Lara Croft: Temples and Tombs from Microgaming is a high variance online slots that introduces casino patrons to the vibrant world of action-heroine Lara Croft. With 243 Ways to Win and 5 reels it pays as much as 7,343x your stake on one spin (non-progressive jackpot) and there’s the Jackpot game with a cash prize of 5,000x your stake. The game skillfully incorporates all the elements the previous Lara Croft slots lacked.

“A bigger world, higher stakes, and an unexpected spin on Lara Croft’s character makes Microgaming’s Lara Craft Temples and Tombs one of its most ambitious projects to date”.

As you awaken a slumbering tomb, ancient mechanisms whir to life the stone face of deity looming ominously over you as you reveal its secrets…

The sheer size and complexity of the 3D slot machine gives it a polished adventure story in a world that aches to be explored. Lara Croft: Temples and Tombs is a raging spectacle with compelling bonus rounds that include a Free Spins bonus that awards up to 80 free falls with 15x multiplier wins, a Rolling Reels feature with progressive multipliers of up to 5x and a Jackpot Feature.

Bets can be made from £0.20 up to £20 per spin at all our best Mobile Casinos. There’s a lot going on here and Microgaming manages to keep all the balls in the air, giving players a wonderfully orchestrated roller coaster ride with a ton of fun.

The premium symbol is Lara Croft with a gun and just her face, 5 of them at any positions on the reels at the maximum wager pays 50x your stake. Other Lara Croft symbols showcase her in various action scenes, i.e diving, rolling and shooting. Lara Croft: Temples and Tombs has a theoretical return to player percentage (RTP) of 96.06%. Once a bonus round is activated the RTP can be as high as 97% plus. 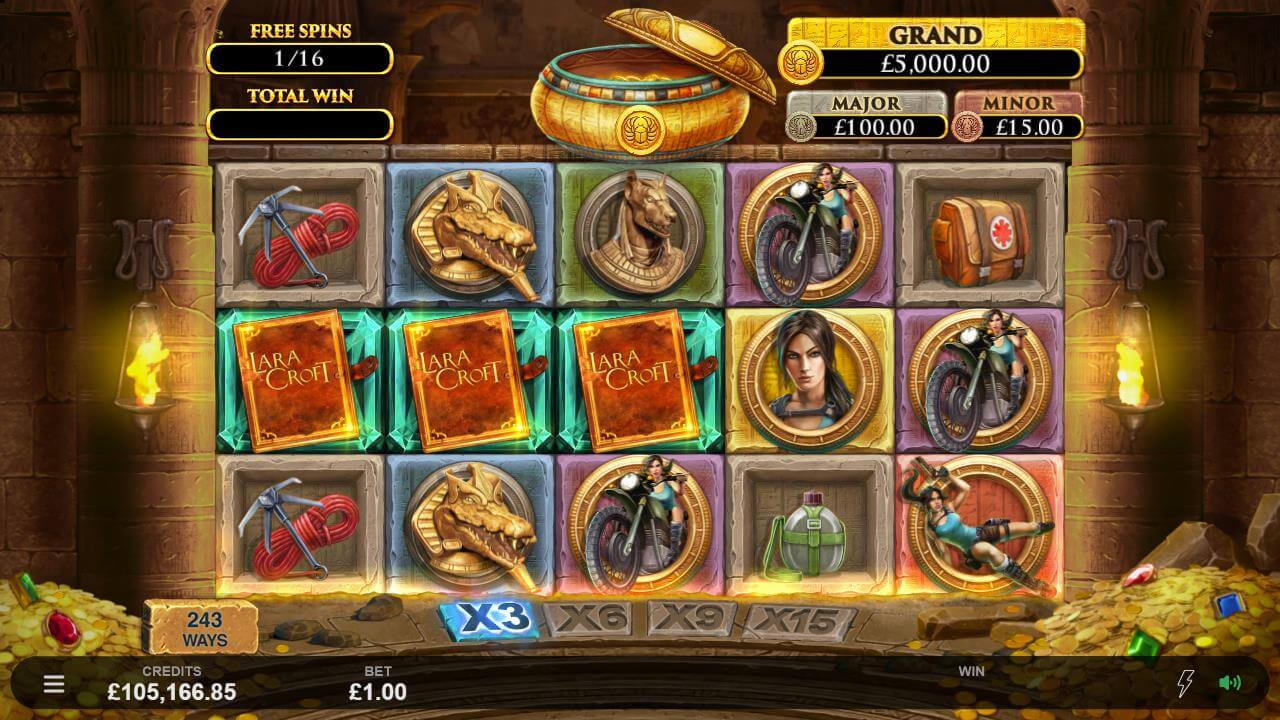 The golden scarab beetle coin is the wild and winning combinations are completed by it when substitutes symbols enter on an adjacent line, except the scatter.

When symbols shatter in a winning combo, they are replaced with new ones that drop in from above giving you a progressive multiplier from 2x, 3x to 5x on each successive winning spin.

The free spins feature is played when 3 or more Book of Secrets Journal scatters pop up in any position across the reels. Depending on the scatter amount you’ll get 8 to 32 free spins. The multiplier increases from 3x, 6x, 9x up to a neat 15x on each free spin win. An extra 8 free falls are awarded when another 3 scatters appear and up to a gargantuan 80 free spins can be gained which makes it a high-paying bonus round.

The Jackpot feature is divided into 3 distinct jackpots: Minor, Major and Grand. It is triggered by the wild symbols you collected and the cash prizes vary from 15x, 100x to 5,000x. 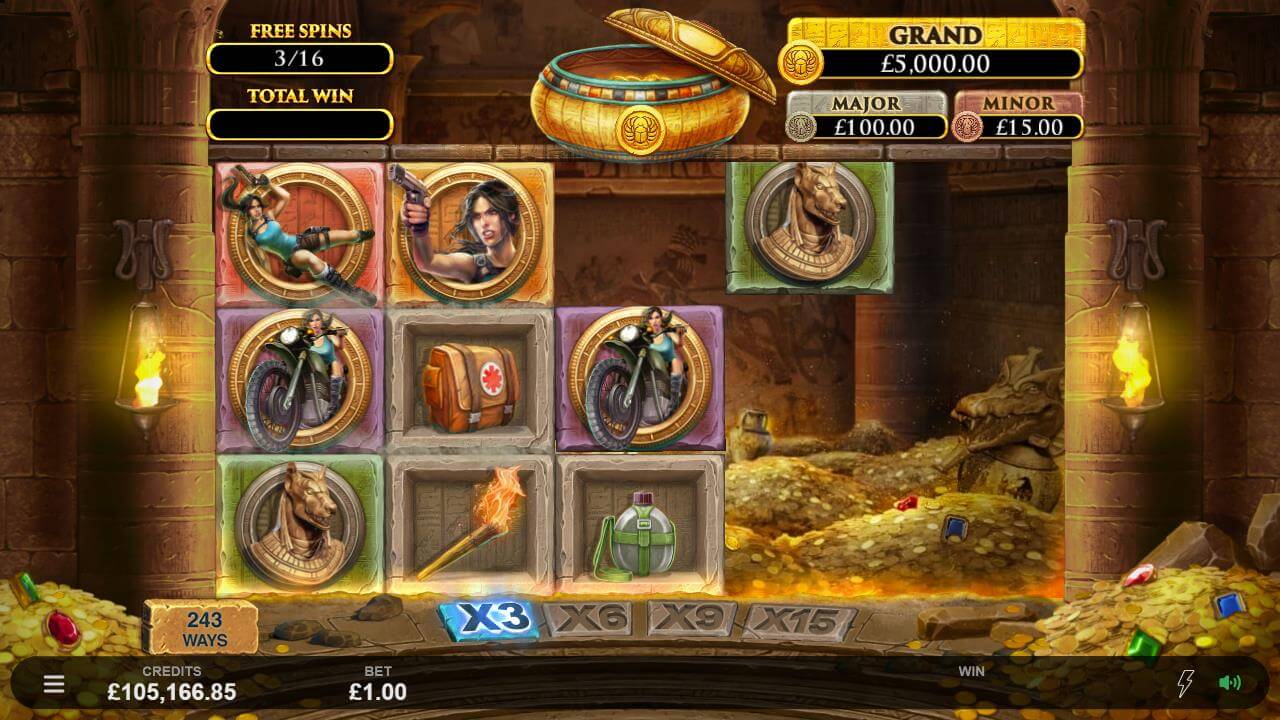 Finally we have a slot machine from Microgaming that crosses the line between high-concept fun, stirringly beautiful visuals, eager to please and has loads of action-set pieces with grounded character exploration. Lara Croft: Temples and Tombs meaningfully wraps up the slots journey where its predecessors ended.

Keep a close eye on those multipliers in the main game (up to 5x) and in the free spins (up to 15x). The Jackpot Feature with its 3 Jackpots adds another exciting dimension to the game but unfortunately they are fixed and not connected to Microgaming’s Mega Moolah series.

Are there previous slot releases from Microgaming or other software houses that are similar?

Microgaming and Triple Edge Studios will most probably be slated because the slots’ mechanic is similar to that of Jungle Jim: El Dorado (https://casinowhizz.com/slots/jungle-jim-el-dorado-slot-review-bonus/) and Net Entertainment’s Gonzo’s Quest.

You have symbols that shatter in a winning combination and they are replaced by new symbols that drop in from above. A multiplier trail from 2x to 5x carves out successive wins while they shoot up to 15x in the Free Spins.

Disappointingly there’s nothing new here in terms of mechanics or slots architecture, but we are happy that Microgaming ventured into calmer waters despite ‘borrowing’ the same mechanic from its previous releases.