Labyrinth of Knossos MultiJump is an online slot from Dreamtech Gaming. It’s not a mainstream slots studio our gut tells us that we’ll see more of their games in future. Yggdrasil teams up with another new slot developer with dazzling effects!

The newest entry from Dreamtech Gaming drops players off into the mystical land of the island of Knosses. Moreover, it’s a great slot with an exciting Free Spins bonus with progressive multipliers. But more importantly, Dreamtech is makes it their own as it introduces players to a new mechanic the MultiJump.

The feedback we received from our visitors has been positive so far. It appears that Dreamtech Gaming is here to stay. We like the games cartoon like graphics which embues the creators with their own artistic liberty.

The reel structure goes beyond the standard 10 paylines with 5 reels, 3 rows and 243 ways to win. That’s more than enough. The game’s theme is all about Greek mythology. Ships, epic heroes of lore and ships, populate the reels; the standard Greek fanfare if you will. The back story is all about the ferocious half man half bull Minotaur that guards the labyrinth. In Greek mythology Theseus slayed the mythical monster.

The jackpot is solid at 4,679x which makes it a high variance slot. The bigger the overall cash prize the more volatile the slot, not so? The coin denomination makes provision for all casino budgets. Players can spin the reels from €0.20 up to €60. If you’re looking for a bunch of decent casinos to play the slots for real money at. Look no further than our trustworthy casinos online for gamblers from Europe.

The hit frequency is 26.24% players can expect a winner on every 4th spin. 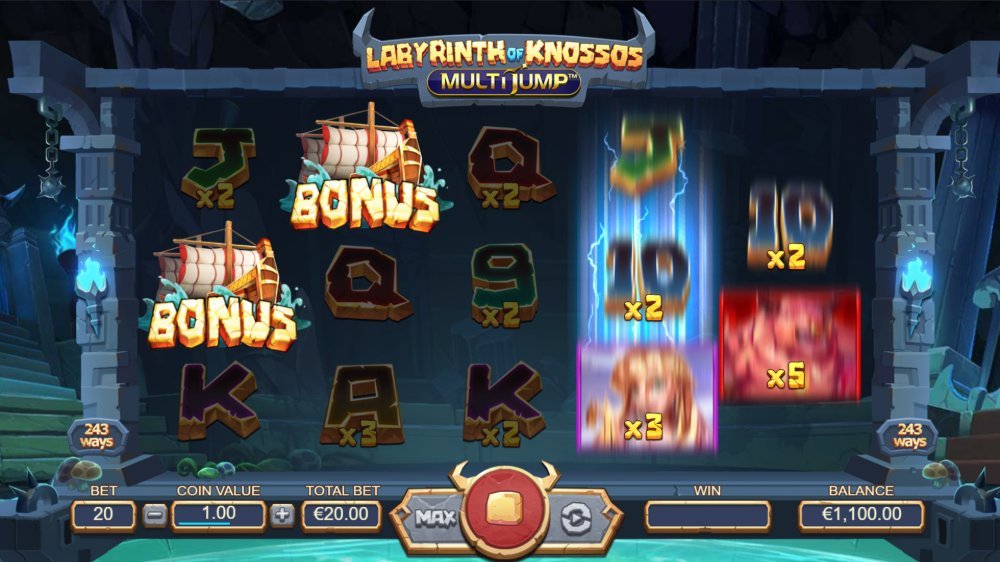 The RTP of Labyrinth of Knossos MultiJump is 96.42%. It’s above the average and it comes with a relatively big jackpot as well. Combine this with the hit rate and the net result is a highly entertaining slot.

We received plenty of wins of 1x to 2x along with the odd big win. Can’t say we’re happy with the symbol pays because they are low. For example, when 5 matching symbols pitch, the payout is 1x or 2x your bet. If you want something more substantial you’ll have to trigger the MultiJump or Free Spins features.

The labyrinth of King Knosses serves as the backdrop for the reel set. The symbols on them start with the card suites from 9 to Ace. The top symbols are swords, shields, and several characters from Greek mythology. Theseus serves as the slot’s Wild. When the wild appears it replaces symbols adjacent to it for winning combos.

The only issue is that it’s not on offer at USA online casinos. If you’re in the mood for a Greek-themed slot there, go for Betsoft’s Take Olympus. It’s awashwith bonus rounds, offers 10 spins cycles, and play pivots around several Greek gods. You can even play it for Bitcoin at our top Bitcoin casinos! 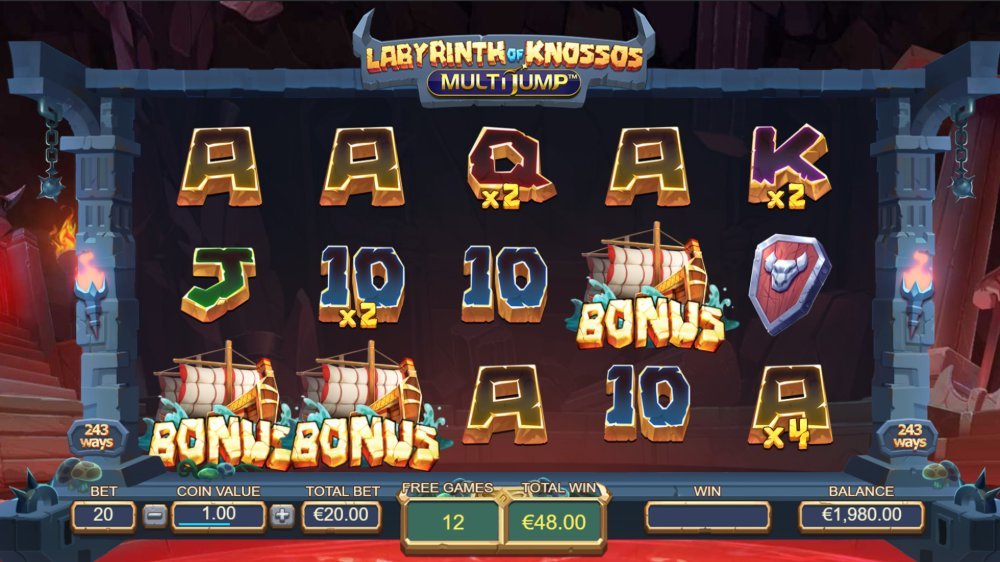 The MultiJump Feature is the main bonus round. In the base game, any symbol can land with a win multiplier. The size of the multiplier attched to the symbol ranges from 2x, 3x, or 5x. Moreover, if you get more than one in a combo, they multiply each other! Hence the reason Dreamtech Gaming calls it the MultiJump feature. The Multipliers Jump like crazy over here!

It’s an interesting free spins because every symbol comes with a free spin win multiplier. Plus, casino patrons can trigger the MultiJump Feature. Most importantly, the multiplier can reach epic proportions of 3,125x.

You can re-trigger extra free spins when another 3 scatters pop during free spins. You can win up to an extra 40 free spins. Then again we have reason to believe unlimited re-triggers are possible. 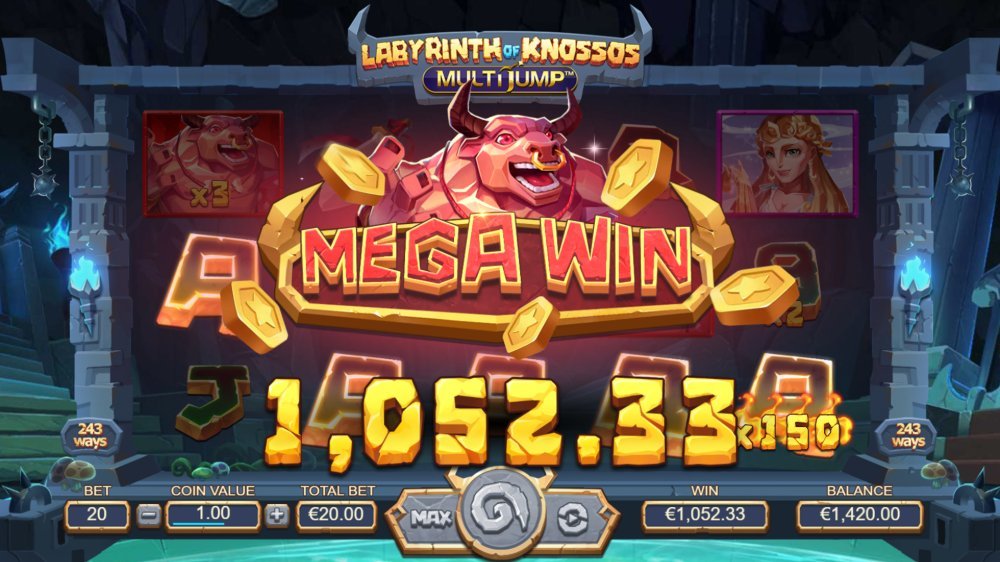 The casino budget we played Labyrinth of Knossos MultiJump with was €300. We decided to play at 24K Casino’s Mobile site for a change. Our bankroll gave us 300 spins at an average stake of 1 credit per spin. To make play more convenient you can use the Auto Play button. The feature spins the reels for you.

Play is tight because we received our first payout of €0.60 on the 6th spin. A bit meh, but such is the Minotaur beast that patrols these virtual reels. Our next payout of €9.90 came on spin 11 as we landed 9 Wilds in total. The payouts in the base game are small and the high variance tag doesn’t help either. The hit rate translates into a winner on every 5th spin. As such it’s not condusive to players with one hand on their bankrolls.

We triggered the free spins bonus on our 147th spin. The going is tough no doubt. The rewards though makes it worth the slog especially if it’s a payout of €150. Luckily for us we managed a small profit of €30 thanks to those lucky multipliers.

Labyrinth of Knossos MultiJump is a game that will rope players in with its easthetics. It won’t serve as an educational tool although its theme is about a popular myth. The game’s high variance tag makes it almost subjective at times. In between our sessions we felt that play became ‘disjointed’ in the base game. Since we received up to 6 non-winning spins which can slate any bankroll.

With a jackpot of more than 4,000x it’s justified it’s just that it leaves a bitter taste. The MultiJump feature is one of the best features we’ve seen in any slot. We like what it does with the multipliers in the free spins as it really jacks up the wins. We’ll even say it rivals that of the Megaways slots system. Moreover, it gives it that all important sense of authenticity.

Labyrinth of Knosses MultiJump engages players with an ancient theme in a fun way. We conclude the slot review with this. Top marks to Dreamtech Gaming and Yggdrasil. If you want to play another slots with a  Greek mythology theme. We recommend Pragmatic Play’s Gates of Olympus.