The Oriental Themed, Koi Princess video slot is 5 reels and 20 paylines powered by Net Entertainment software. With the reels set against the background of an oriental landscape, Koi Princess has an anime vibe with a temple looming in the distance and a girl standing beside the reels. This slot holds a return to player (RTP) of 96.08% and a big non progressive jackpot or 250,000 of your played currency.

As always before setting forth with any game, it is recommended you set your bets which can be set by the “Coin Value” section with the coin denominations ranging from 0.01 to 1. Coins per line, use the “Level” tab and with the maximum bet, use “Max Bet.” To begin play and set the reels in motion, use the “Spin” button represented by the two circular arrows. For continues spins without interruption, use “Autoplay.” Increase your chances of winning a bonus feature or a random feature with use of a “Bonus Bet.” which will activate the bonus bet. 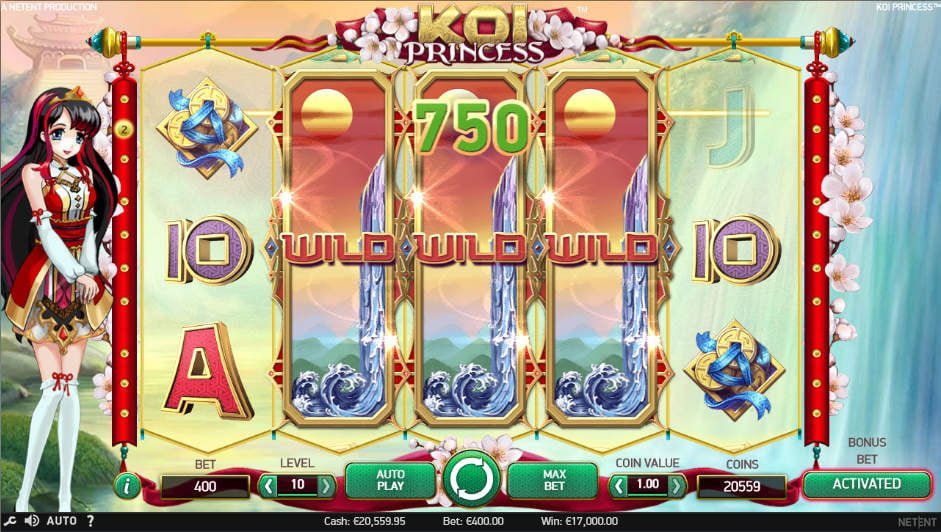 There are a few random features to be aware of with this slot such as 5-hit, Random Wilds, Wild Reels and Bonus Game activation. Get awarded with 1 spin with a guaranteed 5-symbol win with a random symbol and bet line when you activate the 5-hit feature.

Randomly placed on reels, random Wilds will earn you 1 spin with 4 to 9 overlay Wilds placed. Be awarded 1 spin with Wild Reels where 2 to 5 random reels will be covered with overlay Wild symbols. Be awarded with 1 spin with the Bonus Activation feature where 3 Bonus symbols are presented with 1 Bonus Feature randomly awarded.

Earn 10 spins with the Sure Win bonus feature. This cool feature entails that the win for each spin will be at least the same as the largest amount won during the Sure Win session with the exception being for the first spin where the sure win is the amount wagered by the player.

You can be awarded with 10 Free Spins with the Wild Reels Free Spins bonus feature in which each spin between 1 and 5 random reels will be covered with overlay Wilds. After each spin, the amount and/or position can be re-drawn.

Get a chance to win coins and activate 2 other bonus features for in the Free Spins game modes when in the Bonus Wheel feature. There are 12 locations divided by the 3 tiers on the wheel where you must click on the dice to move around the wheel.

And just as the feature suggests, you can be awarded an instant coin win in the Coin Win Bonus feature.