Keystone Kops from IGT is a 30 to 100 payline medium variance progressive jackpot slots that’s eloquently dressed with bonus features ranging from second chances, shuffles, symbol upgrades, multipliers up to 10x, two progressive jackpots and two that’s fixed. It incorporates two (Pie Patrol and Pilfering Pooch) free spins bonus modes with multipliers that shoots up to 10x while the other one offers a potential of 32 wilds.

”The main brass here are the bonus features, sound and design.”

You can start spinning the reels from £0.30 up to £120 per spin be it on mobile phones or PC desktops. It’s not often we see a slots with 5 bonus rounds during the base game not to mention 2 distinct free spins features as well as progressive jackpots. As you can see it’s an exciting slots to play with expertly crafted cartoon like visuals.

The theme of Keystone Cops is about the mishaps of a couple of kops thgat’s expertly portrayed on each reel set. Symbols on the reels are whistles, batons, telephones, hats, kop with a baton, scatters and wild. The symbol that pays the top cash prize is the kop, 5 of them on the reels at the maximum bet pays 125 coins. The average return to player percentage (RTP) of Keystone Kops is 95.6%. 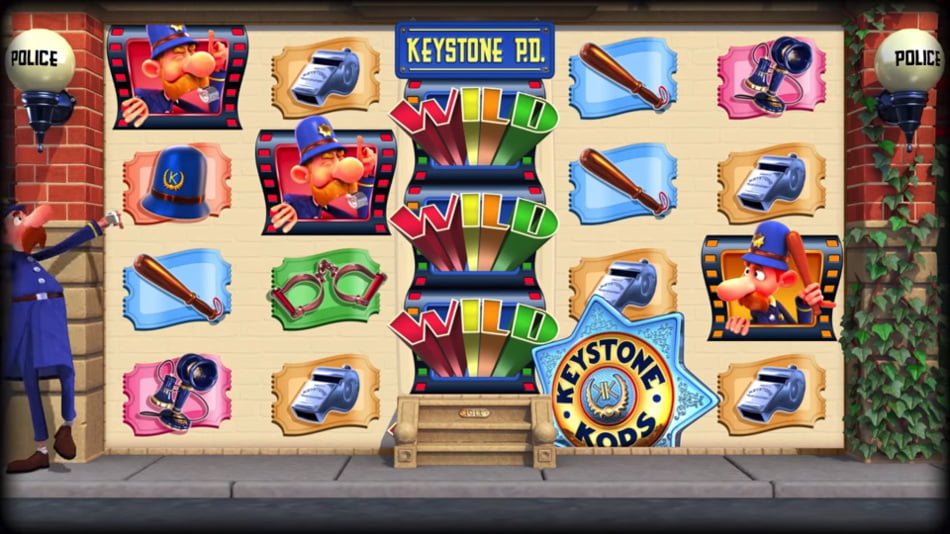 Due to the amount of bonus features the game it’s suitable to players with different bankrolls.

Here’s a quick peek at the different bonus rounds:

The Scuffle Shuffle bonus is played when a wild or any of the 4 kops pitch on the third reel. Just like a deck of cards, the symbols can be shuffled up to 5x times. The scatters, 5 low value and the kop symbols are transformed into the symbol that triggered it.

The feature is played when the Bonus symbols pops up on the second and third reel. The symbols that appears on the fourth reel, one of them becomes a bonus symbol that shoots through to the first and third reels. Basically all the symbols on the 4th and 5th reels are shuffled randomly. 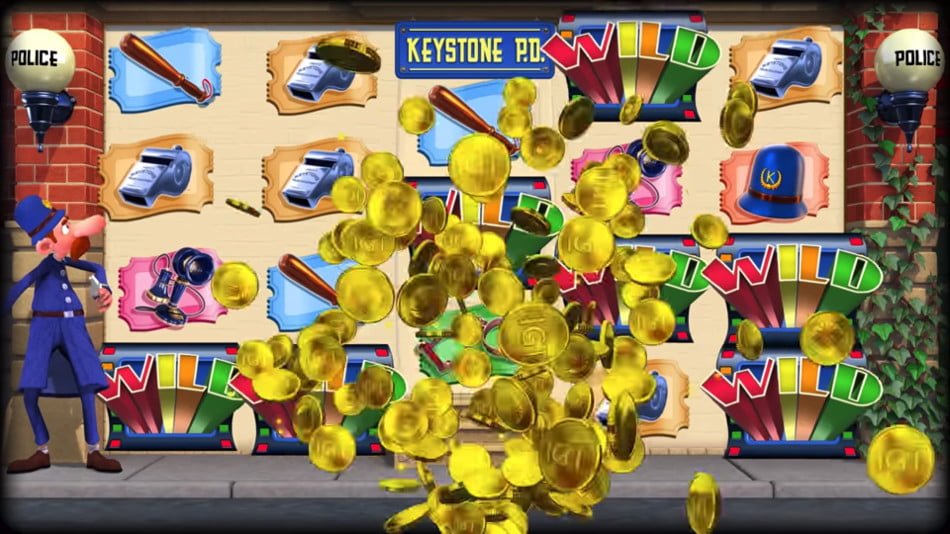 During this bonus feature the multiplier can be anything from 2x to 10x and it’s applied to the Scuffle Shuffle, Symbol Upgrade and Shuffle Up bonus rounds.

The Progressive Picks feature is initiated when the scatter (Keystone Kops badge) pitches on reels 2 and 3 and the Pilfering Pooch symbol on the 4th reel. A new screen opens up displaying vaults that showcases 1 of 2 fixed jackpots and 1 of 2 progressive jackpots. The silver and the gold coins pay as much as 700 coins while the silver or
gold bars triggers the progressive jackpot.

The Pie Patrol Free Spins feature (played on a 100 payline set) is triggered when the scatter (Keystone Kops Badge) appears on the 2nd and 3rd reels along with the vault door scatter on reel 4 – 8 free spins is awarded. Should another 2 or 3 scatters appear you’ll get an extra 2 to 8 free spins.

This is where it becomes interesting. The free spins feature has 2 extra bonus rounds. If the chef’s hat appears on the third reel the Random Wild feature is played. Symbols that appear on the centre reel are turned into wilds. When the pie-man hurls dough at the reels 6 to 32 symbols can be transformed into wilds! Plus, there’s Random Multiplier on each free spin with multipliers from 2x and 10x. All in all it’s a very lucrative free spins feature.

The feature is initiated when the Keystone Kops Badge scatter shows up on reels 2 and 3 and the Pie Patrol scatter on the 4th reel, 8 free spins is given. Extra free spins (2 to 8) are awarded should another 2 or 3 scatters appear. During this free spins bonus the Snaking Wilds feature is activated when a dog symbol pops up, it doesn’t matter on which reel it appears. If a Keystone Kop patrols the reels it transforms a path of 6 to 21 symbols into wilds.

If you’re a fan of the theme don’t miss this game! We also recommend Playtech’s Robocop slot. P.S This slots is a warm blanket that players will love to wrap themselves in.