The Jurassic epoch was a geological period that occurred millions of years ago it’s also known as the age when dinosaurs roamed the earth. The name Jurassic is derived from the Jura Mountains within the European Alps because limestone strata associated with the era was first identified here. Microgaming once again brings to life these majestic reptiles to the reels of virtual gaming and believe me it does not disappoint. The video slots is based on Steven Spielberg’s epic 1993 film Jurassic Park. If you’re up for a bit of action-packed game play sink your teeth into this one.

”A slots machine has never been so intimidating, fun and exciting to play!” Casinowhizz.com

Aside from its impressive game mechanics the standout feature for me is its ‘Parallax Scrolling Effect’ which really makes the slots pop. As you play, actual footage (Cinematic clips) from Spielberg’s epic film is shown, so sit back, relax and enjoy. The theme of the slots plays off in a tropical jungle teeming with all kinds of dinosaurs.

Jurassic Park features 243 paylines, 5 reels and offers a top non-progressive jackpot payout of 1,500 coins. The average return to player (RTP) percentage to the player is 96.7% but payouts increase significantly during the free spins bonus mode. The base game introduces a special treat known as the T-Rex Alert Mode- it’s triggered randomly while up to 35 wild icons can be added to the reel which lasts for up to 6 spins. On the third spin the mighty T-Rex can be seen against the backdrop of the reels. 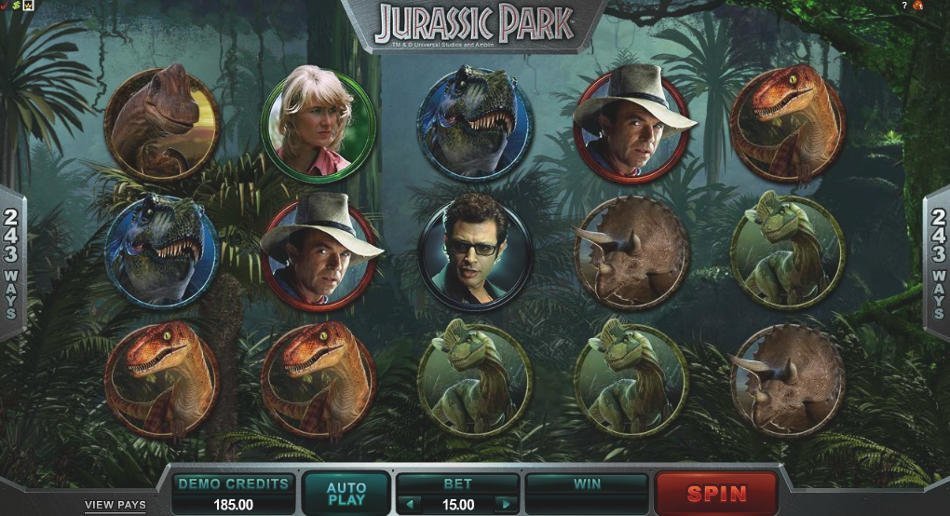 The coin range is just as diverse as the Jurassic period, bets can be made from £$0.30 up to £15 per spin making the slots ideal to low-stake and high value players.

The scatter icon is the mosquito in yellow resin, three of more of them triggers the Free Spins bonus mode. In total there are 5 free spins features each with its own audio and cash rewards. Free spin wins are further augmented by mini-features such as wild multipliers, running wilds, multiplier wins and even split wilds-it’s my favourite one of the lot!

The first free spins mode starts with the Tyrannosaurus Rex laced with wild reels (3 of them) which turns any adjacent symbol into wilds. When the T-Rex symbol appears you’re guaranteed a win. Once you’ve entered the free spins features 25 times or more it sets you up to play the other free spins modes-you can choose the free spins mode that suits you bets. Up to 12 free spins can be won during each feature.

This is the second free spins feature which splits wild multipliers and wilds. The feature you should shoot for is the split wilds since it pays out more, up to 6 winning combinations can be created, not bad. As the name implies the multiplier wilds pays out as much as 4x, 5x, up to 6x your stake. The Velociraptor icons is stacked three symbols deep on the reels.

If you don’t know what a Brachiosaurus is it’s one of the biggest dinosaurs (if not the biggest) that ever lived. Just to give you an idea of how big it was it could reach heights of up to 85 feet and ate an incredible 200 to 400 kilograms of plants every day! The Brachiosaurus free spins mode does its namesake justice since it comes with multiplier wins from 2x, 3x, 3x, 4x, up to 6x-the 6x multiplier can be active for as long as 6 spins! This free spins mode can be re-triggered.

Triceratops first appeared 68 million years ago in North America during the Maastrichtian stage and was a herbivorous ceratopsid dinosaur. The Triceratops free spins mode comes with a stack of re-spins, random nudges and running wilds. If the running wilds pitches on the reels 1 wild is added to every free spin, there are 3 symbols on each stack. The wilds become sticky and remain locked to the reels offering additional re-spins.

This is the last free spins bonus mode but certainly not the least, I’ve dubbed it the ‘winning wilds’. Dilophosaurus was a flesh-eating dinosaur and most probably the least understood one of the lot. If the Dilophosaurus appears on the reels it splits the symbol by turning it into a wild. If the winning wild appears in a winning combination it appears static offering additional wins.

Microgaming’s Jurassic Park video slots is a fantastic game but payouts could have been a tad more during the free spins modes. That said, it’s a medium variance game that’s visually brilliant, entertaining and has the ability to pay out a staggering 6,000 times your stake. The biggest win I managed was 25x my stake during the T-Rex free spins. Also, before you can pick the bonus of your choice you must hit bonus feature 25 times.