Jungle Jim and the Lost Sphinx

Microgaming’s online slot machine releases are no longer as good as the ones it released in its heyday. However, there is no denying that the premier developer of online casino games is staging a comeback. Remember Jungle Jim Eldorado which it released in 2016? Online slots critics labeled it a clone of NetEnt’s Gonzo’s Quest. Make no mistake; it is still a cracking slots. It just didn’t reach the same heights as Gonzo’s Quest.

With all that being said, Microgaming decided to give it another go with Jungle Jim and The Lost Sphinx, the sequel to Jungle Jim Eldorado. Not only is the volatility higher with improved features, the jackpot of 6,250x (£125,000) your stake on each free spin is bigger too! The minimum bet per spin is £$0.10 to £$20, playable at our instant cash-out Android Casinos.

“Given the success and popularity of Jungle Jim El Dorado, we are really looking forward to teasing the iconic character’s next outing, this week at iGB Live! The new game includes outstanding artwork and entertaining mechanics, including the popular Rolling Reels feature and Stormcraft Studios have set a new benchmark in visual storytelling in our industry.” Jean-Luc Ferriere, the Chief Commercial Officer at Microgaming.

Jungle Jim and the Lost Sphinx is a high-variance adventure-themed video slot that has 5 reels, 4-5 rows and 35-50 paylines. It’s another team effort between Microgaming and Stormcraft Studios. Stormcraft Studios didn’t cover itself in glory with the release of Agent Jane Blond. Had it been a movie, it would have bombed miserably at the box office.

So, let’s pop the hood of Jungle Jim and the Lost Sphinx to see what’s hiding beneath. Instead of searching for the lost city of gold, Jungle Jim finds himself in the Valley of the Kings hunting for Ancient Egyptian tombs and, of course, treasure. With Rolling Reels™, Multiplier Trails, a Free Spins bonus round that awards 12 free falls and multipliers of up to 20x, the game looks very promising.

A starry sky with sand dunes serves as the backdrop for the reels. With a pulsating Egyptian audio track that’s in sync with the reels,  play chugs along at a steady pace. Symbols that appear on the reels include various gemstones, Book of the Dead, Jim, pots, chests laden with treasure and the Wild logo. Jim is the premium symbol and 5 of them any position on an active payline pays 10x your stake.

The average RTP percentage of Jungle Jim and the Lost Sphinx fluctuates between 96.10% to 96.30%. 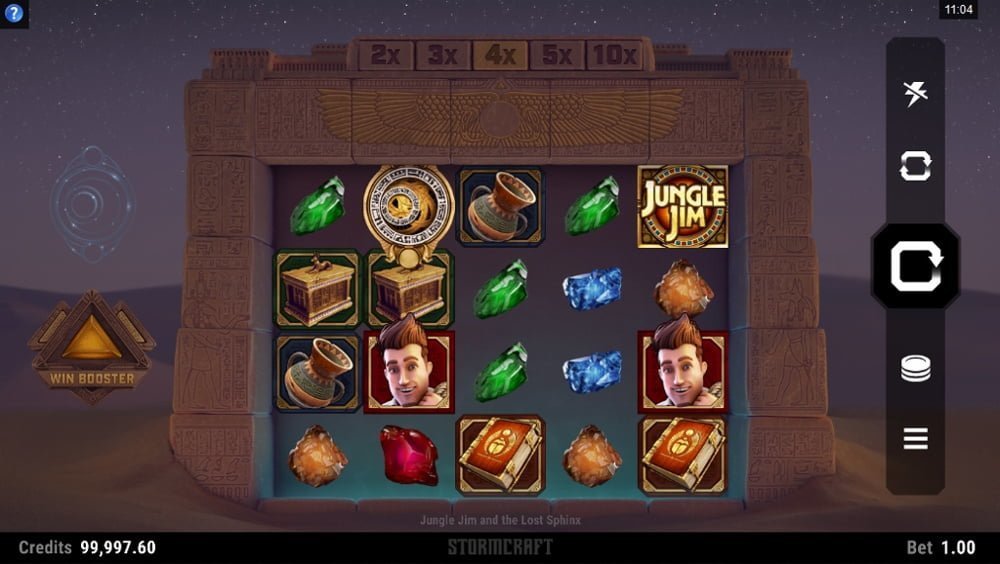 The Wild symbols replace adjacent symbols, except for the scatter when it forms a winning combination. The symbol appears on all the reels except the first one.

Jungle Jim and the Lost Sphinx employ cascading reels or Rolling Reels™. Just like Jungle Jim, winning symbols are removed from the reels and are replaced by new ones that drop in from the top. On each winning spin, the multiplier increases. The standard reel set plays out on a 5×3 reel with 35 paylines. Multiplier levels increase as follow:

Usually, the trail resets back to 0 on a losing spin. Microgaming / Stormcraft Studios added a Second Chance Re-spin feature which rewards you with a re-spin after a losing spin on the 3rd roll. This function helps players to move onto the level 4 multiplier.

The Free Spins feature is triggered by 3, 4 or 5 scatters that awards 5x, 10x or 20x your stake along with 12 Free Spins. Alternatively, you can use the ‘Win Booster’ feature (at a cost) which adds an extra scatter to the reels which increases your chances of trigger the free spins.

Keep a close eye on the Spinx since it only pitches on the centre reel. A new cascade and a free spin are awarded once you have collected 6x Sphinx symbols. Because the symbols and the Wild appear partially stacked on the reels, the jackpot prize of 6,250x your stake in conjunction with a multiplier of 20x is won here.

Jungle Jim and the Lost Sphinx retains the same elements as the original, albeit slightly better and with more volatility. The Cascading Reel mechanic with its progressive multipliers awards decent payouts in the base game, especially in the free spins when you hit a multiplier of 20x for a payout of 6,250x your stake. Luckily it’s not a coin toss-up between this one and the original, because Jungle Jim and the Lost Sphinx is hands down our favourite.

How Many Bonus Features Are There?

Which Bonus Round Is The Best?

The Free Spins feature is excellent because the jackpot of 6,250x your stake can be won on a single free spin, providing you hit a 20x multiplier. You can also increase your odds when triggering the free spins by activating the ‘Win Booster’ feature. It adds an extra scatter to the reels, and you need 3 or more scatters to get into the feature.