Most online casinos now offer a steady library of NetEnt games divided into different categories. Of all their games it’s the 3D slot machines that tops my list. NetEnt the world’s leading developer of online casino games just released Jimi Hendrix online slots. The game is pretty similar to Guns N’ Roses. It comes with loads of free spins bonus games, scatters and a wild substitution (Jimi Hendrix icon). The game offers a theoretical return to player (RTP) of 97% to the player and a jackpot payout of 80,000 coins.

I’d like to give you a brief overview about this iconic rock legend. James Marshall “Jimi” Hendrix was an American singer, songwriter and rock guitarist. Born on 27 November 1942 and passed away September 18, 1970. Many regard Hendrix as the most celebrated electrical guitarist of all time even though his career only spanned 4 years. The Rock and Roll Hall of Fame dubbed him as “arguably the greatest instrumentalist in the history of rock music”. When I played the game the first thing that came to mind was Woodstock and the laid back era of the 1960s. Classic songs that make up the game’s audio are Purple Haze, Little Wing and Crosstown Traffic. As you start playing you can hear the music legend’s greatest hits blaring across the reels.

Subsequent the release of Guns N’ Roses, Jimi Hendrix is NetEnt’s second music-themed slots. The game can be played for free or for real cash on all devices including mobile and desktop. It features 20 paylines, 5 reels and celebrates this iconic legend’s life across the reels. It comes with 6 bonus games of which 2 can be triggered randomly during the base game. Then there’s the much celebrated ”Pick Me” bonus game. The Jimi Hendrix symbol offers the highest payout during the base game. Five of them at the maximum bet per spin offers a payout of 400 coins. 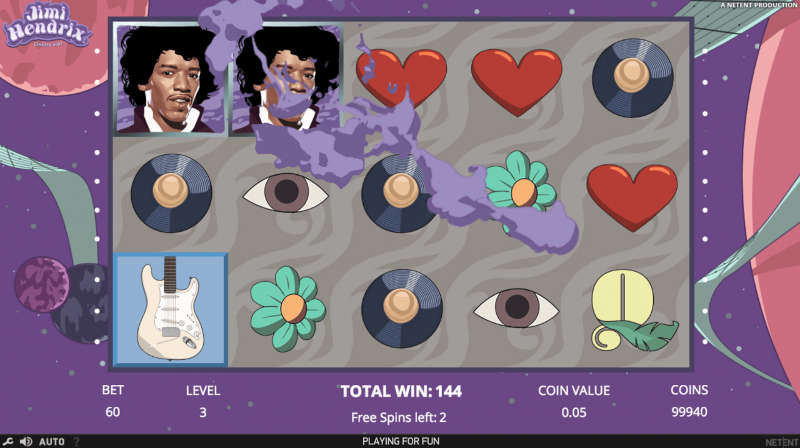 Jimi Hendrix 3D slots is a great game but not as entertaining as Guns N’ Roses. It’s a medium to high variance game where most of the payouts occur during the main game. Of the three free spins bonus games the Purple Haze game is the most lucrative. On one free spin up to 5 wilds can appear. When this happens you can win up to 400x your stake. In the graphic department Jimi Hendrix receives top marks from me. With its psychedelic theme I think players will find it a smashing slots. Overall it’s a well balanced game coupled with loads of free spins.