Once in a while a video slots comes along and knocks the living daylights out of its competitors. Immortal Romance is a 3D slot from Microgaming. With 243 paylines, 5 reels and a massive non-progressive jackpot of 3,645,000 coins it’s going to be very difficult to trump.

As if this is not enough the house edge of the slots is 4% and it features 4-tiered bonus (free spins) games. The game is further amplified by a soundtrack that’s not only eerie but scary too. The graphics are sublime and the game play is simply flawless. It can be played for free or for real cash on all mobile phones and computer desktops.

Immortal Romance has a vampire theme to it albeit one with a ”dark take of love and intrigue”. What are the key features to look out for? The first one is the ‘Wild Desire’ which is randomly triggered but the star of the game is its ‘Camber of Spins’ feature. It’s triggered when you hit 3 or more Lion Door Knocker icons. What makes this feature tops is that it comprises of 4 levels each with its own character: Amber, Michael, Troy and Sarah. The good news is that the free spins can be re-triggered. 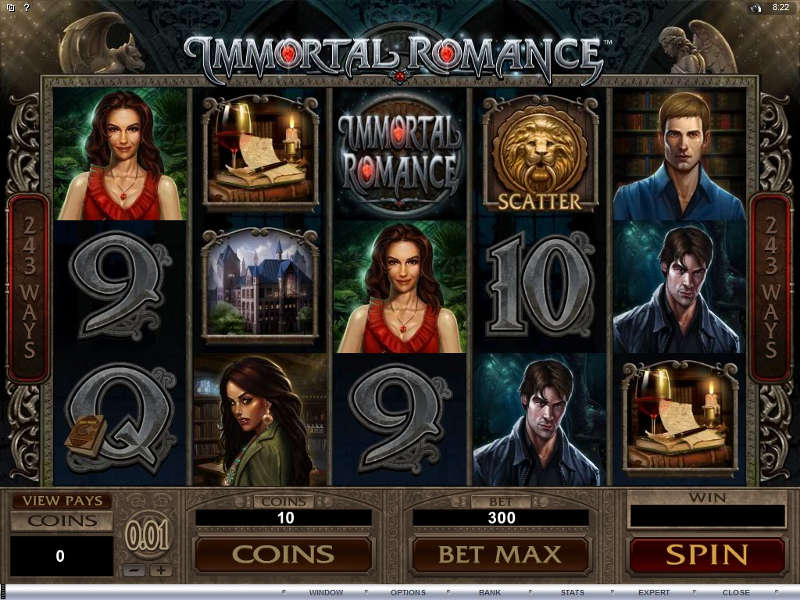 Before you get embroiled in the game’s supernatural love theme get your betting options sorted first. The coin range is 0.01 up to 0.2. Bets can be made from £$0.3 up to £$6.

Immortal Romance is a spellbinding slots that’s entwined with so many twists and turns that it will leave you gasping for air. The game’s mechanics, payouts and characterization are well-balanced and not forced making it a spectacular game to play. The standout features of the game is the Michael and Sarah free spins games and then there’s the huge jackpot of 3,645,000 coins.