Hercules & Pegasus is a 20 payline, 5 reel and 3 row, medium to high variance video slot powered by Pragmatic Play. The visual fidelity of the slots is seriously good! Come to think of it, it is more akin to watching a Disney animation film unfold before your eyes than playing a slot machine.

If we peel away the layers, we see that it has a Greek mythology theme and a winning potential (non-progressive jackpot) of 2,500x (£$250,000) your stake on a single spin. Furthermore, built into its mechanic are Hercules and Pegasus wilds with 2x multipliers, transforming Zeus symbols and 3 Free Spins features with multipliers that can reach as high as 5x. As you can see, it’s quite a busy slots!

The action starts with £$0.20 up to £$100 per spin, and it is playable on Android, iOS and tablet devices. Pragmatic Play’s Aladdin and the Sorcerer is equally impressive and chockablock with free spins and multipliers. Should you have some extra cash lying around, take a peek at it. The game can now be played at all our leading UK online casinos. 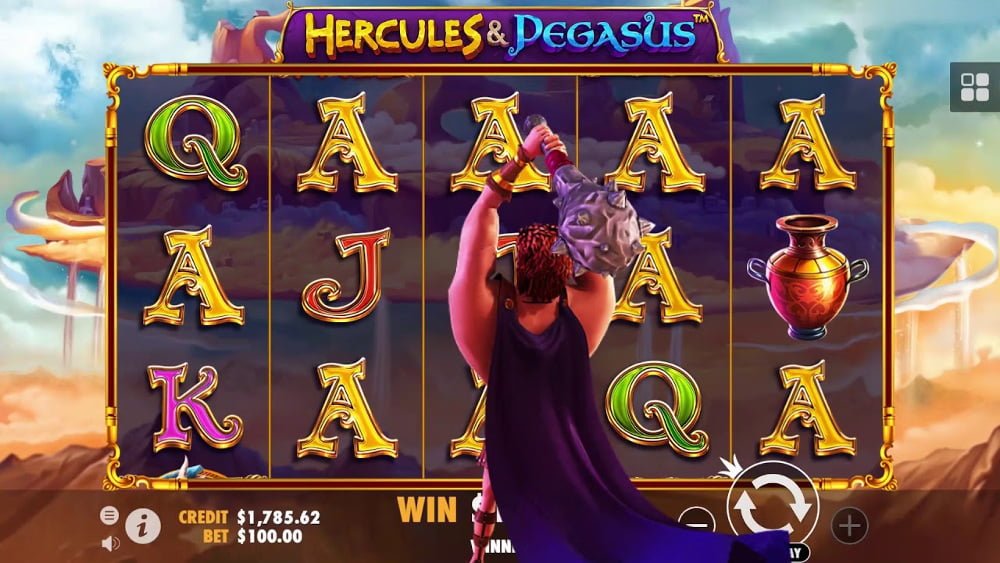 You’ll notice that 3 wilds pop up sporadically. They are the Hercules, standard wild and the Pegasus wild. When they appear, they form winning combinations by substituting symbols adjacent to them. The Hercules and Pegasus wild also offers a cash prize of 25x your stake when 5 of them appear.

The base gameplay is further enhanced when 3 scrolls appear. They hover above the reels, offering one of the following randomly triggered features:

When the Bonus symbol pops up in reels 1 and 3 as well as the Pegasus Bonus on reel 5, you’ll trigger the Pegasus Free Spins bonus. When a group of blue potion bottle symbols appear on the 5th reel, an unlimited amount of free spins will be awarded. For every blue bottle potion symbols that pitches, the multiplier increases by 1x up to a maximum of 5x. The free spins feature ends when the 5th blue potion bottle appears.

Hercules and Pegasus is another cracking 3D slots from Pragmatic Play. Don’t underestimate it just because it’s a pretty face. Beneath its sharp exterior is a high variance slots that will tame any reckless play. On the bright side, if you strike a fistful of wilds during the free spins, not only will you unlock the maximum win multiplier of 5x, but you’ll also win the jackpot of 2,500x your stake. If you enjoyed the game, we recommend NetEnt’s Arcane Reel Chaos.

How Many Bonus Rounds Does It Have?

The main game has 4 bonus modes that can be triggered on any random spin. They include Hercules and Pegasus wilds with 2x multipliers, transforming Zeus symbols and three Free Spins features where an unlimited amount of free spins with wilds can be gained with a top multiplier of 5x.

Can I Play The Game On My Mobile Phone?

Yes, you can. Certain Android Casinos will prompt you to download their app at the Google Play store first while others allow you to play the game in your phone’s browser.

Is There a Winning Strategy I Can Use To Win?

Unfortunately, there is no winning strategy because each spin is governed by a random number generator (RNG). You can improve your chances at winning by accepting the casino’s welcome bonus, setting a bankroll aside and grinding until you trigger the Free Spins. Obviously, all this must be done within the ambit of sensible play and within the confines of your bankroll.

Do I Need a Specific Budget Before I Can Play Hercules & Pegasus?