Helloween is a video slot from Play’n Go and one that will make your head spin with its theme. Looking at the title, one would think that it’s perhaps another slot machine with a Halloween theme. It’s not entirely about Halloween. Instead, it’s a slot that builds on the German power metal band, Helloween.

To be honest, the theme threw us a bit because we expected an online slot with a Halloween theme. Not so. One thing that catches our attention though is the simple reel set up Play’n Go employs here again. Its previous release Rabbit Hole Riches has 3 reels and 5 paylines. It appears that the slot developer for real cash is going through a phase here.

Be that as it may. Helloween is the most enigmatic of the bunch! You’ll love it even more when you hear the Keeper of the Seven Keys albums blare across the speakers.

The slots for real money has 5 reels, 3 rows, and 10 paylines. Needless to say, we don’t expect anything more from online slot machines with metal themes. The entry-level is £0.10 to £100 per spin. You can play Helloween at any of our trustworthy mobile casinos. Just for stopping by, they’ll throw in plenty of extras such as a bonus, free spins, and comps.

The maximum earning potential of the Helloween slot machine is 5,000x (£500,000) your stake. So, even if you’re not a fan of the genre. The jackpot in itself will draw you in like bees to honey. 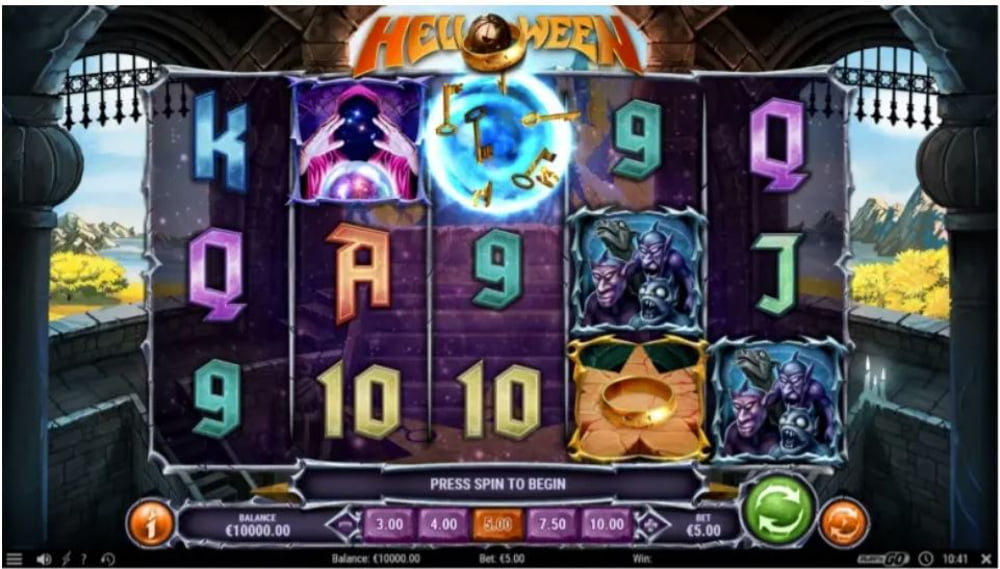 The math model is soft enough since it’s of medium variance. The RTP of Helloween is 96.20% which is just about right. The graphics of Helloween draws its inspiration from their Keeper of the Seven Keys albums.

The low-value symbols are the usual card ranks. While the high-value symbols are pumpkins, goblins, and wizards. The production values are above average and the slot’s audio is the real highlight. There are real tracks from Helloween here, after all!

If you’re into the real Mckoy take a look at RealTime Gaming’s Witchy Wins slots. It offers real money slot players a jackpot of 10,000x. Free Spins with Wild Reels and Multiplier Wilds of up to 4x! You can play the slot machine at our trustworthy online casinos in Australia. Once you sign up. You qualify automatically for a bonus, and free spins.

Once you find three of the slot’s Scatters on reels 1, 3, and 5. You’ll unlock the Keeper of the Seven Keys Feature Wheel. This will lead to one of seven different free spins features. Bear in mind, of the lot, only one offers 5 free spins, but with a twist though.

The I’m Alive option has Spreading Wilds that expand up or down. Once they cover an entire reel, they disappear.

The Future Wild option has Wilds that can land on the grid and expand to cover entire reels.

The Dr. Stein option selects random low-value symbols. Then, it transforms them into Wilds, improving your winning chances.

The Eagle Fly Free option has Wilds that stick to the reels until the feature ends. They also change positions on each spin, which is nice.

The I Want Out option has Wilds that can land and swallow symbols around them. When they do, they become 2×2 Wilds – not bad to be honest.

The March of Time option has Wilds. Not only do the wilds stick to the reels; they shift to the left with each spin until they drop off the reels.

At the end of any feature, you can also trigger the Helloween Multiplier modifier. It’s a straightforward yet exciting feature. Helloween throws in a random win multiplier to your total win. As a result, you can score multiplier wins from 2x, 3x, 5x, up to 10x.

Helloween is one of the best music-branded slots we’ve played for 2020 thus far. Granted, we’re not into metal slots but we enjoyed the tricks and treats of it. Or, so to speak.

Play’n GO carves out a niche of its own and it most certainly ramps up the volume! More importantly, it jazzes up play with a top-notch soundtrack and 7 free spins features!

If you want to play another online slots with a metal theme. We also recommend, Play’n Go’s Testament. It tees off with the same recipe as Helloween by offering you a jackpot of 20,000x. Plus, it throws in plenty of special features.