Great Rhino Deluxe from Pragmatic Play might not be a looker but it packs a mean punch. If you have a proclivity for the African plains then the slots for real cash online is for you. One thing we know by now if the visuals aren’t that hot the pays are usually big! And, this is exactly what Great Rhino Deluxe does. It offers a non-progressive jackpot of 6,242x your stake. The Super Re-spin feature hosts the Grand Jackpot of 500x your stake.

We totally dig it that it offers a Super Re-spins, Free Spins, and Rhino Coin Wilds. Play pivots around the Rhino. Therefore, when you see the majestic animal on the reel set the payout can be good. You can now play Great Rhino Deluxe from £0.20 to £100 per spin at our UKGC top online casinos. Before you risk real money play the free slots versions. Also, write down your playing experience. In other words, how many spins it took you to trigger the free spins, and so forth. After you played it with free credits. You’ll know more or less how much money you need to unlock its special features.

Great Rhino Deluxe contains 20 paylines, and 5 reels. The reel set up is rather standard, however, we see on the label that it’s a Megaways slots? Before we dive into the specifics, Pragmatic Play is on a Spring cleaning mission. Its previous release The Doghouse Megaways Slots could be one of its best releases this year. Just like The Dog House, it touches up Great Rhino Deluxe with the classic Megaways system. With that in mind let’s explore the remainder of the features. 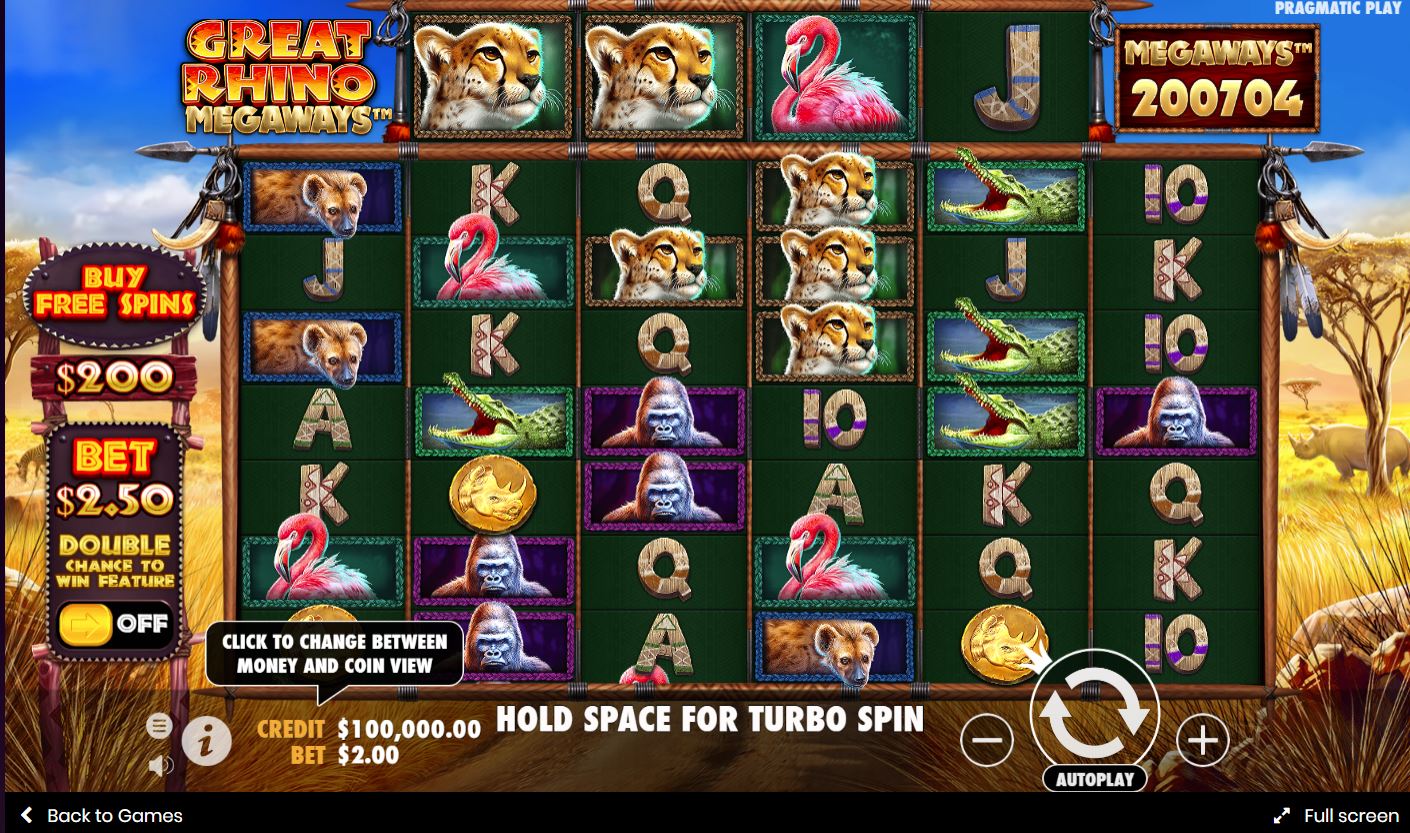 The RTP of Great Rhino Deluxe is 96.50% which is good for a medium variance Megaways Slots. We anticipate the Hit Frequency to be 25%. Meaning you’ll receive a payout on every 4 to 7 spins. Our top USA online casinos also dish up real money slot machines with Safari themes. So, be sure to check them out.

An African plain serves as the backdrop for the reel set. The symbols on the reels are pelicans, gorillas, hyenas, crocodiles, leopards, and the rhino. The remainder of the symbols are the Q, K, and the Ace. All we can say is watch the Rhino! When you land a full screen of Rhino wild you’ll win the jackpot of 6,242x your stake. The African Tree symbol is the other important symbol because a few of them triggers the Free Spins feature. 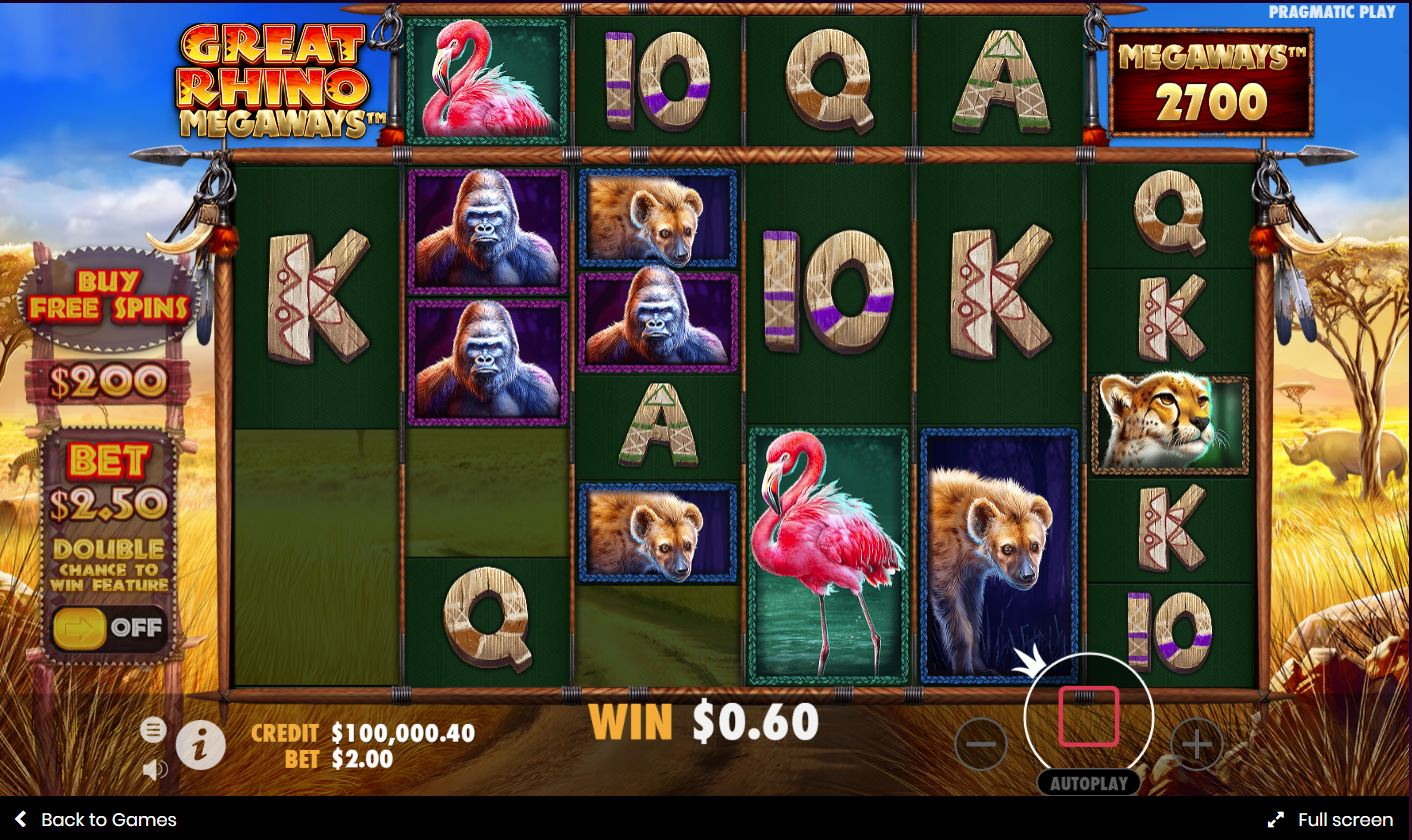 The Rhino symbol is the Wild. During winning combinations it substitutes symbols adjacent to it. It also appears stacked on the reels.

You’ll trigger the Super Re-spin feature when two Rhino stacked wilds appear in view. The Rhino symbols stick to the reels while the remainder of the reels re-spin. You’ll receive three re-spins. The interesting bit about the Re-spins feature is that only the Rhino symbols pitch and the reels are blank.

For every new Rhino sticky wild that appears, you’ll receive an extra re-spin. But, there is more to the Rhino symbol too. The Rhino carries a multiplier of 2x, and a bunch of them can trigger any of the fixed jackpots. For example, when 14 Rhinos pitch, you’ll win the Major Jackpot of 375x your stake. Should you land 15 of them you’ll win the Grand Jackpot which offers a cash prize of 500x your stake.

The Gold Rhino Coin Wild is the other ‘heavy lifter’ because when it pops up; it offers winning combos of up to 25x your stake.

To unlock the Free Spins feature you need three African Tree scatters. Note, the only appears on reels 2, 3, and 4, and they trigger 10 Free Spins. For every Rhino symbol, you collect during the free spins, pitch on your final spin.

We don’t have to tell you that the payout can be astronomical on your final spin. Not to mention the payouts you collected prior to your final free spin. Just a pity Pragmatic Play though it wise not to include the Super Re-spin in the Free Spins feature. Okay, that’s just us taking a stab at Pragmatic Play for not taking it to the next level. Other than that, it’s a cracking free spins feature that stands and delivers.

How many spins must slot players for real cash make to initiate the Free Spins? Since it’s a medium variance Megaways slots, you can work on 40 to 50 spins. Payouts in the free spins range from 30x up to 6,242x your stake.

Great Rhino Deluxe has all the amenities of a potential ‘slot buster’. There’s the jackpot of 6,242x your stake which you’ll win when a full screen of Rhino symbols pitch. Or, you can win it during the Free Spins. Just to jog your memory, each Rhino symbol carries a 2x multiplier. A Super Re-spin feature allows you to win two jackpots, albeit it fixed. The only caveat we have is that Pragmatic Play excluded it from the Free Spins feature.

At least they keep the pot boiling because the Free Spins has its special place as well. All the Rhinos you accumulated during the feature pop up on your final free spin for the last big ‘hoorah’. We’re not sure if you can re-trigger the Free Spins should another 3 or more scatters appear. In all probability it’s possible, but we’ll leave it there for now. We also recommend, King Tusk.