Grand Loot is a video slot from Pariplay that has 5 reels, 4 rows, and 40 paylines. The theme of the slot welcomes you not only with a vibrant crime theme but with a huge jackpot. The top jackpot is 50,000x your stake, so there’s plenty of winning potential!

The volatility is high which makes sense because it matches the jackpot. Therefore, it clocks a 9/10 on our Whizz scale. The slot for real money is similar to Money Train 2 and Cash Bandits 3.

The hit frequency is 21.53% meaning casino players can expect a payout on every 5th spin. Pariplay kits Grand Loot with a Grand Loot Bonus. The coin denomination is not that high since Grand Loot is a progressive jackpot slot. Players can spin the reels from $/£/€0.50 to $/£/€5.

To get a taste of the crime life. Players can play the slot for free or for money at our top casinos online for Canadians. Their games load seamlessly on mobile phones, and they list hundreds of slots. 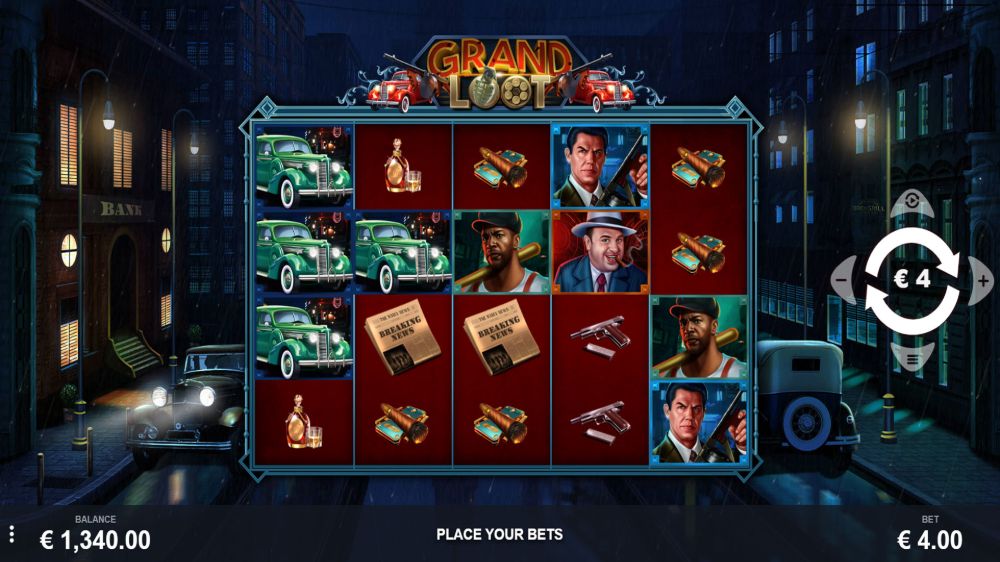 The RTP of Grand Loot is 94.24% but it can fluctuate. The reason why it fluctuates is that online casinos can change the payback rate as they see fit.

The visual arrangement of Grand Loot is off the charts. In other words, the game looks like a million dollars graphically. The symbols that appear on the reels are the card suits and the various crime bosses. A cityscape serves as the backdrop for the reels.

Moreover, the top symbols are cigars, whiskey bottles, newspapers, wilds, guns, and mafia bosses. The highest paying symbol is the lady in red. Not only does she serves as the game’s wild. But, for a full line, she offers a cash prize of 10x. The game’s audio track bobs and weaves with the payouts. As you rake in the big wins the more animated the music becomes. 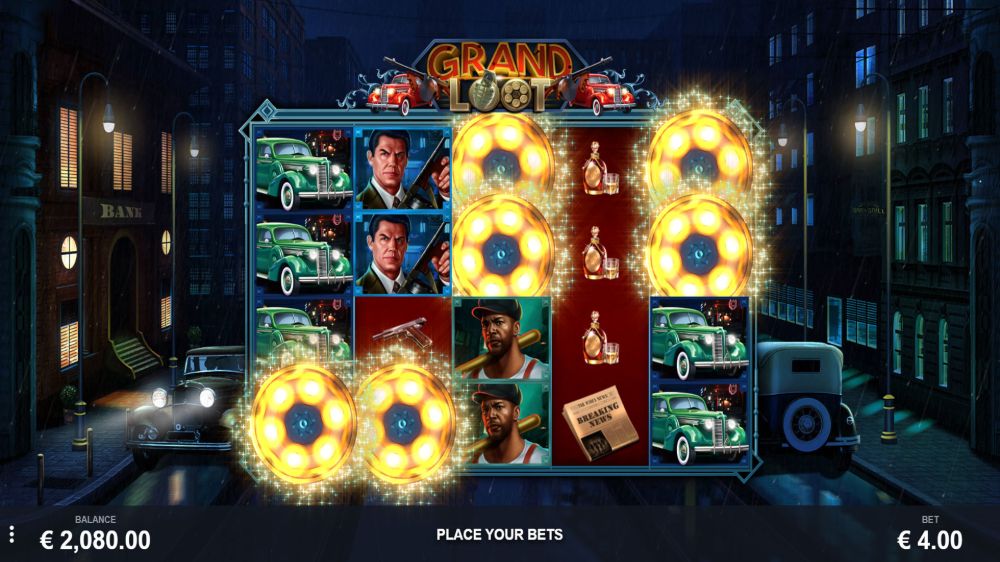 We already mentioned that Grand Loot only has a single bonus round namely the Grand Loot Bonus. It serves as the slot’s best attribute but reduces its appeal slightly because it’s not easy to trigger. Be that as it may if you want the big wins you’ll have to initiate it.

You’ll trigger the Grand Loot bonus when 6 or more scatters pitch. This is where the slot comes alive and the fun begins. It’s your classic hold-and-win scenario that offers 3 re-spins, bet multipliers, and high pays. Keep in mind many reels have empty spaces.

More importantly, the symbols that land stick to the reels and reset the number of re-spins back to 3 again. The high-value symbols don’t offer any payouts. Instead, they offer you 5 options:

Furthermore, you’ll snag a 2x win multiplier for all the reel symbols when you fill a reel with symbols. Once you completed your re-spins you’ll receive a payout and the base game will commence. 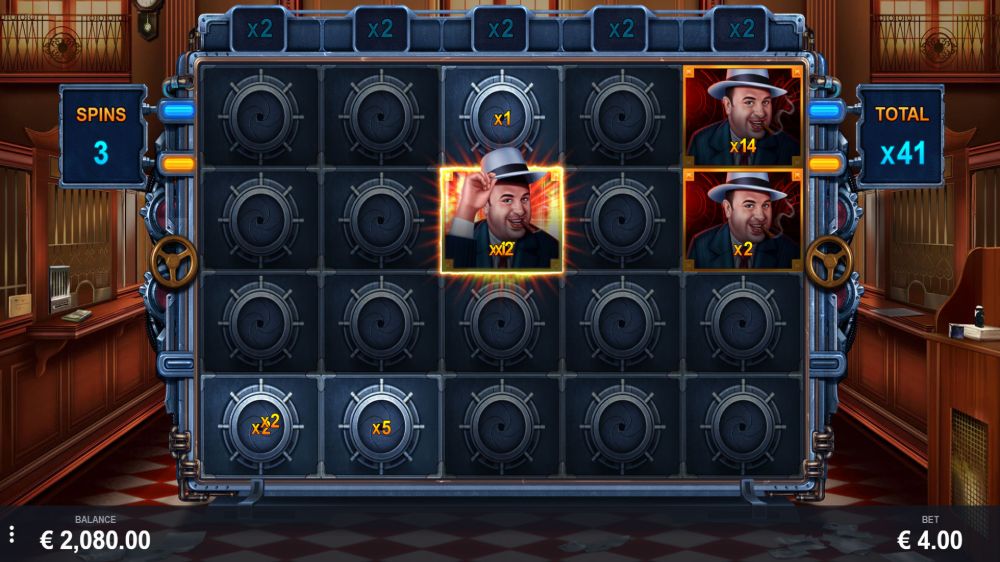 The hit frequency in the base game checks out since we receive a winner on every 5th spin. However, it can go up to 6 or 7 spins with no wins. We had plenty of wins in the region of 0.5x to 5x. It’s evident that the payouts are small in the base game; though we did manage a win of 29x our stake. We only played Grand Loot with real money for 100 spins. After our initial test run with real cash ended we played the free slots version.

The going was tough and we initiated the Grand Loot Bonus after 200 spins. The payout we received was $/£/€83. It’s evident that we played the game at a loss even with free credits. We understand because the top reward is huge and the big wins seldom pop. We have reason to believe that a payout of 200x comes after 300 to 400 spins. Our best advice to you is to play it with free credits first. 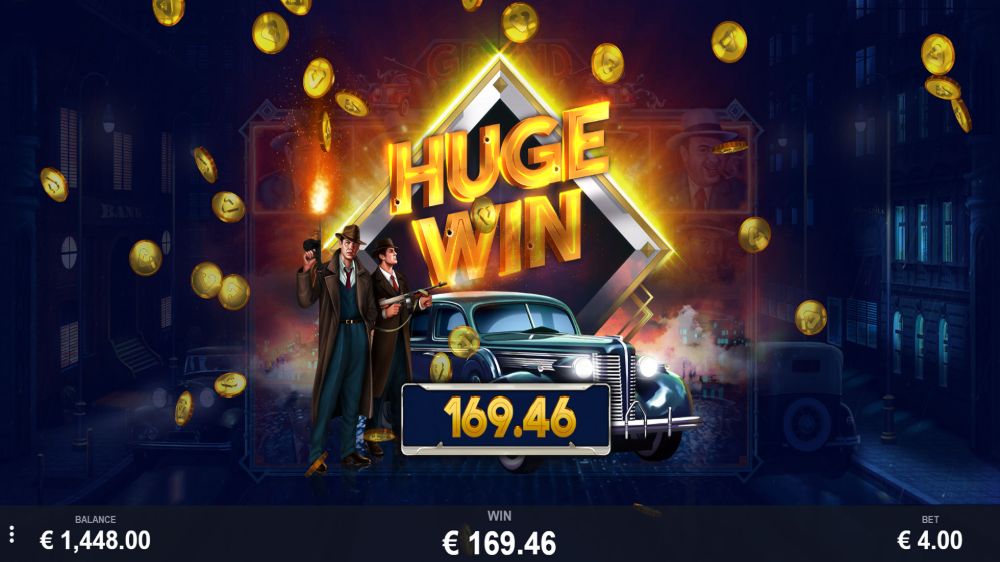 Grand Loot joins the ranks of other crime-themed slots since it’s all-out action on the reels. And, let’s not forget that it offers a jackpot of 50,000x. That’s what heists are all about, not so. Plenty of loot on the reels but they don’t come easy

In addition, it’s hard to trigger the slot’s only bonus round. When you finally do it leaves you hanging with a small payout, at least in our case. Only play it if you’re a high roller chasing the jackpot.

Then again there are better slots with bigger jackpots. If you’re in for a penny and in for a pound we highly recommend Microgaming’s Juice Joker Mega Moolah. It offers a massive jackpot of 1 million credits, 3x wilds, and a cracking hit frequency.