Gorilla 3D slots machine powered by Novomatic is set against the back drop of an African jungle. The game has 50 paylines and 5 reels. It features colourful birds, the gorilla, a golden African mask, flowers and card symbols from 9 to Ace. The slot game’s theme is about a Silverback gorilla in its natural environment. It so happens that it’s also the highest paying symbol in the game.

Gorillas are mainly ground dwelling herbivorous primates that’s divided into two species: Eastern and Western gorillas. They live in the tropical rain forests of Central Africa. A fully grown male can weigh up to 350 pounds. This slots reminds me of Gorillas In The Mist. Yes it’s an old film with Sigourney Weaver in the lead. She’s a conservationist trying to protect these magnificent animals from being slaughtered by humans.

Like most 3D slots machines Gorilla comes with a free spins bonus game, scatters and a wild icon. The house edge of the game is 3%. It offers a non-progressive jackpot payout of 2,5 million coins at the maximum bet per spin. At the lowest bet level the jackpot payout is 100,000 coins making this a lucrative game to low rollers. The slots is perfectly tailored for all iOS, Android mobile devices and desktops. If you want to get a handle on the game graphics and payouts I recommend that you play the game in the free mode. You’ll receive 500 credits.

The game’s sound track features various animal sounds such as birds, monkeys and crickets chirping. It’s not often the mighty Silverback gorilla invites you into his kingdom in pursuit of hidden treasures. 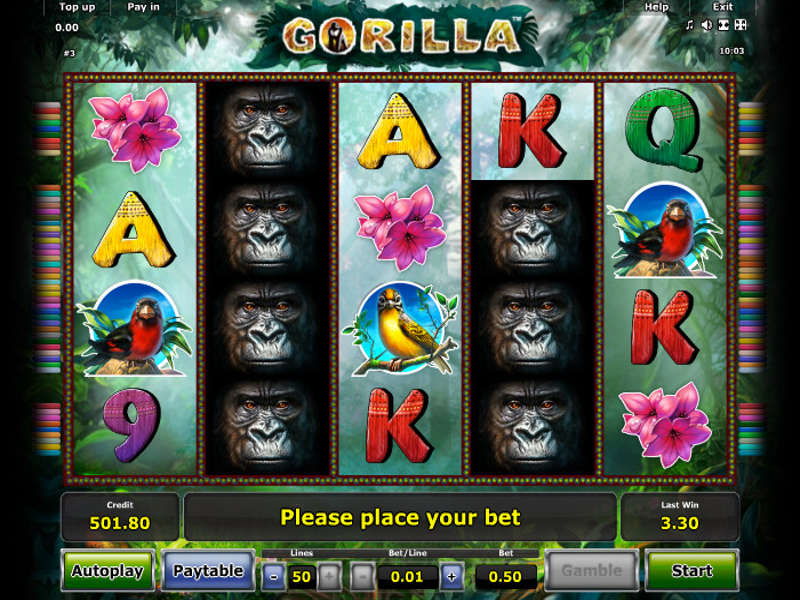 The game appeals to low, medium and high rollers. Bets could be made from $£0.50 up to $£50 per spin. Gorilla is one of the older Novomatic slots but I thoroughly enjoyed playing it. One can say it offers some form of escapism from the concrete jungle to one that’s teeming with wild life. If you play the game after dark switch off the lights and tune up the audio. The sound track is soothing and will teleport you to a land far far away.

The scatter icon is the African continent and the wild symbol is the Golden mask. The wild replaces all the other symbols on the reels except the scatter. When 5 gorilla symbols appear any place on the reels at the max. bet per spin it offers a payout of 50,000 coins. In descending order payouts are offered by the gorilla, birds, pink and orange flowers plus card symbols from 9 to Ace. During the base game at the maximum bet per spin (free mode) I managed a win of 820 coins for 7 gorilla symbols.

Free spins: Aside from the magnificent payouts during the main game the strength lies in its free spins. The free spins bonus game is triggered by 3 African continents (scatters). You’ll receive 10 free games. But the scatters must appear on reels 1, 2 and 3. Whilst the free spins is active an additional 5 free spins could be won when 3 or more scatter icons appear. Potentially you can win up to 15 free spins. Now, this is where the game become quite lucrative. When an additional wild appears in conjunction with a free spin be it on reels 2, 3, 4, or 5 you could win a huge amount of cash.

Gorilla in my opinion is akin to old wine the older it gets the more it pays out. Normally older slot machines fade away but this is one Novomatic slots that stood the test of time. It’s highly entertaining and flushed with a kaleidoscope of colourful characters. 15 Free spins can be won during the bonus game and you could win a staggering 1,220 your stake if you hit a wild with it. I must point out that the biggest wins occur during the free spins bonus round.