IGT’s Goldify is a Greek mythology themed video slot with 40 paylines and 5 reels. It can be played on desktop and mobile devices for free or for real cash. Base game wins are okay but once again it’s the free spins feature that enjoys centre stage, initially 15 free spins are awarded but up to 500 free spins can be won but more on it in a bit.

You’ve often heard the expression that he or she has that ‘Midas’ touch. The theme of the video slots is based on King Midas, in Greek mythology it’s believed that everything he touched turned into gold. To the right of your screen at the bottom corner there’s a ‘Goldify‘ button. It’s an interesting feature since you can ‘Goldify’ a symbol of your liking that increases its worth by up to 5x!

The game plays off in a temple with icons such as Pegasus, King Midas (wild), harps, amphora, apples, rings, Midas’ daughter, and helms on the reels. Five daughter symbols (ungoldified) pays 400 coins while 5 ‘Goldified’ Midas daughters at the maximum wager pays 2,000 coins in jackpot. It’s a medium to high variance slots with a return to player (RTP) percentage of 95.4%. 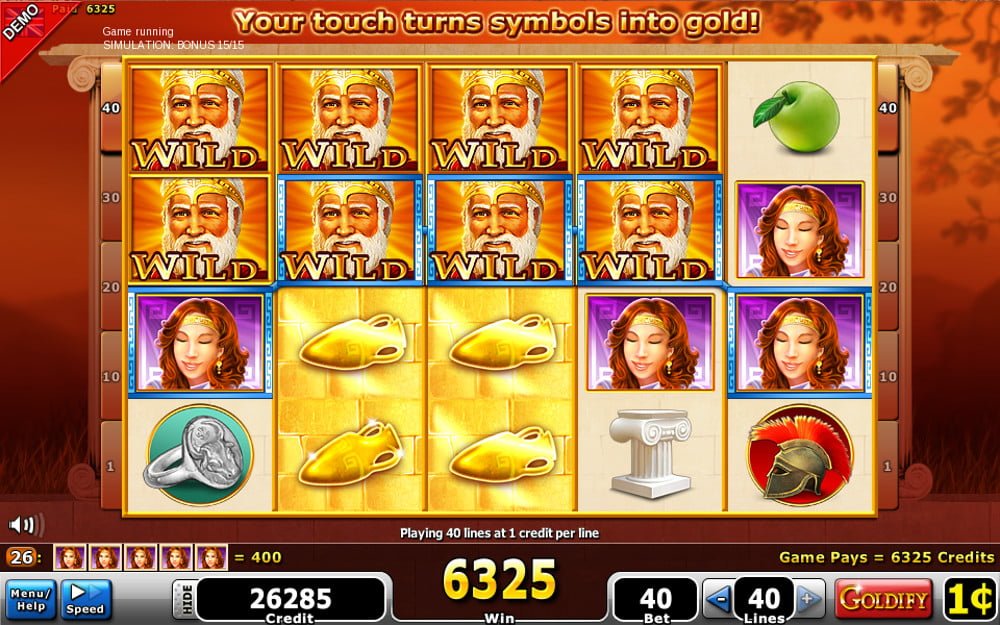 Bets can be made from 40 pence up to £1,200 per spin. At the lower end end of the spectrum (small bets) the slots pays out often but wins tend to be small. The biggest win I had during the main game was £30 when I hit 2 wilds in combination with 4 harps. The ‘Graphics Quality’ can be fine tuned starting with ‘Best Mode’, ‘High Mode’, ‘Medium Mode’ and ‘Low Mode’.

The wild symbol is King Midas when 5 of them pitch on the reels you can win up to 60x your stake. It substitutes all the other symbols on the reels except the scatter (golden rose)

The free spins feature is triggered by 3 or more golden rose scatter icons regardless of their position on the reels. Three of them awards you 15 free spins, 4 gives you 50 with 4x goldified symbols. If you land 5 of them you’ll win 100 free spins plus 5 goldified icons.

Although the free spins feature can be re-triggered a couple of times it only awards a maximum of 500 free spins. The trick of the game is to sprinkle your favourite symbols with gold dust, by doing so you can increase their value by up to 5x!

I played the game and to be honest it did not blow me away, here’s why. The visual side of the slots is above board but it’s the base game play that left me hanging. The wilds in combination with 3 or more symbols spices things up a bit but that’s as far as it goes for me.

Triggering the free spins is a beast in itself-it took me 230 spins to trigger it, instead of being excited on my accomplishment I felt pretty winded by then. That said, the biggest wins do occur here, you can win as much as 1,900x your stake on a single spin, but it requires a lot of patience and a hefty budget.