Golden Castle is a Fantasma Gaming/Relax Gaming medieval slot with a 6 Reel Titanways machine. By no means is it the standard playing grid we see so often. In fact, it comes with a slew of innovative streaks from 3×3 blocks to Free Spins with Multipliers. And, the developer throws in a special Avalanche treat. Therefore, players can catch successive wins from their original spin.

Moreover, when you play the slots for real money it offers you a jackpot of 20,000x your stake. Throw in the maximum wager of $60 per spin and it looks a lot rosier. However, the size of the jackpot indicates that Golden Castle is a high variance slot. To such an extent we rate it a 9/10 on the Whizz’s slots scale.

So, winning spins don’t come easy. If you’re a casual slots player you can take it easy at $0.20 per spin. Where can I play the slots online? You can play the casino games at any of our safe casinos online for Canadians.

It’s evident that Fantasma Gaming steps out of its comfort zone with Golden Castle. The ‘modern’ slot continues to bridge the gap between video games. In other words, not only do they look like video games; they play like them as well. 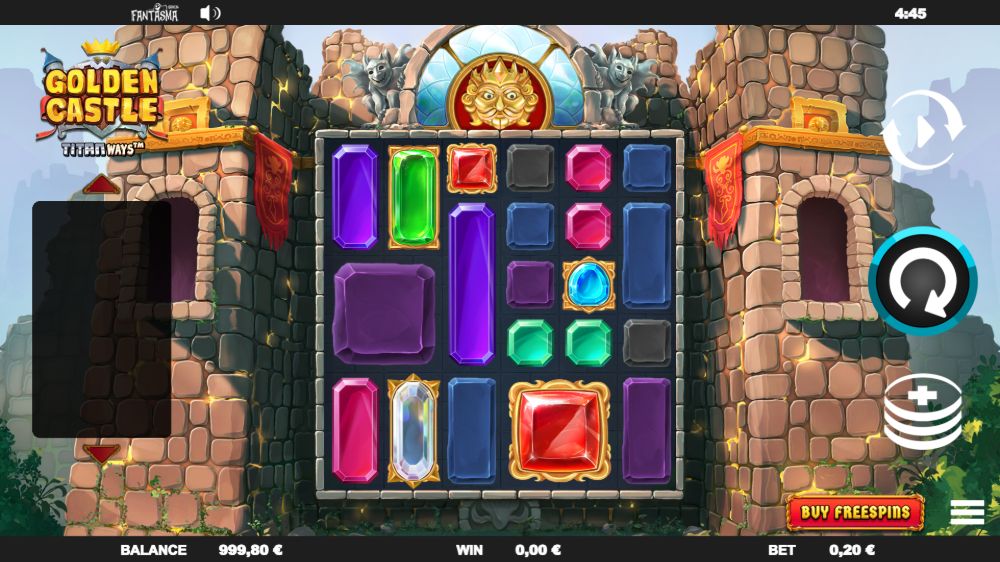 The RTP or payback rate is interesting because there are two. If you don’t use the Buy Option it’s 96.34%; use it and it shoots up to 97.12%. Basically, it’s a neat move on Fantasma Gaming’s part. They practically ‘compel’ players to use the feature buy option because the RTP is vastly higher. The hit frequency of 33.18% is just as good, you’re likely to catch a winner on every 3rd spin.

We like the visual arrangement of Golden Castle because it’s not over the top. Granted, it’s an explosion of colours and they enhance the medieval theme. A castle flanks the reels and you’ll see gargoyles along with the king at the top of the grid.

Players from the States can enjoy slot machines like Jungle Stripes at USA casinos like MYB Casino. They entice you to sign up with plenty of free spins and massive bonuses on your first deposit. 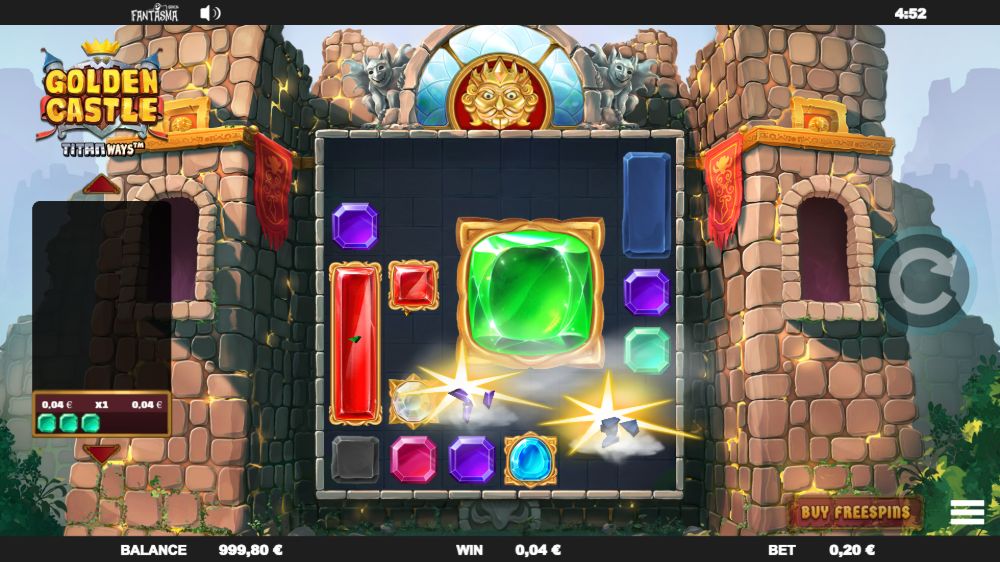 Golden Castle has two special features namely the Wild Haunt and Phantom Free Spins. In the next section of the slot review of Golden Castle, we discuss them in detail. According to Fantasma Gaming, an Epic Win of 100x plus your stake occurs on every 1,076 spins. While the big wins of 15x+ pitch on every 120th spin.

The Avalanche feature removes the winning symbols from the grid causing more symbols to drop in from above. We like it because you can snag plenty of wins on one go. If the symbols are smaller than 2×2 and 3×3 the game engine crushes the symbols.

Any medieval castle in Europe has an element of mystique to it. Folk always tell tall tales of headlines kings or chambermaids running around the ramparts on a full moon. Golden Castle is no different, the first bonus is the Wild Haunt feature. To initiate the feature you need the Ghost King on the reels. It transforms Colossal symbols into plenty of matching symbols. Now, the king upgrades the symbols into wilds as well.

The free spins feature is where we want to be because it plays host to the jackpot. In most cases at least. Before you can step into Golden Castle’s treasure vault; you need 3 bonus scatters on the reels. Moreover, they come bearing gifts in the form of 10 free spins.

As a result, the multiplier’s value can be really big in the free spins. Pretty neat, don’t you think? When another 3 bonus scatters pop they award an extra 10 free spins. The best part however is there’s an unlimited number of re-triggers. 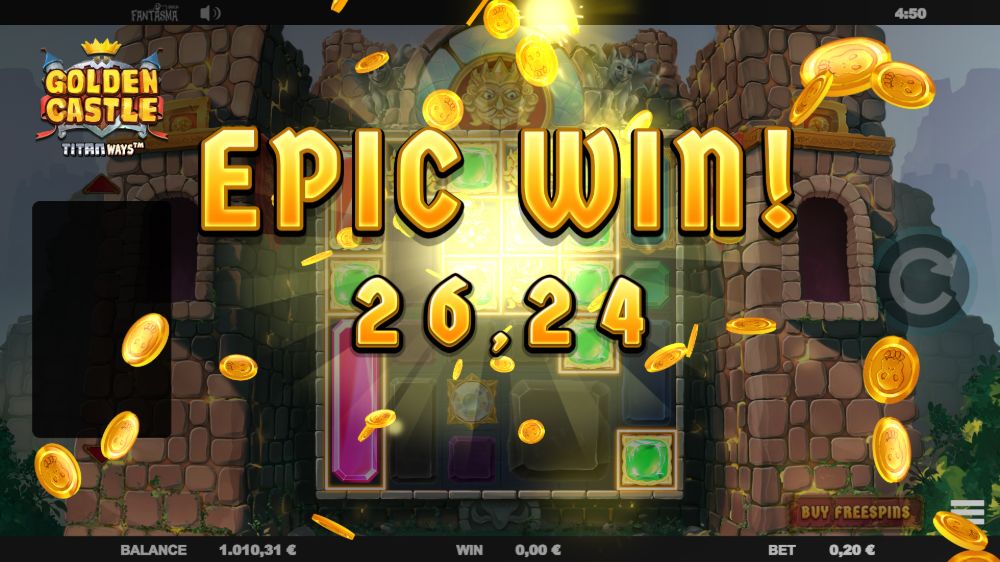 However, the Avalanche feature helps a lot in the base game, especially in the free spins. Furthermore, it increases the win multipliers by +1 on every cascade; the biggest multiplier we got was 7x for a payout of $450 after 10 free spins. Unfortunately, there were no free spin re-triggers for us.

Base game wins can come thick and fast if the King is in a good mood. Payouts hover from a few pennies up to 8x to 30x your stake for the big wins.

There are so many slots out there with a medieval and most of them sport the same mechanic. Not Fantasma Gaming’s Golden Castle. What separates it from the pack is its unique Titanways engine. Throw in the Avalanche feature; unlimited free spin re-triggers with big multipliers, and a whopper of 20,000x your stake. Golden Castle suddenly goes from court jester to King.

We like the Wild Haunt bonus because if you upgrade the wilds the base game pays can be big. If you’re into online slots with a game engine that shifts all the time, Golden Castle is worth it. Besides, you can crank up the RTP up to 97.12% via the feature buy. Remember, it’s not available in certain jurisdictions and it comes with a steep fee to trigger.

Templar Tumble also uses a Tumble mechanic, the jackpot is 17,000x, and free spins with Mystery Symbols await you.