RealTime Gaming released another cracking online progressive jackpot slots titled Gemtopia on the 16th August 2017. As the name of the game implies it’s a jewellery themed slots that can be played from a mere $0.10 per spin. It features 15 paylines, 5 reels a Major and Minor jackpot. We offers some valuable slot tips on this page: https://casinowhizz.com/site/maintain-winning-streak-slots/

As one would expect from a progressive jackpot of this nature the graphics aren’t as sharp since it mainly focuses on the payout side of things. Against the backdrop of the reels you’ll see an enchanting cave of sorts with paying symbols such as stalagmites, diamonds, different colored gems, a wild gem and a bonus bet gem on the reels. Apart from being a progressive it has a free spins feature that awards up to 15 free spins. Gemtopia comes with a RTP (average return to player percentage) of 95.5%. 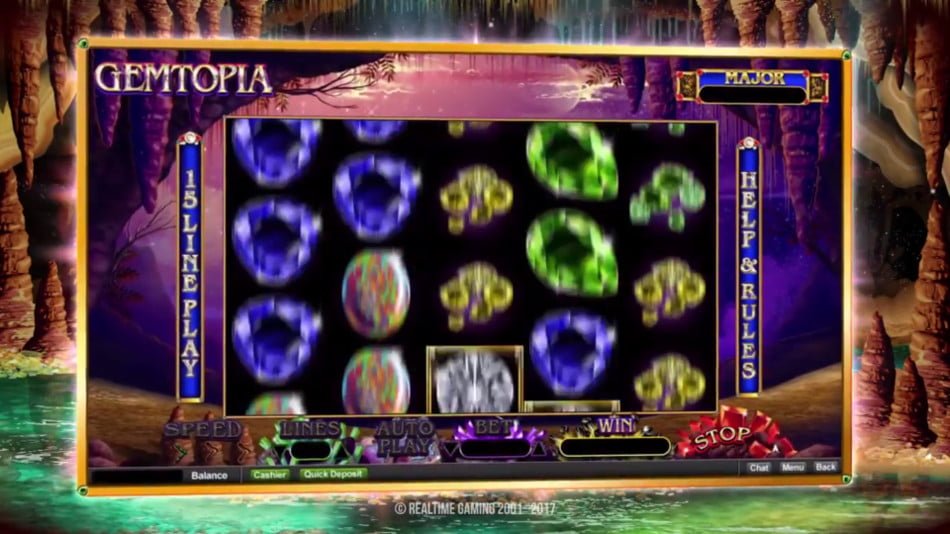 Players can wager 1 to 5 coins per line, make sure that all 20 paylines are activated when you play to gain the most out of it. A Max Bet button is there for the high rollers while an Auto Play feature spins the reels automatically for you while you make yourself a cuppa Joe.

The Major jackpot is seeded at $1,000 while the Minor jackpot pays $250. The jackpots can be won randomly after each spin.

The wild symbol is the Gem Wild, when it pitches on reels 2, 3 or 4 it replaces adjacent symbols bar the scatter and bonus symbols.

‘‘ TheWild Re-Spin Feature is played when an expanding wild gem lands on the reels. You’ll receive an instant re-spin where the expanded wild sticks to the reels. Any wilds accrued after the re-spin, will initiate yet another re-spin.”

The scatters are the Bonus Bet Gem and Free Games Diamond logo, wins are paid from left to right and vice versa. In the event the Wild Gem appears on the reels a re-spin along with an expanded wild will be awarded. Additional re-spins can be won as long as you keep on landing expanding Wild Gems.

”Gemtopia brings cutting-edge and engaging slot play to the table.”

Payouts are further boosted when the re-spins and expanding wilds combine. When 3 or more Free Spins icons appear on the reels (irrespective of position) the free spins feature is initiated awarding 15 free spins. Now, if 3 or Bonus Bet symbols pitch you get to pick gems which offers you an instant cash prize of around 1,000x your line bet. Keep in mind that the Bonus Bet Gems and Free Spins only pitch on reels 2, 3 and 4.

The fact that Gemtopia is laced with expanding wilds, wild re-spins and a free spins feature makes it a potential cash cow. A further feather in its cap it offers a Major and a Minor progressive jackpot too.