When Yggdrasil rolled out Fruitoids video slots I expected another run-of-the-mill fruity-game flushed with the usual plums, oranges, berries, cherries and lemons. The same old yada-yada so to speak. Thankfully this was not the case. I was caught off guard a bit since the slots has an underwater theme replete with futuristic-looking fruit symbols.

That said, it does away with the standard free spins bonus game and replaces it with a ‘Re-spin’ feature with multipliers of up to 5x attached to them. The Re-Spin offers something different and quite refreshing to boot. When three similar icons appear on an active payline they become frozen and a re-spin is awarded.

Fruitoids’ payout percentage (RTP) is 96.7%. Come to think of it this is really not bad. The game comes with 25 paylines, 5 reels and a maximum non-progressive jackpot payout of 500 coins. Overall the graphics are sharp, colourful and the game plays like a breeze on the latest smartphones and desktops. If you’re playing the slots on a dated mobile device it can appear jittery or freeze altogether. When this happens tone down the game’s graphic settings. 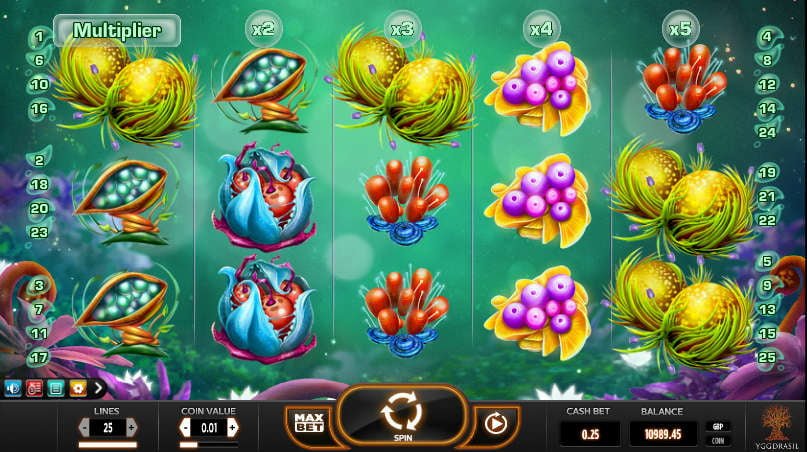 The average bet range starts off with a conservative £$0.25 up to robust £$50 per spin. Just a heads up. Although it’s a medium variance slots it can be a bit of a money chewer. Fruitoids is not stingy and pays out quite often even during the main game. The only reservation I have is that the main symbols pay out less than the other Yggdrasil slots. If you want to prolong your game play on this slots wager up to $£1 per spin. At this bet level the game is not as volatile and pays well during the re-spins feature.

Sticky Wins: The moment a winning icon pops up on the reels, they freeze awarding you a re-spin. This is a nifty little feature. When more of the same icon appears, they’ll keep on freezing by awarding you a free spins until they dry up.

Fruitoids is a no-frills slots that’s light and easy on the eye. It’s a medium variance game that won’t go through your bankroll like a coin-eating triffid (race of predatory plants). The fruit icons that feature on the reels are best described as strange but unique at the same time. The audio is quite catchy but becomes like an ear bug after prolonged game play. It would have been a rather dull game if not for the re-spins, multipliers and frozen symbols.