Fire Joker is another scorching video slots by acclaimed iGaming vendor Play N’ Go. With its 3×3 layout the game can be played on all mobile devices and desktops. The developer steered away from the usual 20 paylines. Instead this time round it incorporated a mere 5 paylines and 3 reels. The game has a few interesting bonus features such as the Flaming Re-spins and Wheel of Multipliers. I’ll discuss them in a bit.

The house edge of the Fire Joker is 4.4% and it pays out a total non-progressive jackpot of 5,000 coins. When I played the game for the first time I noted that the graphics and animations had that ‘old school look’. Don’t let Fire Joker’s simplistic look fool you since it focuses primarily on the bonus modes I’ve just mentioned. If you’re looking for a slots machine that’s graphic rich with loads of free spins this is not your game. Paying symbols that appear on the reels are grapes, bars, cherries, bells, Xs and sevens. 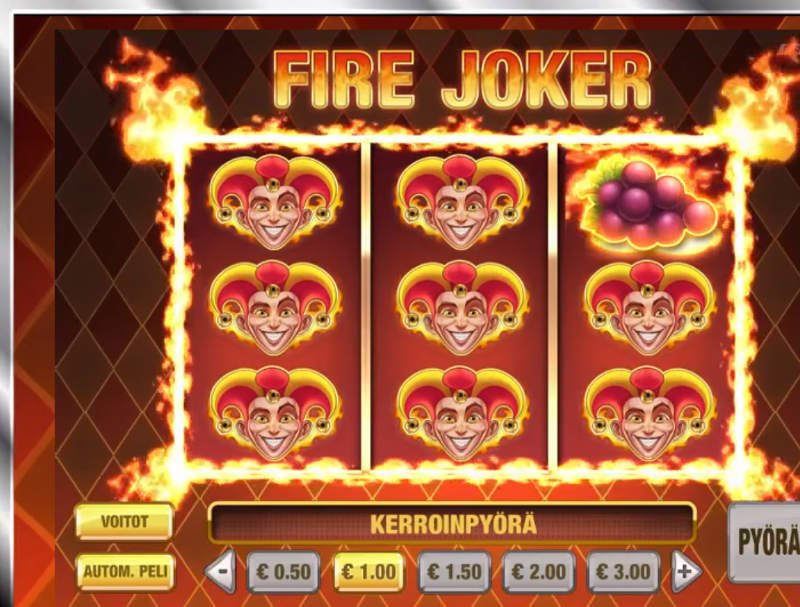 Just like its predecessors the coin range of Fire Joker is pretty extensive. Starting with a mere 0.05 up to 100.00. Low rollers can spin the reels at a minimum bet of £$0.5 and high rollers can give it a whack at £$100.

Wild: The icon that offers the highest payout is the devilish Fire Joker. When three of them appear on the reels you’ll receive a win of 80 coins. It also happens to be the wild and replaces all the other symbols adjacent to it when it appears on an active payline. So, keep a close eye on it.

Flaming Re-spin: When no winning combination is formed this feature is triggered when stacked symbols appear any place on the two reels. On the third reel you’ll receive one re-spin whilst the stacked icons remain locked on the reels.

Wheel of Multipliers: As the name implies this is where the big wins are at and the bonus game you should shoot for. When this symbol fills all the reels, the Wheel of Multipliers feature is triggered. The cash amount you’ve won will be multiplied by a random multiplier of up to ten times.

During the main game the Fire Joker (wild) offers the highest payouts with it’s Flaming Re-spin feature. Fire Joker is a medium to high variance slots so expect a lot of twists and turns. I still have mixed feelings about the game. One moment you’re up and the next moment you’re down. This is why I label it somewhere in the ‘middle’.

This is not the type of game that will make you rich neither will it blow you away on the fun scale. If you want to try it out the Wheel of Multipliers is your best shot. It offers the biggest win with a cash prize up to 800 times your stake. If you don’t play within the ambit of your budget this slots will go through your bankroll like green grass through a goose.

If you’re looking for games that offers loads of free spins, bigger jackpot payouts and scatters I recommend Tower Quest and Wild Blood.