Fire In The Hole xBomb Slot Review: Tips and Strategy

Fire In The Hole xBomb is one of the most original slot titles we’ve seen in 2021. And, guess what? The indomitable, Nolimit City is the slot studio that created it! We can’t compliment the developer’s previous release East Coast vs West Coast enough.

Moreover, it’s a 1990s hip-hop slot full of original tracks and an even livelier theme with in-your-face bonus rounds. The question is will Nolimit City rock the real money slots world again with this release? As online slots experts, we certainly think so. Unpacking the slot’s bonus features. It offers a Collapsing Mine, Wild Mining, Lucky Wagon Spins, and a Buy Feature. Bonus rounds are most definitely not in short supply here.

Here’s why. Fire In The Hole xBomb is no paper tiger. It’s meaner than the dwarves of Middle Earth in the Hobbit Trilogy. Furthermore, Nolimit City conjures up a reel structure of 486 ways to win, 6 reels, and 3 rows. Initially, the reel structure is not as robust as it appears. Hang onto your seat because the jackpot you’re playing is 60,000x your stake. The slots studio also showcases its new xBomb feature.

But, Nolimit City bobs and weaves like the proverbial champion boxer it is. It lays it down thick with a pulsating audio track and throws down a mining theme of note. Dwarves knotted with muscle make Arnie look like a Sunday school teacher.

They’re big, they’re mean and they mean business! So much so that Fire In The Hole xBomb clocks a scary 10’er on the Whizz’s volatile slots scale. If you up for the task of smashing rocks with the dwarves in the nether parts of the earth. You can spin the reels at our best casinos online for Canadians from $0.20 to $50 per spin. Therefore, if you’re playing at the max. You can potentially win an incredible $3 million! 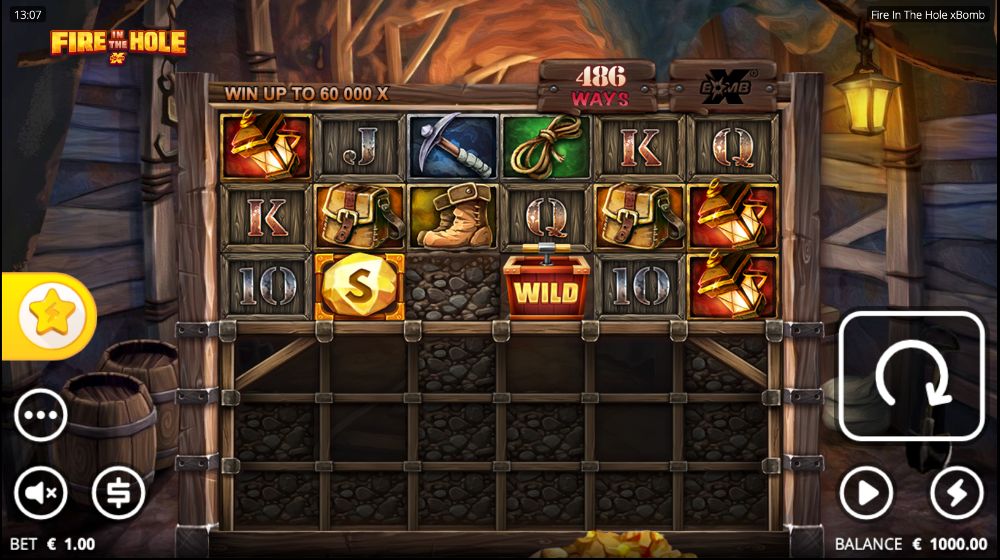 Now, most online slots experts will argue that the RTP of the slot differs from one casino to the next. We do agree, what’s important is that the base RTP is 96.06%. So, considering the size of the jackpot we think it’s pretty decent. The hit frequency comes in at 25% which means you’ll snag a winner on every 4th spin.

The symbols on the reels are cards from 9 to King. Our initial response was where’s the Ace? For reasons unbeknown to us Nolimit City thought it prudent to drop the Ace. The high-value symbols are ropes, boots, bags, lanterns, and pickaxes. The premium symbols offer payouts of up to 7.5x.

Big pity Fire In The Hole xBomb is not available to Aussie pokie players. It’s not the end of the slots world though. Players can still play best pokies like Easter Island 2 at our safe casinos online in Australia. 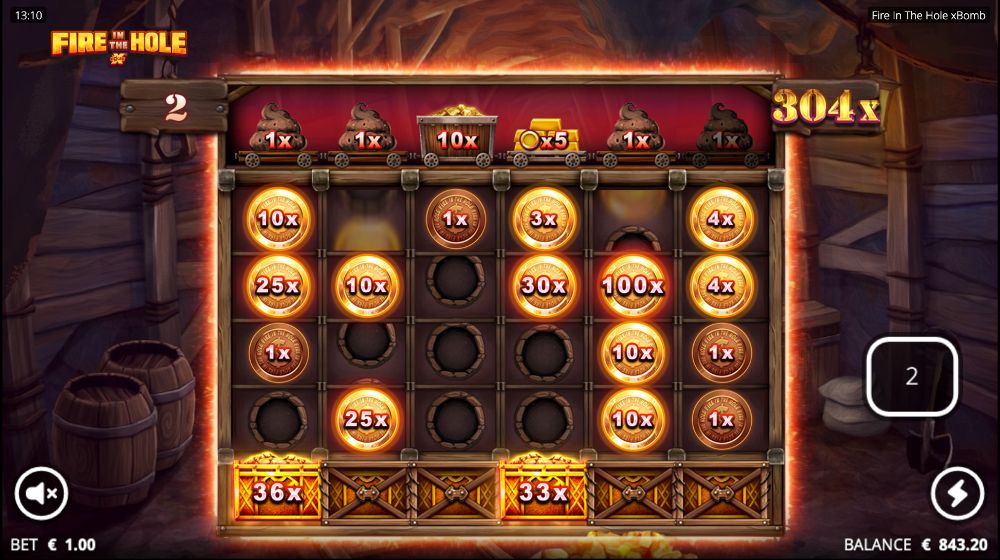 One word that comes to our feeble minds is Cascades. And, that’s exactly what the Collapsing Mine feature does. The Cascades System starts with 3 to 6 symbols of a kind. They explode and new symbols replace the old ones. As a result, chain wins become possible for even better payouts.

When the xBomb Wild explodes it triggers the Wild Mining bonus. The feature removes the winning symbols from the grid while the symbols drop towards the bottom-end of the reels. The best part however is if you can manage all 6 rows; you’ll catch the maximum of 46,656 ways to win!

When the xBomb wilds appear they do the usual sub duties by replacing symbols. They also juice up the multiplier by 1x on each collapse. On non-winning spins, the xBomb explodes too. On the condition, you don’t trigger the Wild Mining feature.

You’ll activate the Wild Mining feature when 3, 4, or 5 matching symbols pitch. However, they must appear on a horizontal line. Moreover, the feature does away with the wilds and throws them onto the middle section. The positions within the active area explode. The only symbols that don’t are the wilds and scatters, and they initiate a new collapse. It sounds complicated but once you start playing the game it’s straightforward.

There’s always a highlight reel in any slots. In the case of Fire In The Hole xBomb it’s the Lucky Wagon Spins feature. A new screen opens up with various starting rows which must correspond to the number of scatters.

For example, when 3, 4, or 5 scatters pop; you’ll nail 2, 3, or 4 starting rows. That’s the gist of it at least. Play commences with 3 spins and they reset to 3 when a coin symbol appears. At the top section of the reels, you’ll see 6 carriages. They offer Modifiers and cash prizes. Keep an eye on the coins because whenever they pitch they award the following: 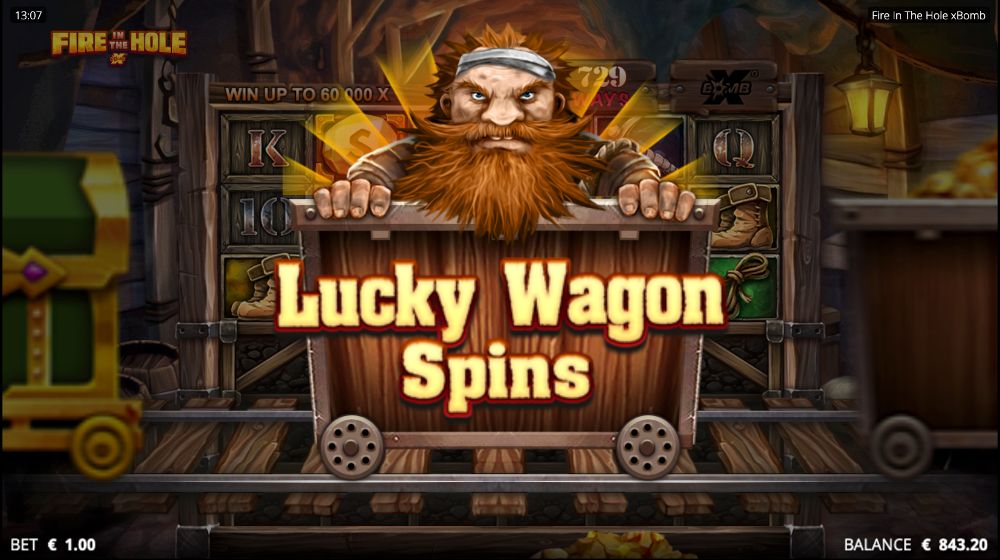 We played the slots for real money with a tiny bankroll of just $50. Our aim was to test the mechanic at an average bet of $2 per spin. We can assure you that the game won’t disappoint by way of its volatility. Armed with only 25 spins we managed three winning spins of which the biggest was 15x our stake. Which gave us a hit frequency of around 8%.

What this tells us is that it favours a progressive coin bet for the big wins. In other words, the more you wager the more you can win. Also, the more you stand to lose too. We strongly encourage you to play the free slots version before you drop real money.

NoLimit City has no intention of slowing down the pace. With insane releases like San Quentin xWays it’s fast becoming the proverbial “Slots Master”. The real money slot studio’s games are so busy they make a colony of ants appear lazy. Furthermore, Fire In The Hole xBomb most certainly appeals to the next generation of online slots players – the Millennials! We like the Wild Feature in the base game as it gives the game more punch.

We totally dig the fact that the bombs remove all the symbols from the reels and not only some. Therefore, everything about the slot is big! From its soundtrack to its in-game features to its graphical display. Not only does Nolimit City breathe new life into the mining theme. Those xNudge Wilds are meaner than the dwarves since they conjure up big multipliers.

To say the least, the jackpot of 60,000x makes it by far the game’s best attribute. Hit the 5x scatters on the reels in the Lucky Wagon Spins and the proverbial treasure trove is yours. Then again we think it’s easier catching a train to the moon than winning it. Because the game comes with a bruising math model that will knock any casino budget senseless. For what it’s worth the engine is quite similar to Relax Gaming’s, Money Train 2.