Finn’s Golden Tavern, which is brought to you by Net Entertainment, is the sequel to Finn and the Swirly Spin. Can we call this a video slot? Its visual styling and mechanic looks more like a Nintendo game. There are three random features such as Free Spins, Random Coin, and the Fist Slam feature. The latter bonus round gets triggered on a no-winning spin in the main game.

The same visual fidelity, spiral pattern, Cluster Pays, and Avalanche mechanic that appealed to so many players are back. Despite its technical marvels, the original slots fizzled out quickly. Some described the payouts as lackluster, gameplay as monotonous, and not to mention the small jackpot. If we have to make a prediction on the back of the previous game as to how this one would fare, we’re afraid it might also bomb out. Alas! It’s always best to give any NetEnt slots the benefit of the doubt.

With its 5 reels and 5 rows, the volatility of Finn’s Golden Tavern ranges from low to medium variance. Our friendly leprechaun Finn is back, and he rewards players who grind with a top cash prize (non-progressive jackpot) of 1,000x their stake. Finn’s Golden Tavern has an average return to player percentage (RTP) of 96.62%, and it plods along nicely with a hit frequency of 21.2%.

A table in Finn’s Tavern serves as the backdrop for the reels. Symbols such as star wilds, dice, candles, compasses, different beer mugs, gold coins, and the chest inspire a bright and cheery atmosphere. There’s even a star with an eye patch floating about. We can only assume that it had a couple of pints too many. The four different beer mugs are the premium symbols. When 5 of them pop up on a payline, you’ll hit a win of 5x your stake. Not much, but it is better than nothing. 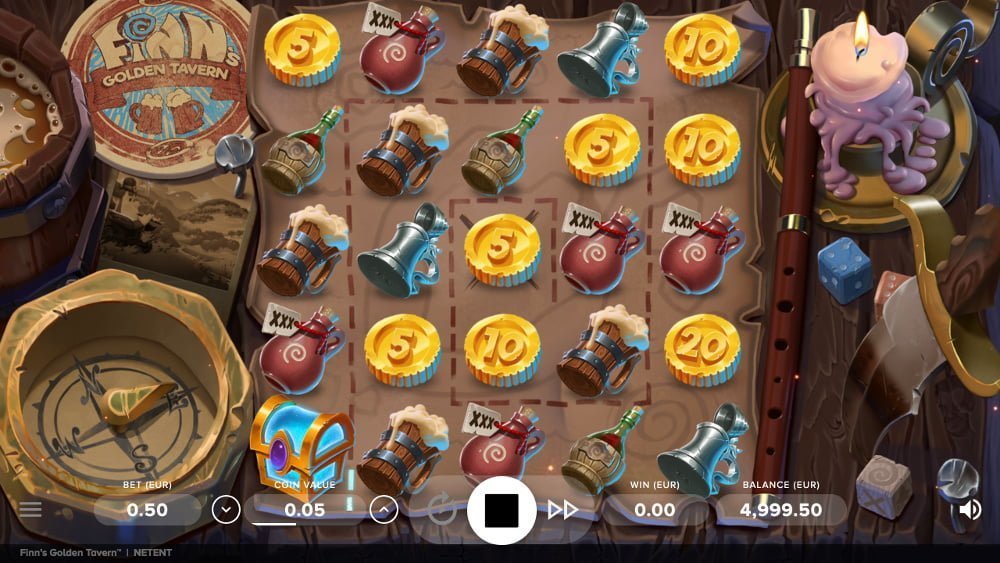 The star is the wild, which completes winning combinations when it substitutes adjacent symbols.

When the Free Spins treasure chest symbol pitches, it appears among a cluster of symbols on the centre reels. It transforms low-value symbols into coins, and the sum of their respective values will be your cash prize.

The Fist Slam feature is triggered on a non-winning spin in the base game. You’ll see Finn slamming his fist into the table, which offers you a winning spin or payout. In the base game, getting no winning combination can randomly trigger the Fist Slam feature. Finn slams down his fist onto the table/reel set and moves a coin symbol to give you a winning outcome.

Finn’s Golden Tavern has a free spins feature with an increasing multiplier that’s played the moment all the avalanches and payouts occurred. The free spins treasure chest must appear on the centre reels, and 5 free falls are awarded. Once the feature is activated, you’ll see a ‘Multiplier Meter’ situated to the left of the reel screen. For every wild that pops up, the multiplier meter increases by 1. The multiplier increases by 1 for every 5 levels you reach in the meter.

The Free Spins also benefits from the Coin Bonus feature. It’s initiated when the treasure chest symbol lands on the centre reels. Coin symbols, each with their own respective value, are added to the reels, and their combined total is the payout you’ll receive. 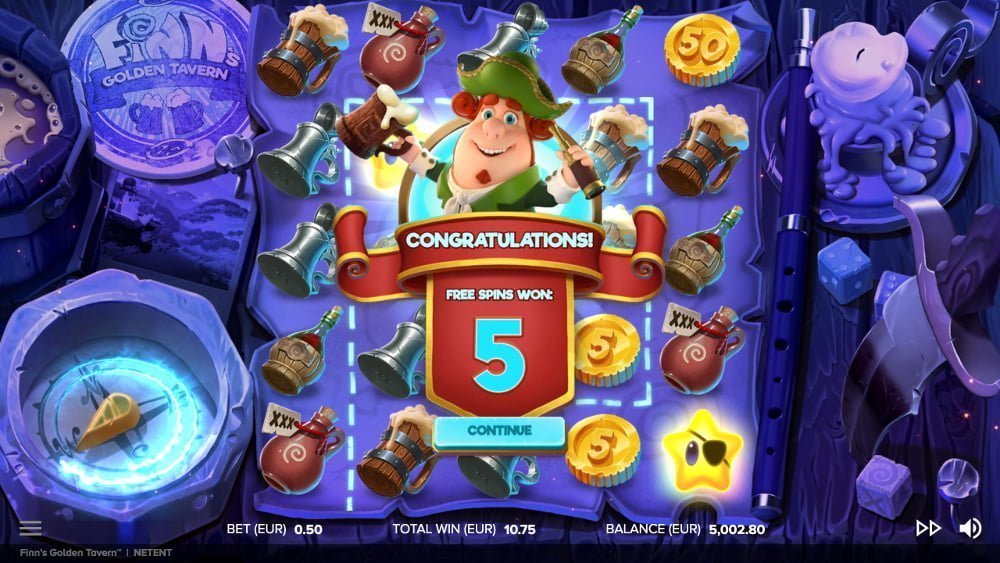 Finn’s Golden Tavern is as laid back as they come, and we don’t mean it disrespectfully. We do agree, however, that it’s better than its predecessor. This slots is so harried that it is challenging to keep tabs on everything. You will never be bored playing it!

To be perfectly honest, we don’t think it will appeal to the adrenaline slots junkies for the simple reason that its top winning potential is only 1,000x your stake. As far as Cascading Reels go, we’d like to go back to the drawing board and recommend Microgaming’s Jungle Jim and the Lost Sphinx.

What Is The Best Part About The Slots?

The striking visuals, Avalanche/Cascading Reel, and in-game bonus rounds score a 7 out of 10 from us. Unfortunately, the jackpot doesn’t relate to the aforementioned.