Finn and the Swirly Spin

Finn and the Swirly Spin is a 3D NetEnt slots played on a 5×5 grid with Cluster Pays. Surely this has to be one of the most vibrant and innovative slots releases we’ve seen this year.

With a kaleidoscope of interesting and colourful symbols it’s easy to see how the world’s premier casino games developer made this one pop. From as little as 10 pence per spin up to £100 the game can be played on PC desktops and mobile phones at the very best Netent Casinos. The top cash prize up for grabs is a non-progressive jackpot of 500 coins.

It’s an Irish themed slots that comes with unique avalanche reel feature known as the ‘Spin Mechanic’ which allows players to have consecutive wins. And it comes with 4 impressive free spins features that’s triggered by a number of scatter keys, but more on this in a bit.

Your journey starts with 4 randomly base game bonus modes which gives you a slew of wilds, symbol transformations, an avalanche feature that incorporates symbol destruction as well as wins that can be gained from a line of symbols. The interesting bit is that they also play a prominent role during the free spins.

”Players will be teleported to the Emerald Isle with a magical leprechaun that rewards you with a slew of bonus features on a 5×5 grid that’s fitted with 25 spaces where 25 symbols appear.”

Finn and the Swirly Spin whisks you away to a magical place replete with leprechauns there’s even one beneath the reels. Paying symbols across the reels are spades, acorns, rubies, hearts, 4-leaf clovers, scatters and star wild symbol. The symbol that pays the top cash prize is the ruby, hit 5 of them at the maximum bet and you’ll pocket a cool 50x your stake. The 3D slots offers the player an average return percentage (RTP) of 96.61%. 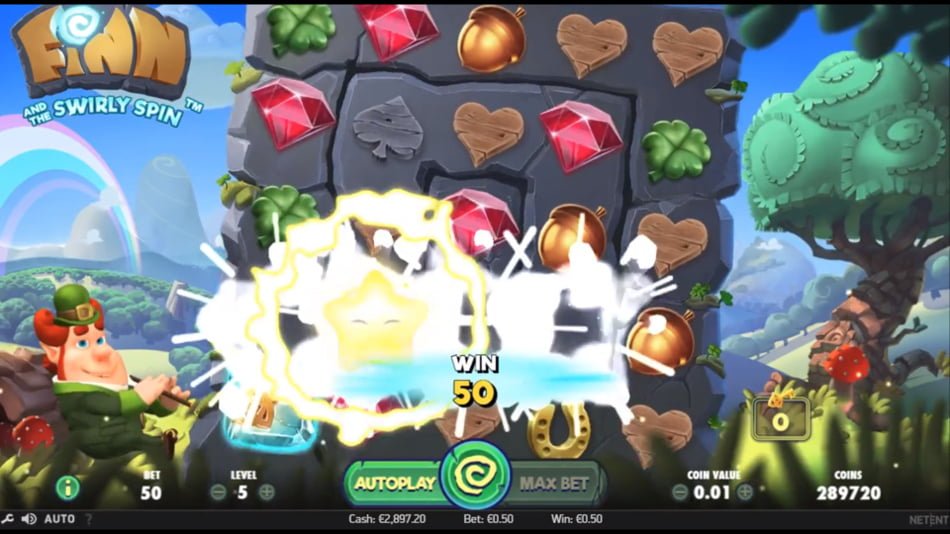 The Auto Play, Spin and Max Bet button are situated in close proximity to each other. Make sure you click on the right button, there have been cases where players clicked on the Max Bet instead of the Spin button. The coin size starts with £0.10 and shoots up to £100, with a range of controls are your disposal they can be adjusted easily to suit your bankroll.

The wild symbol is the star, it completes a winning combination when is replaces all the other symbols adjacent to it except the key scatter. Finn and the Swirly Spin employs a unique Spin Mechanic which is played out on a 5×5 grid that’s completely independent from one another.

Payouts occur on any of the vertical/horizontal lines when 3 or more symbols of the same kind pitch. Should a winning combo occur with the wild it explodes and will destroy adjacent symbols, wins can be gained again and again.

Contributing symbols are destroyed during a winning combination while the remainder of symbols fill the empty spaces (avalanches). When symbols from higher numbered spaces move to the lowest numbered spaces in accordance with the arrow, multiple wins can be gained from each spin.

This is the business end of the slots and for good reason. It contains 4 free spins features which is initiated when the locked key symbol appears in the center of the swirl on one spin. A specific amount of keys is required to trigger each free spins bonus mode:

This free spins feature is played when 1 key appears, 7 Star Bar free spins along with 2 to 5 wilds on a single free spin.

You need four keys to unlock this free spins feature, 3 Lava Lair free spins will be given, a random number of symbols will be destroyed on every free spin which gives you a payout and an avalanche. In addition in place of the key symbol a sticky wild appear.

To play this free spins feature requires 9 keys, 4 Lucky Mug free spins are awarded with a horizontal/vertical line of one type of symbol which gives you a guaranteed win on every free spin.

This free spins mode is unlocked with 16 keys, 2 Golden Pot free spins will be given, all spade and heart symbols will be transformed into higher value symbols on each free spin.

We salute NetEnt for coming up with such an innovative concept giving Finn and the Swirly Spin a unique place among slots. It’s of medium volatility and has the potential to offer some decent payouts especially during the free spins where you can win up to 500x your stake on a single spin.