The slot machine is based on the 1983 cult film of the same name, hard to believe that Jackie Chan only had a supporting role. The good news is that Realtime Gaming upgraded his character to one of the main symbols. Another nice feature about the game is that it shows actual footage from the film. In the graphic department RTG really stepped up to the plate with this one!

Fantasy Mission Force is a high variance RTG slots that can be played on PC desktops and mobile phones (Androids, iPads, iPhones, tablets) for free or for real cash.

The theme of the slots is about a group of misfits who must rescue 4 allied generals kept hostage in a fortress somewhere in Canada. There’s loads of blasting action with a lot of Kabooms starting with a ‘Dynamite’ free spins feature and if you trigger the jackpot you’ll walk away with the spoils to the tune of $5,000 (50,000x your line bet). Because it’s a progressive the RTP (return to player percentage) is 95.3%, payouts don’t occur often but when they do it’s generally good.

”Brace yourself for plenty of action, lots of shooting and explosions.”

Symbols on the reels are Lieutenant Don Wen, Lily (Femme Fatale), Billy (con artist), Sammy (Jackie Chan), knives, bombs, guns, grenades, cross, bows, maces and loads of other stuff. The slots is suitable to players with different budgets, it’s a case of in for a penny in for a pound- after all it is a progressive online slots. 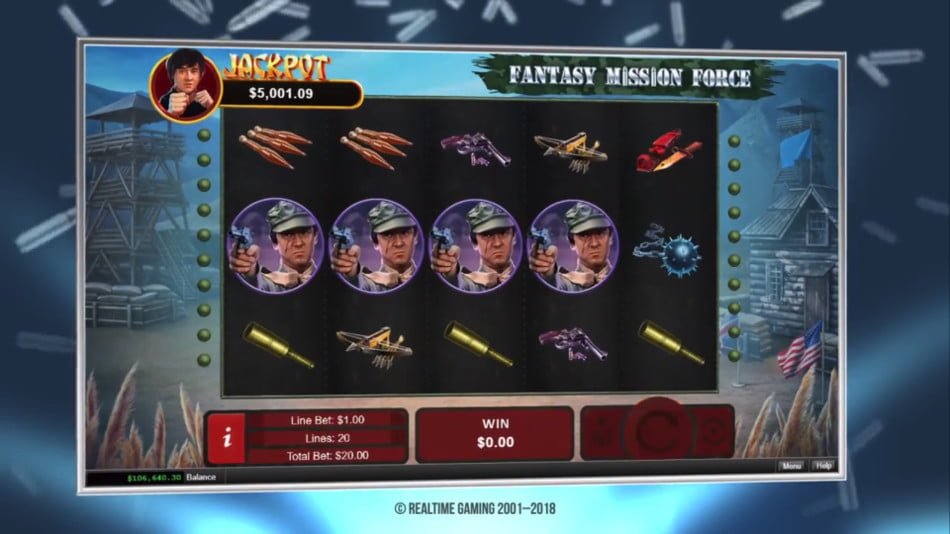 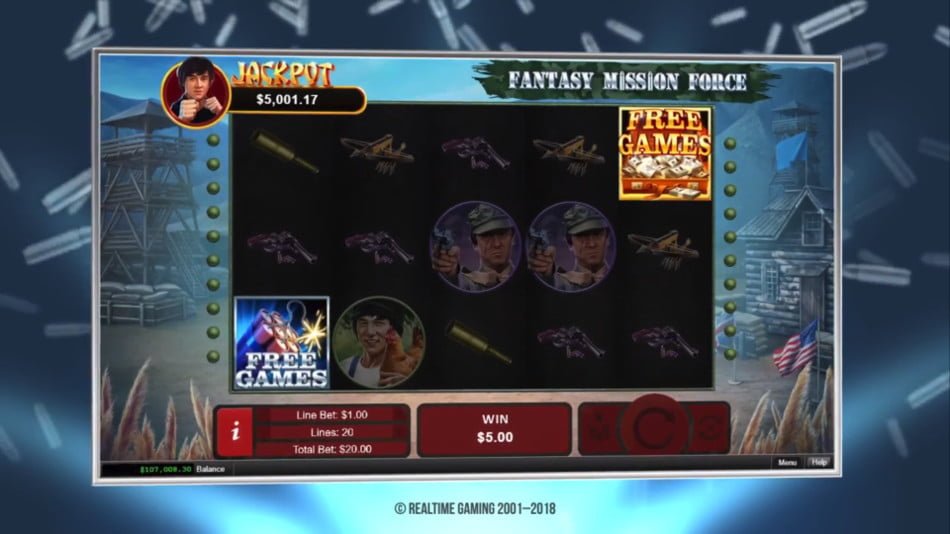 It’s best to play with all 20 paylines activated because you want to maximize the payouts you get. The coin size starts with $0.01 up to $20. The Auto Play feature spins the reels for you, so sit back and relax, let the game do all the hard work for you.

The wild symbol completes a winning combo (doubles all payouts) when it substitutes symbols adjacent to it bar the scatter icon.

The free spins bonus game is triggered in an odd way, because a unique combination of scatters and wilds are required. When the Dynamite scatter pops up on the first reel and the wild pitches on the fifth reel the feature is activated. For your trouble you’ll pocket 7 free spins with multiplier wins of 3x (all wins are tripled).

Now, should the wild appear during the free spins payouts shoot up by 6 times. There’s a Brickford Fuse which will be added to the symbols, it’s crucial for the Kaboom! When 3 or more Bickford Fuses pop up on the reels you’ll get 3 extra free spins making it a rather lucrative yet difficult to trigger free spins feature.

The progressive jackpot adds the ‘WOW’ factor to the game. During the main game it can be triggered randomly on every single spin, the top cash prize that can be won is $5,000.

Fantasy Mission Force is a live wire of a game just like our hero Jack Chan-it’s fast paced action all the way plus the free spins and progressive jackpot adds another dimension to it. Due to the high variance nature of the slots it’s difficult to trigger a bonus feature. It’s an entertaining slots with decent graphics but if you want to get into the good stuff a bankroll of $350 or more would suffice.