Fantasini Master of Mystery, NetEnt’s February 2016 3D video slots release is loosely based on Harry Houdini. If you’re not sure who Houdini was let me jog your memory. He was a Hungarian-American stunt performer, illusionist but most of all remembered as a sensational escape artist.

With 5 reels and 243 paylines, NetEnts latest installment is awash with captivating characters and audio sound that further compliments the game’s theme. It has an elegant magician in the form of a wild symbol but lacks the usual multipliers, scatters and a bonus round. To be honest Fantasini Master of Mystery won’t float everyone’s boat. the return to player (RTP) of this slot is 96.6%.

Symbols that appear across the reels are the magician, woman, golden handcuffs, crystal ball, cards with a dagger through them, locked chests and cards from 10 to Ace. 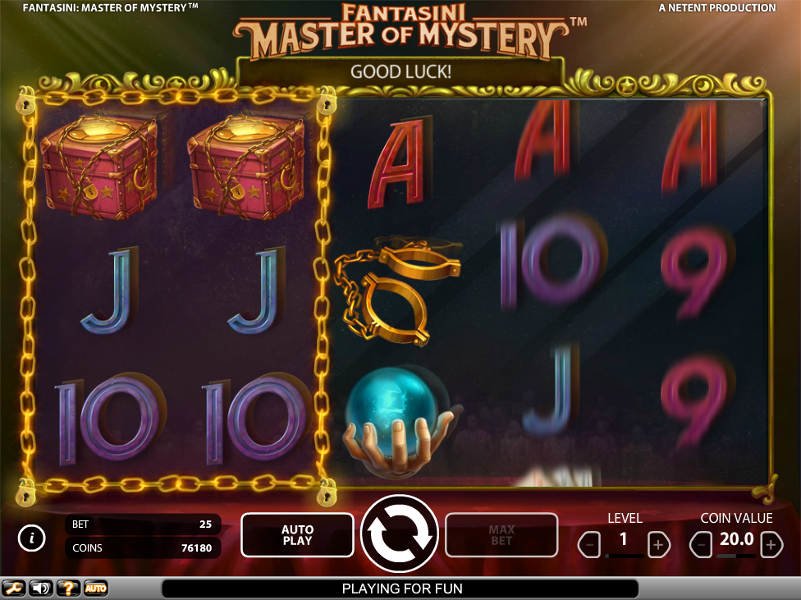 The 3D slots offers a total jackpot win of 270,000 coins. The coin value starts with $0.01 up to $0.50. The minimum coin bet per spin is $0.2 up to $125. The wild symbol comes in handy at times. During the base game multiple reels will display identical symbols. But here’s the catch, they’ll be locked together in chains.

When all 5 of them are locked together you’ll receive multiple 5 of a kind symbol wins instead of the 243 ways to win. You can win as much as 1,080 times your stake on every single spin. Fantasini Master of Mystery plays at a blistering pace but in a good kinda way. Just a pity it lacks the free spins feature we’ve become so accustomed to with the NetEnt games. I’d say in terms of variance it’s medium to high.

The wild symbol is the Harry Houdini look alike which substitutes all the other symbols across the reels.

Joint Reel Feature: Virtually on every spin 2 reels can be linked and cloned. By way of payouts 2 cloned reels don’t offer much, but when 3, 4 or 5 reels are cloned it pays out handsomely.

Overall the game mechanics of Fantasini Master of Mystery does not disappoint. I just feel NetEnt has produced better slots and couldn’t wait to get this one of the floor. The fact that it lacks a bonus round is a bit of a misnomer to me. Otherwise if you have a proclivity for slots with a mysterious theme then give it a go.