From a visual point of view the game hits all the high notes. One thing that strikes me is that the majority of the Play N’ Go games specifically target female slots players. Enchanted Meadow is no exception. I don’t think it will appeal to the boys as much as it will to the ladies. Then again its laced with a bunch of bonus features. So, boys don’t be afraid to venture into the magical forest with the ladies in search of hidden treasures.

The symbols and animations that feature on the reels are simply top draw. Look out for the gnarled old oak trees, fairies, card symbols, wilds, expanding wilds and free spins. The game exudes serenity. It comes with two distinct bonus rounds, scatters, a re-spins feature and a Hide and Seek Bonus game. The latter bonus game offers up to 50 free spins with a multiplier win of 5x.

Enchanted Meadow is a 15 payline, 5 reel video slots that offers a maximum non-progressive jackpot payout of 2,500 coins (5 Oak trees). The house edge is 3.75% which will give you a return to player (RTP) payout of 96.25%. The sound track compliments the game’s theme right down to a ‘T’. You’ll hear birds chirping and various animal sounds in the background. 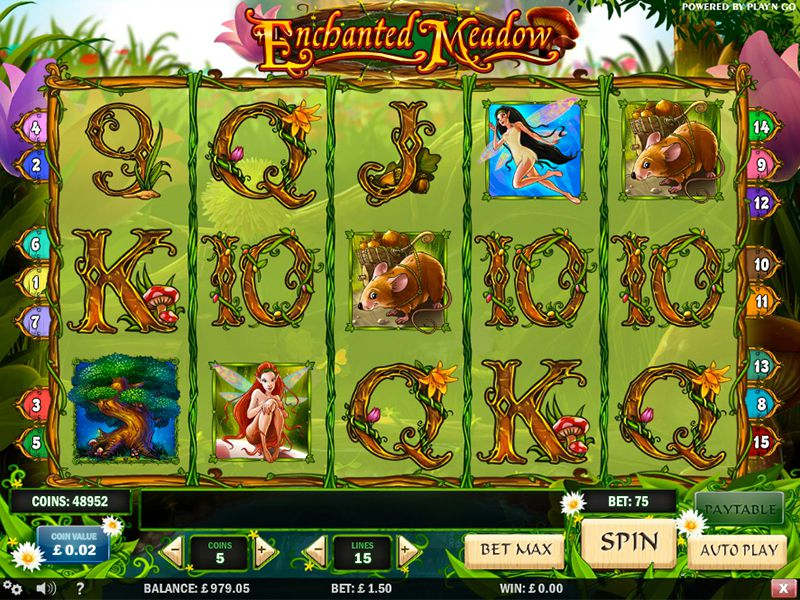 The game suits players with different bankrolls. From your stingy Sallies up to your big wig Wanda’s. The coin range is 0.01 up to 5.00. Low rollers can wager from as little as £$0.15 up to £$18.75 per spin. Let’s explore the meat and potatoes section of the game: the bonus rounds. This is where the fat cash is at.

Wild Symbol: It’s nice to see that the developers included a wild too. When the wild icon (Tree) appears on the reels it replaces all the other symbols adjacent to it except the scatters (tulip). If it lands on the third reel it expands and covers the entire reel offering additional wins.

Expanding Wilds: When the wild symbol pops up on the third reel in conjunction with the medallions on reels 2 and 4 it becomes an expanding wild. What I like about this feature is that it appears quite often and a guaranteed money earner. To add on to this. If you hit this combination you’ll get 5 re-spins but there are no multiplier wins attached to. Since the wilds remain static on the reels, they give the free spins a nice bite too. If the fairies sprinkle you with their magic fairy dust you can win up to 50 free spins.

Free Spins Combo and Bonus: When 3 or more lotus symbols appear any place on the reels the free spins bonus game is triggered. Initially it looks like just another bonus game but it’s not. Each flower hides a fairy: pick one and you’ll receive some coins for your trouble. If you chose a wasp; the bonus round ends and you’ll return to the base game. There’s a nice twist to this tale. If you hit multiple free games each comes with a multiplier win of 2x. When two or more fairy queens appear, the multiplier wins increases any win up to 5 times. Don’t bank on it but it is possible.

Gamble Game: After each win during the main game you get the chance to double or quadruple the cash you’ve won. If you pick the right colour your win will be doubled whilst the right suite quadruples it.

With an average return of more than 96% to the player, Enchanted Meadow is right up there with the best. It’s packed with bonus features and offers regular wins during the main game (re-spins with wilds) which keeps things ticking over. The bigger payouts occur during the free spins where you can win up to 50 times your stake.