A software developer that doesn’t always get the recognition it deserves is Realtime Gaming. Enchanted Garden 2 is hot of the press and the sequel to the much acclaimed Enchanted Garden. What can you expect from the slots machine? Technically speaking, Enchanted Garden 2 continues in the same vein as its predecessor. Only this time round the game mechanics are richer and more vibrant. It offers bankable bonus games and a total jackpot non-progressive payout of 15,000 coins.

With 25 payline and 5 reels the video slots is flushed with magical creatures and fairies. If you enjoy slots with fantasy themes then this one is a keeper. Paying icons that appear on the reels are flowery card symbols from 9 to Ace, fairies and gnomes. The reels are set against the backdrop of an enchanted forest. I played the game with a bankroll of $50 and I thoroughly enjoyed the ‘Firefly’ and ‘Fairy Queen’ bonus features. They come with a myriad of wilds and free spins. Based on my playing experience I’d say the average return to the player (RTP) is 96% but it can go as high as 97% if you can unlock the bonus modes. 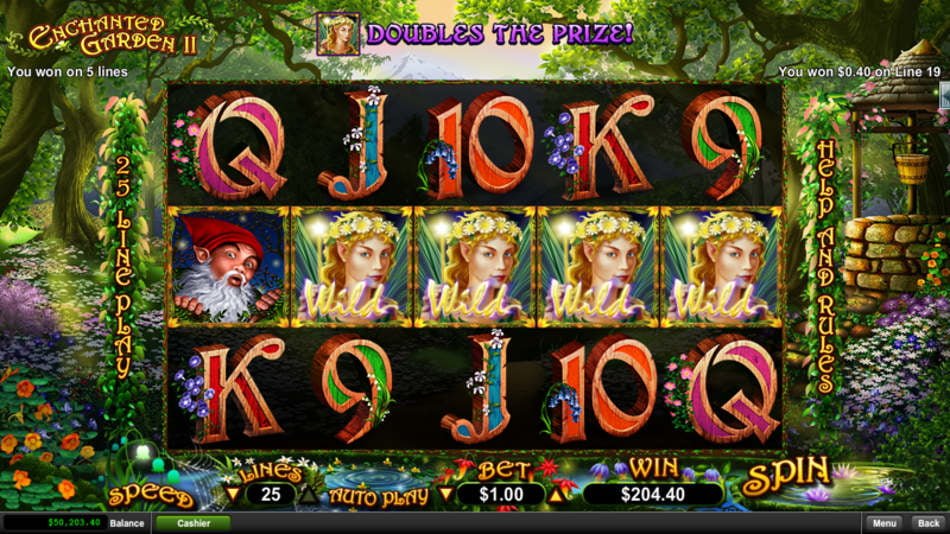 Before you venture off into the woods and start dancing with the fairies on the reels decide how much cash you want to wager per spin. The coin range is 0.01 up to 1.00. If you’re up for the challenge you can wager up to $5 per spin. My average bet per spin was $0.5 and I still managed to walk away with a profit of $20. You can spin and stop the reels as you see fit and a ‘Speed’ setting allows you to spin the reels faster or slower. Now that the formalities are out the way let’s explore the meat and potatoes of the game.

As mentioned previously Enchanted Garden 2 comes with two bonus games. When triggered the RTP significantly increases and at the same token spews out cash like a Sultan.

Wild: The scatter symbol is the ‘Enchanted Garden’ symbol and the wild is fairy princess. They compliment each other well and when the pop up on reel 1 one of the two bonus modes are triggered. You can pick either one of them. Just keep in mind that the Firefly mode awards 7 free spins and the Fairy Queen 10 free spins.

Firefly Feature: When the Firefly Feature is triggered you’ll receive seven free games. Once the free spins screen opens up you’ll notice the backdrop of the reels are flushed with firefly symbols. Now I understand why this is called the Firefly bonus. When 3 or more of firefly icons appear any where across the reels the 5 reels, you’ll get up to 3 free spins. Wins during the free spins mode are tripled but unfortunately the feature cannot be re-triggered. Once you’ve played your free spins you will return to the main game.

Fairy Queen Feature: The Fairy Queen Feature is virtually the same as the Firefly bonus mode. However, instead of awarded 7 free spins it awards 10 free spins. But it also has a nice treat installed. All wins receive a nice boost when the Fairy Princess Wilds appear on reels 2, 3, 4 and 5. The only downside is that this feature can’t be re-triggered. All wins are practically doubled.

Enchanted Garden 2 has a lot going for it. Taking into account the 2 bonus modes and the wild (Enchanted Garden icon) that’s thrown into the mix. Not wanting to sound cheesy here but I really had fun playing this slots. Yes I know I’m a guy and guys aren’t suppose to play games like this. At the end of the day as long as the slots pays who cares. When the wild appears in a winning combination it pays out regularly during the base game. This is well-balanced slots that pays out on average after every 5 spins.