Dwarfs Gone Wild is a medium to high variance video slot from Quickspin that has 20 paylines, 5 reels and pays a top non-progressive jackpot of 1,200 coins on a single spin.

The theme of the game is about Snow White and the 7 dwarfs. Dwarfs are forever searching for treasures, if you’re up for a bit of spinning action in this mad-capped adventure slots, this one won’t disappointed.

Let’s take a peek at the in-play slot bonus features. The first bonus mode is the Magic Mirror feature that awards 2 re-spins followed by the Golden Minecart free spins feature where Dwarf wins must be collected in the Golden Minecart Bonus Meter (75% filled). Furthermore, the slots is equipped with throwback wilds, spreading wilds, reels loaded with wilds, free wilds, throwback wilds and you can win more free spins with multipliers that shoot up to 5x!

Symbols on the reels are Snow White, the 7 dwarfs, the banker, strongman, wizard, diamond (scatter), huntsman, racer and low value cards from Q to Ace. The symbols that pay the top cash prize are the Dwarf Gone Wild logo (Wild) and Snow White, 5 of them at the maximum bet pays £60. Dwarfs Gone Wild has a theoretical average return to player percentage (RTP) of 96.38%. 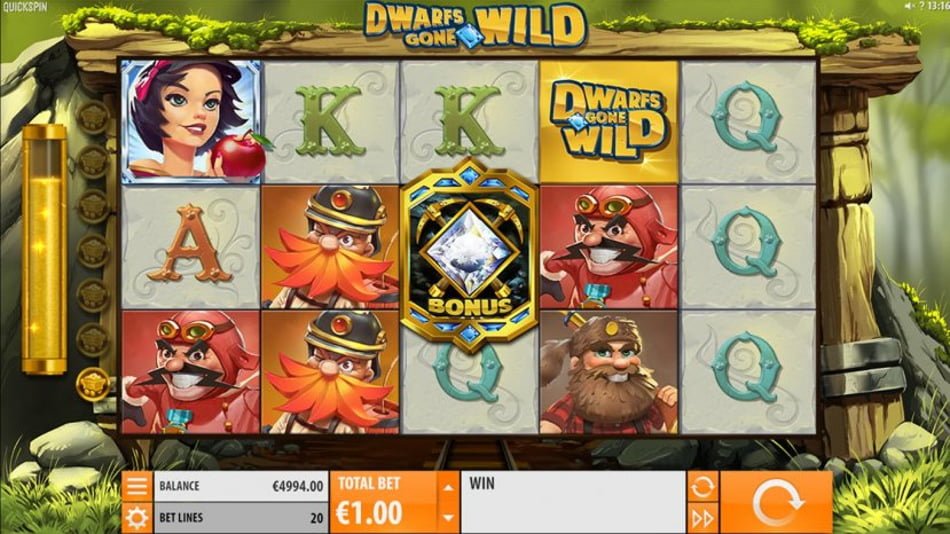 Dwarfs Gone Wild can be played on mobile devices (iOS, Androids, tablets) or PC desktops (Apple Mac, Windows) from £0.20 up to £100 per spin. Although it’s teeming with bonus rounds the volatility is high, we played it with a bankroll of £50 at an average bet of £1 per spin (50 spins). Base game wins are good and range from 5x up to 40x your stake. 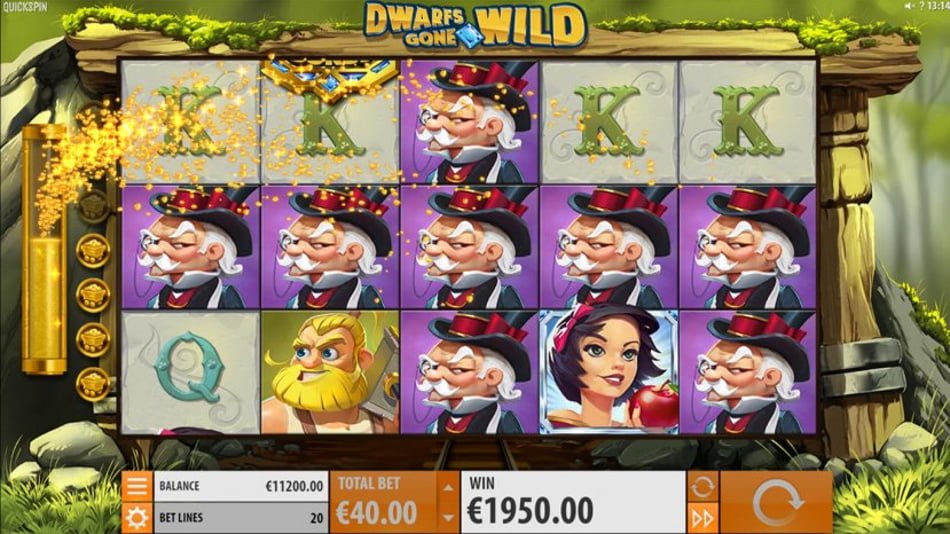 The wild symbol is the Dwarfs Gone Wild logo, winning combos are completed by it when it substitutes symbols adjacent to it except the scatter.

The Magic Mirror feature is triggered when the Magic Mirror appears any position on the third reel. An extra 300 Snow White symbols pop up plus you’ll get 2 re-spins.

Golden Minecart Free Spins
Of the in-play bonus rounds this one is the most lucrative. It’s played when the diamond scatter pitches on the centre reel (reel 3), 7 free spins is awarded. To the left of your screen there’s a ‘Golden Minecart Meter’, dwarf symbol are added to it until it’s full.

Verdict
Dwarfs Gone Wild is a cracking Quickspin slots, it has more bonus rounds than some dogs have fleas! The bonus modes pay okay but it’s the free spins feature with the Win Multiplier feature that carries the day. You can win as much as 2,535x your stake on a single free spin providing that the 5x multiplier is applied. Also, pay special attention to the Golden Minecart Meter because the key to the big wins lurk here.