Druids Dream is another classic Celtic themed video slot from the Swedish software developer Net Entertainment. It’s also the sequel to Secret of the Stones, which the real money slots provider released a few years ago. Structure wise it has 40 paylines, 5 reels, and 3 rows. So, there’s nothing out of the ordinary that jumps at us.

However, it’s a different story about its graphics, which is a visual showpiece! The vibe it creates is both enchanting and mysterious at the same time. Druids Dream offers a jackpot of 200x (£$80,000) your stake on a single Free Spin. When we unpack its in-game features, it has Free Spins, Stacked Wilds, and Sticky Stacked Wilds. You can spin the reels at our instant cash out mobile casinos from £$0.20 to £400 per spin.

An enchanted forest serves as the backdrop for the reel set with druidish symbols on them. Symbols on the reels are different coloured (blue, green, red, and yellow) ruin stones, an owl, white wolf, orange gourd on a rock, a bear’s footprint on a drum, and the male and female druid wilds (scatters). The premium symbol is the wild wolf when 5 of them pitch you’ll win 5x your stake. Druids Dream has an RTP or average return to player percentage of 96%. 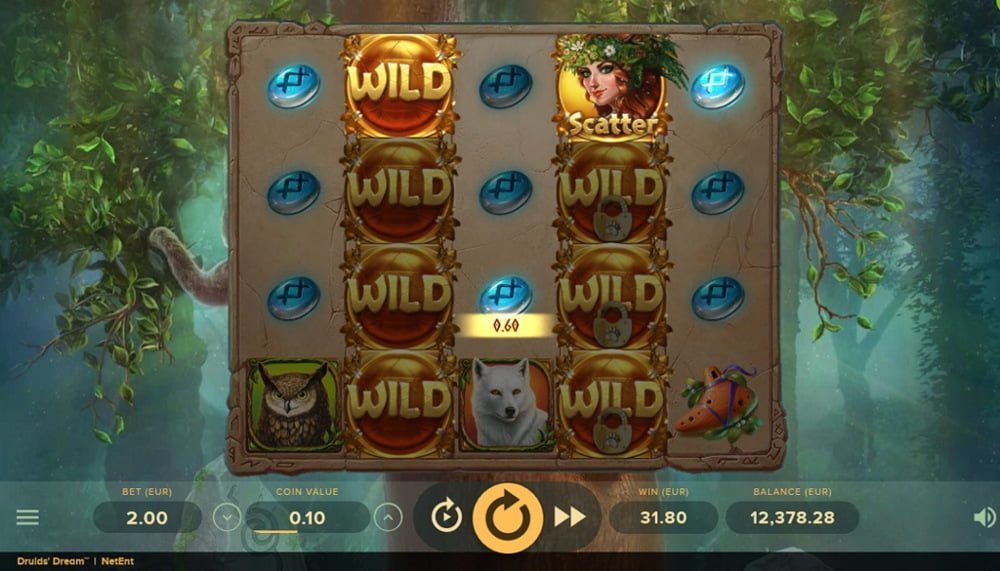 The number of wilds that appear in the charged stack is the number of re-spins you’ll receive. Furthermore, should another stack of wilds pop on reels 2 and 4, you’ll trigger the Nudge feature, which gives you a shot at landing an extra scatter. An extra free spin is awarded for every wild scatter that lands on reels 2 and 4. Furthermore, the wilds stick to the reels during the free spins for enhanced payouts. When the bear scatters appear in the Free Spins, you’ll gain an extra 3 Free Spins.

Druids Dream is sharper than Secrets of the Stones, and NetEnt did an excellent job with its in-game features. It’s engaging as it is breezy. The only thing that concerned us about the free slots online is its low jackpot of 200x your stake, and its RTP of 96% makes it more of a slog if you’re hunting wild scatters. Then again, it’s a low variance game with more than enough in it for the penny pinchers. We also suggest The Legend of Shangri-La, which has a similar visual fidelity and in-game features.

How do I win the jackpot?

First, you must trigger the Free Spins feature. To do this, the male and female scatter wilds must appear on reels 2 and 4. The number of free spins you’ll receive depends on how many scatters pitch. Another important feature about the scatter wilds is that they appear sticky during the Free Spins. If you hit a full screen of scatter wilds in the free spins, you’ll win the jackpot of £$80,000 (200x your stake).