As far as bonus rounds go there’s a re-triggerable free spins feature that awards up to 50 free spins and substituting wilds (dragon) that boost payline wins.

The game can be played from as little as 50 pence per spin on mobile phones and PC desktops plus it can be played in the free mode too. Novomatic is known for its medium too high variance variance slot titles-Dragon’s Deep fits the mold. The game offers an average theoretical return to player percentage (RTP) of 95.5%. You can play this slot at our Novomatic Software Powered Casinos for free or real money.

Paying symbols that appear on the reels are the mythical dragon which is the wild, 3 fierce-looking viking warriors (extra wilds during free spins), hammer and shield, cards from 9 to Ace, treasure chests while the dragon’s egg is the scatter. During the base game it pays out on every 5 to 6 spins but it also depends on your average stake per spin. The higher your bet per spin the more volatile the slots becomes but the cash prizes will be bigger too.

If you’re up for a bit of adventure you can team up with our 3 viking warriors who must enter the dragon’s cave in pursuit of riches. We must warn you though it’s not for the faint hearted but the rewards are good. The question is are you up for the task? 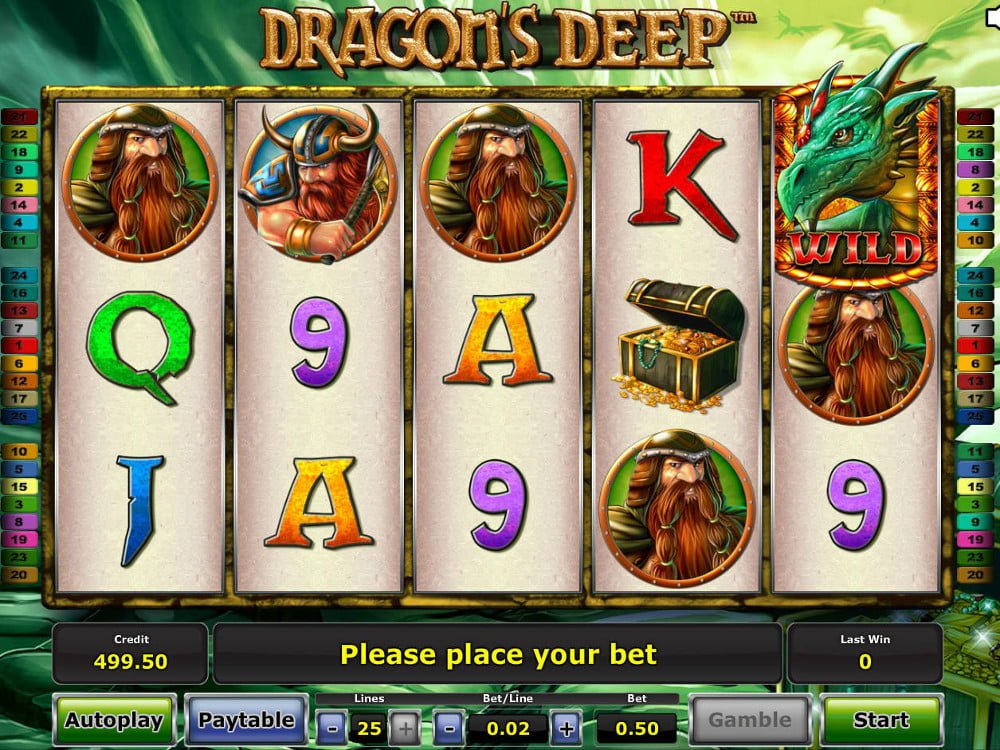 The game is suitable to medium and high rollers with a minimum bankroll of £200 because of its medium to high range range. The audio of the slots is great which kinda reminds of Game of Thrones, well sort of.

High staked players can use the Max Bet button and Auto Play features. The latter customization option spins the reels for you automatically up to 1,000 times. Low staked players can play the game on condition they receive free spins or a bonus from the online casino they’re playing at.

The wild symbol is the mythical dragon which completes a winning combination by substituting all the other symbols on the reels bar the scatter (dragon’s egg). It also pays a pretty penny, hit 5 of them on a payline and you’ll win 40x your stake.

This is the bank of the slots because the biggest payouts can be won here. The free spins mode is unlocked/triggered when 3, 4 or 5 scatter dragon egg symbols appear any position on the reels. Depending on the amount of scatters that pop you can win anything from 5x to 100x your line bet.

Once the free spins feature is initiated you’ll receive 5, 10 or 25 free spins depending on how many scatters that appear. There’s an interesting game mechanic at play here namely the 3 viking warriors-they transform into wilds which really boost payline wins.

Compared to other software providers’ games (NetEnt or Microgaming), Novomatic’s slots aren’t that sharp visually but we have to commend the developer with Dragon’s Deep.

With a decadent re-triggerable free spins feature that awards up to 50 free spins along with 4 wilds it’s really an enjoyable slots that pays well. You can win as much as 400x your stake on a single spin during the free spins. We’re suckers for fantasy themed slot games and firmly believe that this one won’t disappoint.