The playing grid is your classic Megaways fare. It showcases between 2 and 7 symbols on each spin. A bonus horizontal reel is present as well, with the top potential being 117,649 ways to win. Cascades occur on each winning combo. It works like this. The winning symbols either explode or the mechanic removes them from the reels. Moreover, new symbols replace the winning symbols.

The betting range targets the low rollers as it starts with £0.20 to £10 per spin. The math model is gritty so winning spins are hard to come by. The top payout of the slot machine for real cash is 10,000x of your bet. The action is highly volatile; you’ll need to get lucky, but it’s good that the potential is there. Albeit for penny pinchers.

Deal or No Deal Golden Box Megaways will find its home mainly at our best UK online casinos. We can recommend them to everyone thanks to their range of online slots, excellent promotions, and top-notch security protocols. 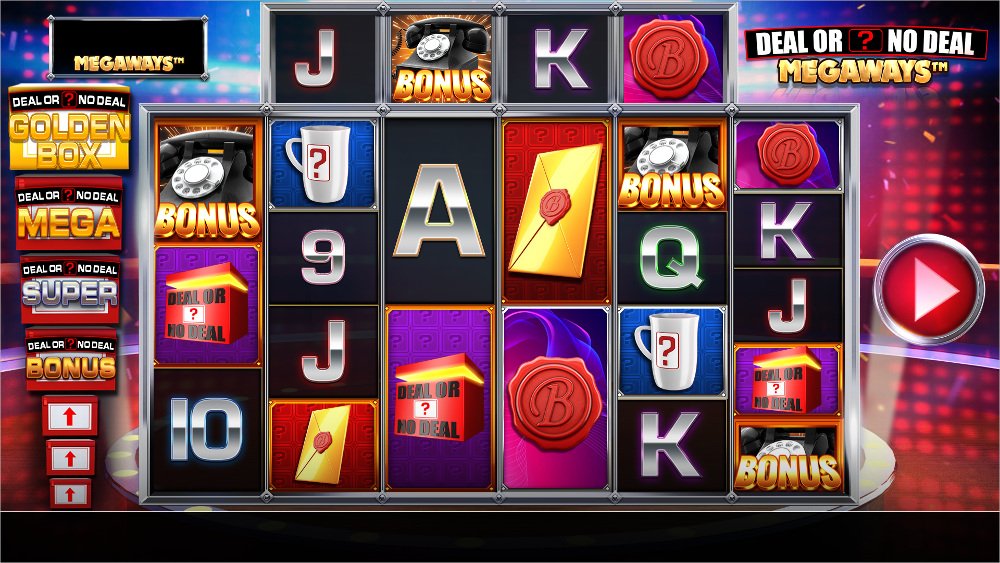 The RTP is disappointingly low at 95.34%. We’ve come to accept lower RTPs from certain developers, but 95.34% is bords on unacceptable. Deal or No Deal Golden Box Megaways draws its inspiration from the show of the same name; including the symbols, it comes with. As seasoned slots experts for real money online we anticipate the Hit Rate to be around 20%.

The low-value symbols are the classic card ranks from Nines to Aces. The high-value ones are cups, letters, and boxes. Wild symbols are present as well and they substitute the other symbols in winning combos.

The production values are average though. It’s clear that this has something to do with the outdated source material. Blueprint Gaming could’ve done a bit more with it in terms of the design. The symbols are clunky at times and so are the animations.

Players from the United States won’t find any joy with Deal or No Deal Gold Box Megaways. The reason being it’s not available at our top USA casinos online sites. If you don’t know which casino slot games are available to you we recommend RealTime Gaming’s Frog Fortunes slot. Although the online slot does not page homepage to a Television show. The Asian theme, special features, and jackpot of 150x is suitably perfect for low rollers. 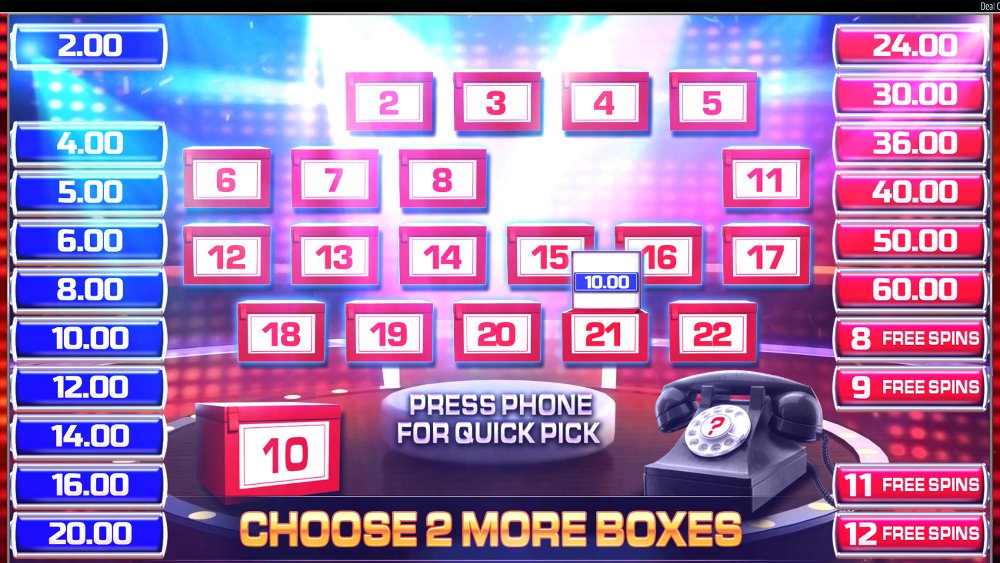 Aside from Wilds, there are Mystery symbols that can land anywhere on the reels at any point in the game. When they do, they all open up to reveal matching symbols, boosting your winning chances in the process.

The central feature of Deal or No Deal Golden Box Megaways is its Bonus Trail. You’ll initiate the feature when you snag consecutive Cascades.

Getting 4-6 Cascades leads to a minigame that mimics the original Deal or No Deal show. You can keep on opening boxes or accept various offers from the banker. It’s up to you and the excitement keeps increasing for as long as you keep on removing the lesser rewards.

Getting 7 or more Cascades in a row leads to the Deal or No Deal Golden Box Feature. Here you have to open boxes and win up to 30 free spins. Once you triggered the Free Spins feature. You’ll get a huge number of Mystery symbols and a progressive win multiplier.

The multiplier starts at 1x and on each Cascade it increases by +1. There’s no limit to how high the multipliers can go. You can get to the top 10,000x win, however, you must boost the win multiplier early on.

Deal or No Deal Golden Box Megaways is a niche slots. Therefore, we believe it will only rope in fans of the TV series. The Deal or No Deal franchise was tremendously popular some time ago, but that era has now passed. Some players will surely enjoy that bit of nostalgia, but the momentum for a big hit isn’t there.

We like how Deal or No Deal Golden Box Megaways handles its source material. Not mention the max win of 10,000x. During the special features, you’ll experience the same emotions and excitement as the Deal or No Deal contestants.

The base game isn’t that much fun as the pays are small. Plus the RTP of 95.34% does not help either. Deal or No Deal Golden Box Megaways is a must-play for Deal or No Deal fans. Since Megaways slot games are in vogue at the moment. Have a look at Stakelogic’s Candyways Bonanza Megaways slot. It pays as much as £200,000 on a single spin. Furthermore, it sweetens play with Cascades, Free Spins, and a Bonus Buy Option.

legacy Of The Gods Megaways