Dead Man’s Finger is a Yggdrasil and G Games video slot with 5 reels, 4 rows, and 40 paylines. The independent G Games took up the gauntlet.

What we have here is an online slot with a pirate theme. Arr me maties are you’re ready to jack some plunder on the high seas?

The hit frequency of Dead Man’s Finger is only 17.69%. Technically speaking, real money slots players will catch a winner on every 5th spin.

Not generous, but the medium to high volatility isn’t that difficult. The top jackpot is disappointingly low at 2,740x, however.

That’s nothing to write home about for sure. You can play for stakes between $0.25 and $100, across our top mobile European casinos online.

US players can play Twister Wilds at the best real money online casinos in the USA. 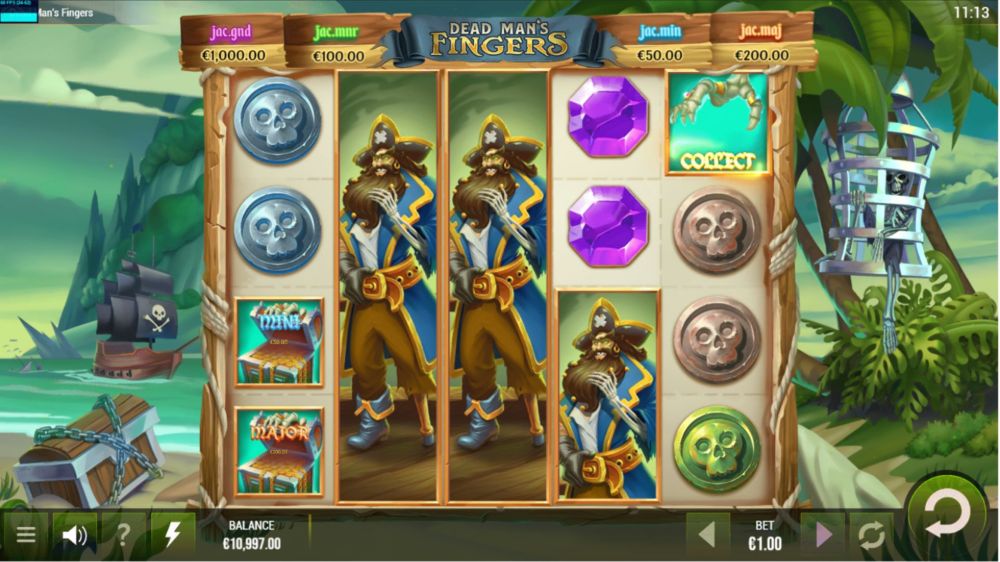 The RTP of Dead Man’s Fingers is 95.2%. That’s almost a full one percent below the industry average of 96%.

The symbols are better, on the other hand. The designers made sure that everything looks slick and what’s on offer is a classy eye-catching game.

The low-value symbol depicts skull coins, while the high pays are all about precious gems. They are worth up to 32x your bet for a full line. Even better are the pirate symbols.

They pay even in a set of two, appear stacked, and can pay you up to 80x your stake.

That’s for a full line of those symbols. Octopus Wilds can show up, too. These sub for adjacent symbols, but they appear only on the middle three reels.

The Quickhit Money Symbols can land anywhere on the board at any point. They have cash values from 1x to 20x, but they also carry 4 jackpots.

Get 3 Compass Scatters and you’ll trigger the Free Spins Feature. You’ll receive 10 free spins in total, plus one neat bit.

Moreover, you can retrigger extra free spins when 3 extra Compass Scatters pop onto the grid. 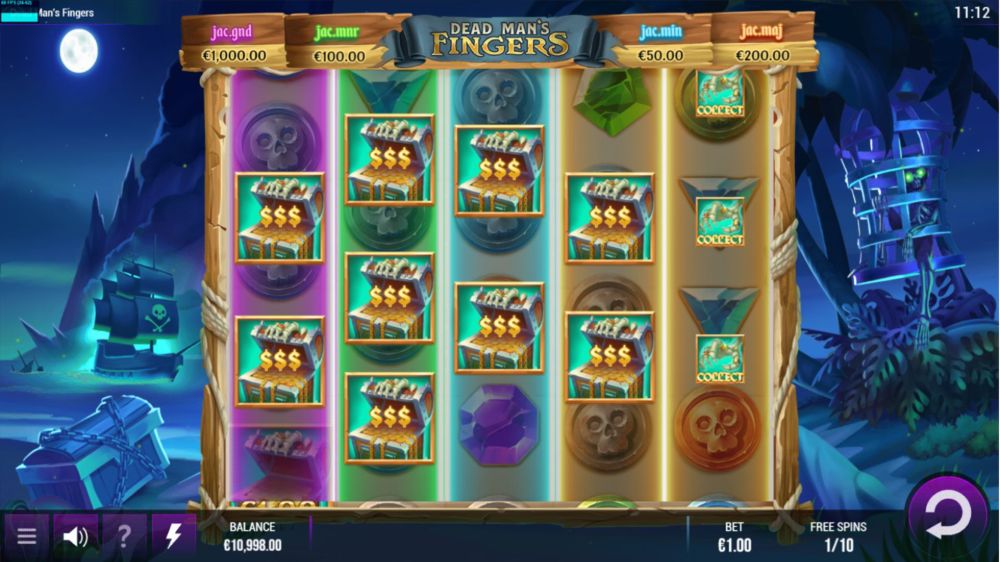 We played Dead Man’s Fingers for 200 spins, give or take. We had enough fun with it, but the math model won’t deliver in the long term.

That’s what you need to have in mind when playing, that there are better-paying slots out there.

The gameplay is good on its own, with Quickhit symbols allowing for some quick hits.

They occur often enough, though you won’t like missing out on Collect symbols.

We didn’t hit the free spins during our testing, but that’s how these medium-high volatility slots sometimes roll.

Especially when they have another bonus round in store. No Bonus Buy options, which is a tad disappointing though.

Dead Man’s Fingers is a decent pirate slot that’s also a dead hard sell. That’s because this Yggdrasil slot has to compete with a lot of other games in that niche.

Dead Man’s Fingers doesn’t stand out in any big way, either. It has a low jackpot and an under-performing math model with a low RTP.

To its credit, though, it’s not that hard to score some bigger wins with the Quickhit symbols. Just find a couple, get the Collect symbol and you’ll be on your way to a nice paycheck.

Especially if you get one of the jackpot symbols.

As an alternative, we’re happy to recommend Solar Nova from Iron Dog Studio. It’s a space-themed slot with a huge 9×9 grid that banks on Cluster Pays.

It has a good 10,000x jackpot to get your interest, plus a wide range of bonus rounds.

Just to give you an idea, you can look forward to Cascades, Rocket Wilds, Solar Flare, and even Free Spins. All that while playing for stakes between $0.10 and $50.

That makes the top payout $500,000, which is pretty okay. If you like exploring space, Solar Nova should pique your interest!