Das xBoot is a Nolimit City video slot with a submarine theme. Even though underwater or ocean-themed slots are a dime a dozen. There is something spectacularly unique about Nolimit City’s, Das xBoot. This submarine is not here for the cake and tea, so to speak of course. Instead, it’s a war submarine with plenty of torpedoes!

With Das xBoot Nolimit City explores the ocean’s depth in search of prey. In other words, to sink enemy ships. Now, the reel configuration has 6 reels and a 2-3-4-4-3-2 setup. That translates to 576 ways to win.

For bonus rounds, there are xNudge Wilds, xWays, xBomb Win Multipliers, Free Spins, and Bonus Buy. The math model is high-risk high reward. The max win is massive at 55,200x and you’ll get to it once per 65 million spins on average. The hit rate in the base game is 22.07%.

That means you can expect a payout on every 4.5 spins. This can be harsh, so keep your bets lower. Once you’re ready to play the slots for real money at the best Canadian casinos online. You can risk between $0.20 and $100 per spin. 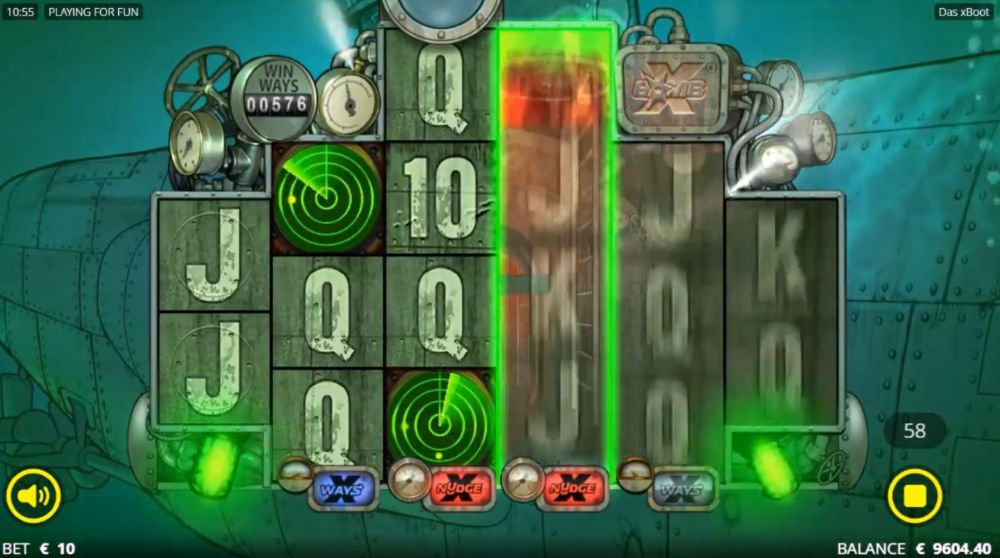 The RTP of Das xBoot is 96.05%, so just above average. Note that this is a Nolimit City slot with RTP ranges, though. That means you can get worse math models at different online casinos.

Visually, Das xBoot is quite a sight. It has a submarine in the background and the playing field itself is stylish. It has something to do with the grim realities of war and there are two types of symbols. The low-value symbols are card ranks from Ten to Ace.

Then, there are character symbols showing the different members of the crew. You’ve got chefs, engineers, and the captain. No prizes for guessing which one of those is the top pay. For a full line of captains, you can get 20x your stake. Aussies can’t play the slots of Nolimit City. But, pokies such as Sabres and Swords Charge Gigablox appear in the libraries of our top AU casinos online. 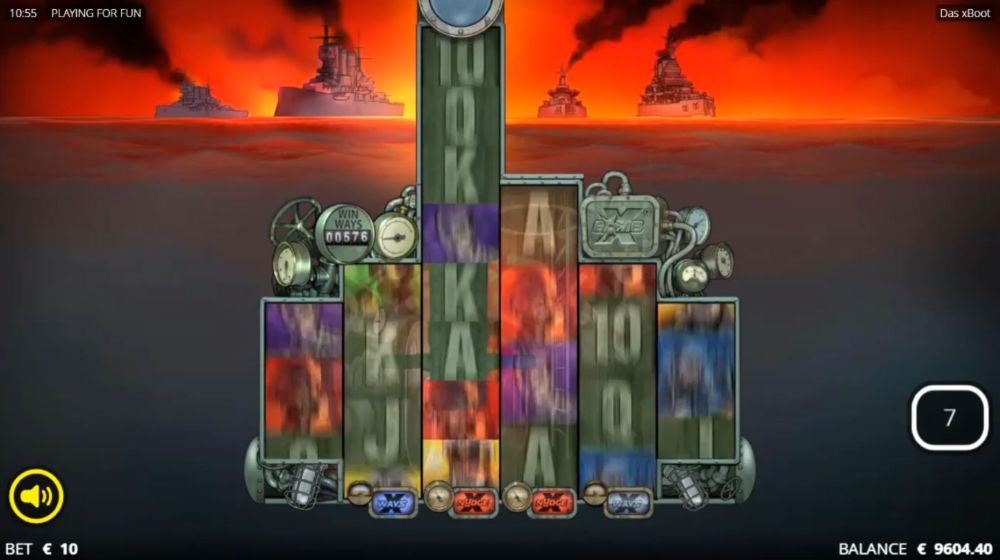 xNudge Wilds are 4-positions high Wilds that always nudge to be fully in view. They can land on reels 3 and 4. Even better, each nudge increases the associated win multiplier by +1x.

xWays symbols can land on all except the first reel. They can reveal up to 3 pay symbols, increasing the number of ways to win in the process.

If you get an xBomb Wild, you’ll increase the global win multiplier by +1x. Then, the symbol will explode and remove all no-win symbols from the board. It will then transform into a Wild, allowing you to get another win easily.

Sonar Scatters is your ticket to free spins and there are two types. Now, when 3 Sonar Scatters, you’ll get the Silent Hunter Free Spins with 8 free spins. Here, you’ll get a higher third reel, with 8 positions. If you get matching symbols in the first two reels alongside a Periscope Wild, you’ll get a torpedo launch.

This will increase the global win multiplier by +1x. You may also get a tack of Periscope Wilds to nudge down and increase your win multiplier even further. Also, each additional Sonar Scatter that lands add 2 bonus free spins to the tally.

For 4 Sonar Scatters, you’ll get the Wolf Pack Free Spins instead. Again, with 8 free spins and a chance to get 2 more for each extra Sonar Scatter. Here, you’ll get a special tube below the submarine, on reels 2-5. Torpedo Wilds can hit, dropping xWays symbols on their way. This can do wonders for the ways to win and win multipliers. The payout potential is even higher than in the Silent Hunter Free Spins!

Free spins trigger every 211 spins on average. You can buy into them straight away via Bonus Buy as well. For 75x your bet, you can get the Silent Hunter Free Spins. The Wolf Pack Free Spins will cost you 350x, on the other hand. Both options increase the RTP to 96.57% and 96.58%, respectively. 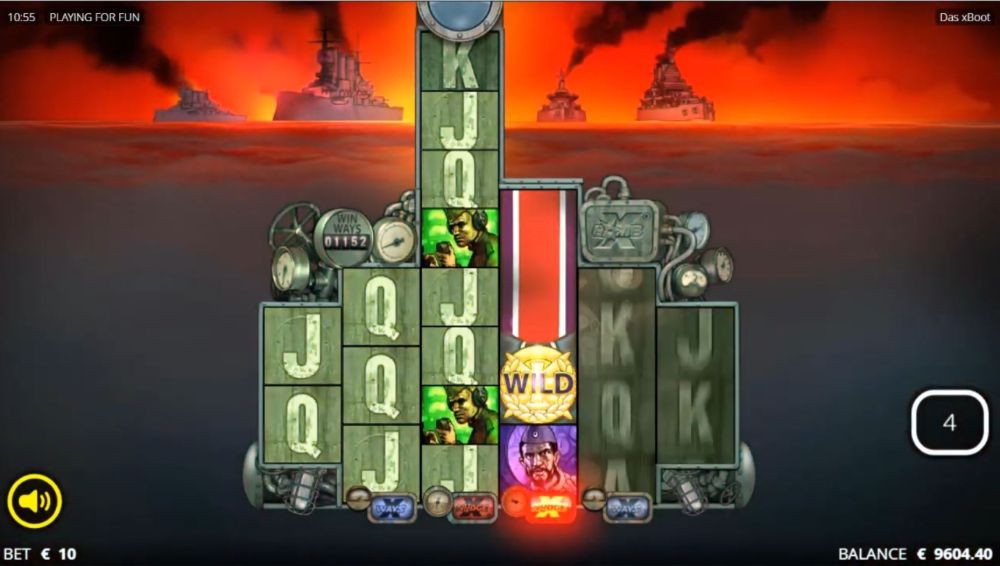 We played Das xBoot for 150 spins and we’ll be coming back for more. That’s how much the game impressed us. The theme caught our attention, but the bonus round kept us playing. Then, there’s the massive 55,000x+ jackpot that kept us wanting more and more.

The hit rate might be low, but we assure you that it’s fun to grind here. That’s because all the bonus rounds are fun. Some can even produce big wins. We had one big one ourselves, winning more than 150x our bet during free spins!

Das xBoot is an excellent Nolimit City slot with a fresh theme. It’s easy to fall in love with its varied bonus rounds, too. We’ve seen quite a few of them in previous Nolimit City slots. The huge jackpot is the proverbial cherry on top. The bottom line is that we can recommend Das xBoot to everyone who doesn’t mind high variance slots.

For a more casual alternative, we recommend Betsoft’s excellent Tower of Fortuna. It has a medium variance level coupled with some fun features. Also, a 3,200x jackpot, which means a top win of $30,720 if you play for the max bet. The key bonus round is about climbing the game’s tower. With each no-win spin, you’ll go up a level, increasing your win multiplier!