As a developer of online casino games Microgaming leads from the front. The games feature a lot of ebbs and flow, in-your-face graphics and at times multi-million dollar payouts. I decided to review The Dark Knight a 3D progressive Batman-themed jackpot slots since it epitomizes all of the above. It sports the usual 5 reel, 243 ways to win and a house edge of 7%. Therefore an average return to player (RTP) of 93% to the player and a top-paying jackpot of 4 million coins.

Since it’s a progressive slots it’s more volatile than your non progressive games. I played the slots with a bankroll of £50 and noted that it pays out on average after 10 spins. I lost my bankroll since the game is relatively tight. In my experience you need a hefty bankroll to play a progressive game even if it’s just to trigger the free spins. Maybe you will be luckier than I was but to me this is the average mean.

Many consider Microgaming’s Dark Knight a mega slots. It’s based on the Hollywood blockbuster 2008 Batman film The Dark Knight which yielded more than $1 billion at the box office. It’s the third highest grossing movie of all time. As you can see it was a resounding success. Practically speaking the slots took over where the film ended.

The game itself is awash with random cash rewards in the form of free spins, multipliers and Cinematic Spins. The highest paying symbols on the reels during the main game are the Batman and Joker. They appear randomly on the reels turning symbols into extra wilds with multipliers of up to 5 times which translates into lucrative cash prizes. But it’s the Joker (scatter) that steals Batman’s thunder during the base game. If two of them show up on the reels they trigger the free spins bonus game. 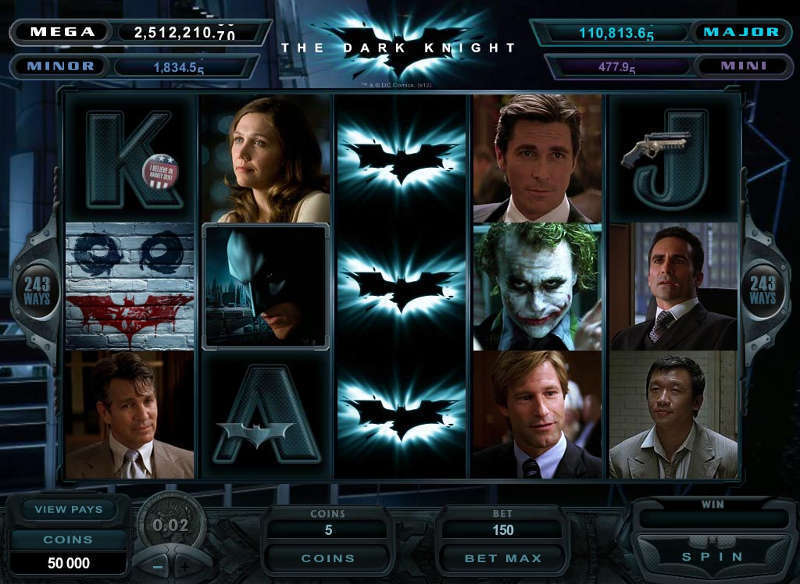 Truth be told this is a very exiting game to play not only because it’s a progressive jackpots but it’s littered with multiple in-play bonus features. Before I discuss these let’s have a look at your coin betting options first. Bets can be made from £$0.6 per spin up to £$6 per spin. Throughout the course of the game Cinematic Spins or actual clips from the movie are shown if you hit a winning combination. This makes the 3D slots more entertaining and realistic.

Free spins: The scatter is the Joker. When 2 Jokers appear across the reels the free spins bonus game is triggered. You’ll get 15 free spins with a multiplier win of 2x. Additional free spins can be won when the Batman and The Joker appear with a multiplier of up to 5 times. If you can manage this it will increase your cash prize significantly.

With high-end visual animations The Dark Knight is an iconic slots that stood the test of time. Even though it’s a couple of years old it is still one of the most played progressive games on Microgaming’s jackpot network. Your best chance of winning something is during the Free Spins. Of course if you can hit the progressive jackpot even better. Unfortunately the game cannot be played in the free mode only for real cash.