Creature From The Black Lagoon

Once again iconic casino game developer Net Entertainment teamed up with Universal. This time round it brings to life the 1954 horror film of the same name sake, Creature From The Black Lagoon to the world of virtual gambling.

Before I continue I’d just like to give you a brief overview about the film. A mysterious animal has been discovered in the tropical jungles of South America. A group of scientist decide to brave the treacherous journey in pursuit of the undiscovered beast (Gill-man). However, it’s the otherworldly creature that poses the most danger and not the beasts of the jungle. Against this backdrop, the stage is set for for one heck of a gaming experience.

Creature From The Black Lagoon 3D video slots has 5 reels and 20 paylines. I must point out it does not offer a progressive jackpot. Gill-man or so he’s called is the main character of the game and makes his appearance during the free spins. The average return to the player (RTP) is 96%, it’s a medium to high variance game. A maximum jackpot payout of 750 coins is offered. 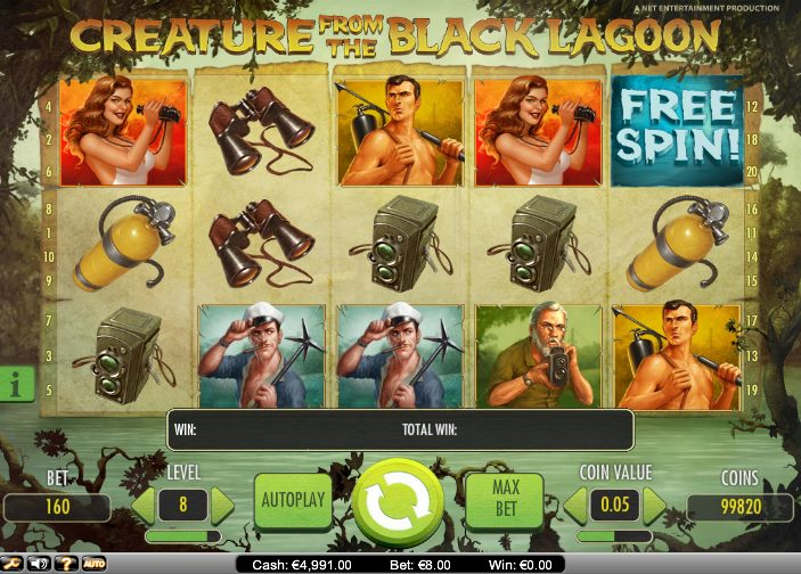 There are 3 wild symbols that appear randomly during the base game. An added feature of the wild symbol is that it’s sticky. In other words, if it appears it remains on the reels offering additional re-spins. Also, when the sticky wilds appear you can win up to 200 times your initial bet. Now this is what I call good value for money.

The free spins feature is activated when the hybrid human-fish captures Kay and carries her off to his underwater den. It’s triggered when three or more free spins symbols appear any place across the reels. The free spins are awarded as follow:

One of the features you must be on the lookout for is the ‘Target’ symbol. When it appears on reel 5 on the right hand side of your screen, you must shoot the creature. The creature’s health status is indicated by the ‘Health Meter’ at the bottom right corner of your screen. Every time you manage to hit the creature its health weakens. The health meter is divided into 4 levels.

Level 1: If you succeed in collecting 0-2 target symbols. Any wild that appears on the reels will become sticky and stay on the reels for one re-spin.

Level 2: When you collect 3-5 target symbols, it triggers the first wild. One position to the left the wild symbols will be spread out evenly and award one re-spin.

Level 3: The second spreading wild is triggered when you collect 6 to 8 target symbols. The wild symbols will spread out evenly across the reels and award 1 re-spin.

Levels 4: If you succeed in collecting 9 target symbols, an additional 10 free spins will be awarded. Wild symbols will then spread from left to right.

If you have an appetite for adventure albeit with a twist, Creature From The Black Lagoon won’t disappoint. What I like about this video slots is that it keeps you on the edge of your seat at all time. There’s never a dull moment. It’s more like an unfolding story than a virtual casino game. Expect a couple of dry spins but smaller payouts at regular intervals as well. The only gripe I have, NetEnt could have offered bigger wins during the free spins bonus feature.