Coat of Arms is a 5 reel, 25 payline video slots machine brought to you by game developer, Real Time Gaming (RTG). If you have a penchant for all things medieval then you’ll enjoy this game. to play for free or real money just click anyone of the recommended casinos above in the where to play section.

Medieval is often described as the dark ages or middle ages relating to a period of European history. Aside from the black (wild) and white knight (scatter). Additional symbols that play off across the reels are the castle, chalice, shield and expertly crafted card symbols 10 to Ace. One thing that strikes me about Coat of Arms is its impressive betting options.

The betting range starts off with a mere $0.01 up to $25 and the coin denomination $0.01 up to $1. Even though it’s a progressive jackpot there’s something in it for everyone. Scatter wins are added to the line wins and multiplied by the total bet. The maximum coin bet per payline is 25. 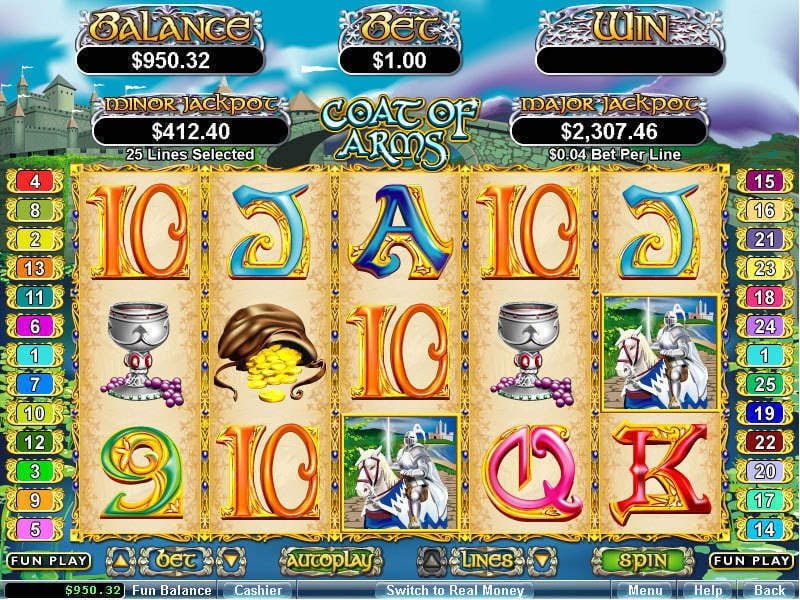 The White Knight is the scatter symbol. When two or more appear from left to right, the re-spin feature is triggered. The remaining reels will spin up to 10 times. After each re-spin scatter pays are awarded. When the feature is triggered by 5 scatters, the reels will re-spin ti the 5 scatter trigger position up to 10 times. Aside from the progressive jackpot, the maximum win during the base game that could be won is 5,000 coins. This jackpot is triggered when 5 Castle symbols appear on any payline. The jackpot can double up to 10,000 coins if the wild symbol forms part of the winning combination.

The jackpot is randomly triggered and can be hit during any stage of the game. The max. payout is 10,000 coins.

Although Coat of Arms is not as graphic rich as some of the other RTG games. I played it simply because it’s a progressive slots machine. What it lacks in the graphic department it’s medieval theme and progressive jackpot add another dimension to it.