Cluster Slide is a video slot from ELK Studios with a 7×8 grid. ELK studios like to roll our slot games with unusual grids and a few streaks of their own. With Cluster Slide, it doesn’t disappoint.

Moreover, ELK spices up play with 5x Wilds, a Generator Meter, and Multipliers. Hopefully, the game’s in-game features will help you win the jackpot of 10,000x your stake.

If you’re up for the challenge, bets start at $0.20 up to $100 per spin. The slots for real money now appears in the game lobbies of our top Canadian casinos online. We’d like to caution you that the volatility is high. Therefore, winning spins don’t come around often. Play starts with a Gold Series that expands the grid in conjunction with an Avalanche feature. If you catch 15 clusters in a row you can win as much as 500x your stake.

The slot has a sci-fi theme of sorts and it whisks you off to the planet Jellyton. The symbols on the reels appear in the form of jelly monsters. The slot studio further punctuates the game art with an explosion of colours. If you play the slot make sure you wear sunglasses. 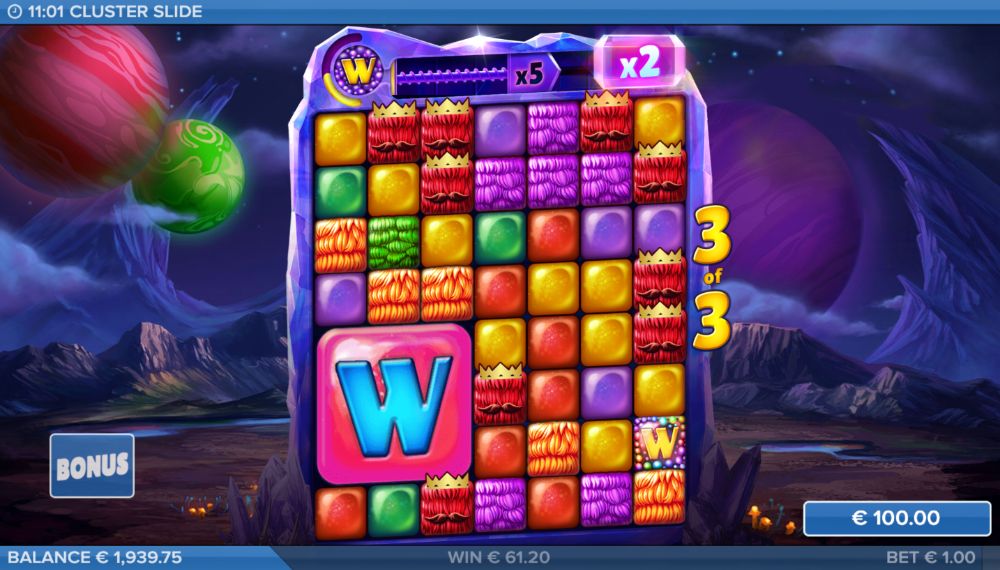 Cluster Slide plays it safe with an RTP or average return to player percentage of 96%. ELK Studios did not include the hit frequency. Based on our real cash slots play it’s in the region of 20%. Now, the symbols on the reels are jelly monsters of different colours. You’ll see green, yellow, blue, and red low-value symbols. Whereas the high-value symbols are the green, orange, purple and red monsters with fur on them.

Whenever a winning spin occurs they animate and they gobble up the other symbols. A striking feature of Cluster Slide is that it teems with Wilds. To form winning combos (clusters) they replace adjacent symbols.

Due to the United States’ current gambling laws. ELK Studios does not offer its games to the US casino market. However, prominent software providers like Betsoft still service USA casinos online. In fact, it’s the studio’s top market. 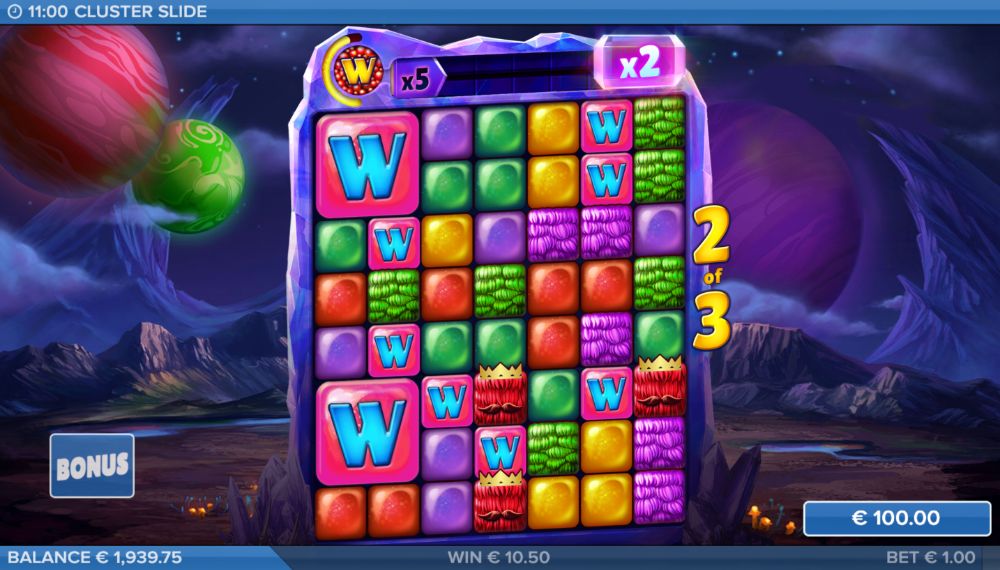 The Avalanche engine kicks in when 5 or more symbols of the same kind appear on the grid. The Avalanche feature removes the winning symbols and replaces them with new ones.

If you’re looking for an array of wilds the Generator Meter takes care of you. However, you need to fill it first with clusters, once you succeed; you can cash in on 1 of 5 Wilds:

If you manage to catch all 5 Wild Features the value of the multiplier you’ll play with will be 5x.

Now, the symbol with a ‘B’ on it awards you 3x Wild Drops. However, you need three of them. The first drop transforms the ‘B’ symbols into wilds plus an extra three 1×1 wilds. On the second drop, you’ll receive 2×2 symbols. Finally, the third drop rewards you with 3×3 symbols. 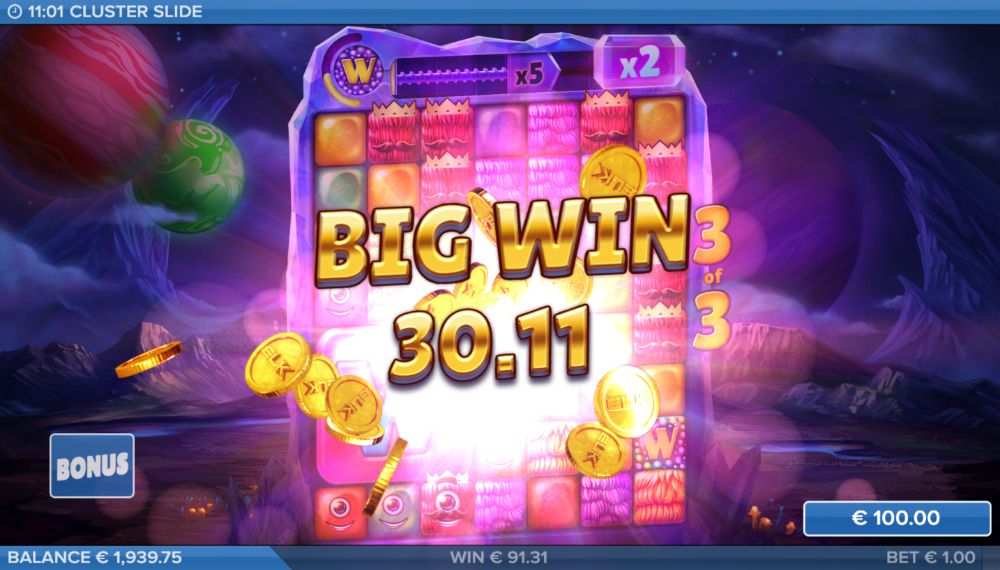 The X-iter feature enables you to trigger all the goodies the slot has to offer at a fee. It employs the same buy feature as Bompers. We’re saying this under correction. To activate the different drops will cost you 25x, 50x up to 300x your stake. It goes without saying the more drops you want the higher the cost.

Once you sign up at any of our reputable casinos that accept Canadians or players from Europe. You can play Cluster Slide for real money with your own money or the casino’s bonus. If you haven’t played the slot yet, we recommend that you play it for free first. Each casino offers a demo version of the slot. Furthermore, study the Paytable or the Help Screen since it provides a quick overview of the slot.

The base game has the ability to deliver a few gems of its own. A big shoutout to the Cascading feature as it pays as much as 500x for 15 in a row. This encouraged us to play the game because it’s the biggest payout the base game offers. Also, the most Cascades we caught were 7 which is a new personal record for us. Our previous best was 5.

The cash prize was 25x our stake at an average wager of $1. We triggered the Generator Meter and managed the ‘Big’ feature as it offered us a 2×2 symbol. The payout wasn’t as grand as we hoped. Perhaps we’ll have better luck next time.

ELK Studios is fast becoming a slots studio of note. Not so long ago we might we wouldn’t have included it in the same sentence as Microgaming or NetEnt. That ship sailed a long time ago because we hold the opinion that its slots are now superior.

Besides, no online slot is perfect and the studios still “snags” a few features from the likes of Reactoonz 2. The game engine and even the graphical display are similar. The distinguishing feature however is those cannibalistic little critters. During winning combos they become proverbial jumping jacks by chomping down on the other symbols. If you’re lucky enough the wins can be incredible. Incidentally, they’re also high-value symbols.

Then there’s the Generator Meter. It’s in a league of its own as it serves as a silo for all the wilds. Once it’s full, it explodes! Who knows a jackpot of 10,000x might just have your name on it. Despite a few similarities to Reactoonz. ELK Studios cobbles together a brilliant slot!