IGT (International Gaming Technology) is diligent in terms of innovating and evolving and more to the point in satisfying its players with a rich gaming experience. It released another ancient Egyptian themed video slots titled Cleopatra Plus on the 27th October 2016.

The game has 40 paylines, 5 reels and offers a top non-progressive jackpot of 1,500 coins. An interesting snippet about the slots is that it comes with a ‘Level Up’ feature which translates into ‘The more you play the better the rewards‘. Against the backdrop of the reels you’ll see the majestic pyramids. The return to player (RTP) is a vanilla 95%.

What can you expect when you play the game? Right off the bat it throws in a Stacked Wild which doubles all wins (2x) during the base game, a free spins feature that includes a bonus map where 30 free spins can be won. But this is not all, IGT added a few streaks which boosts multiplier wins during the free spins of up to 50x dubbed the ‘Super Spin’-they’re only available on certain levels.

Symbols on the reels include the usual card icons, Bastet (cat goddess), Aset, Amun, Hathor, Anubis and various other ancient Egyptian artifacts. The symbol that offers the biggest cash prize is the Cleopatra Plus logo, 5 of them at the highest bet pays you 1,500x your stake. 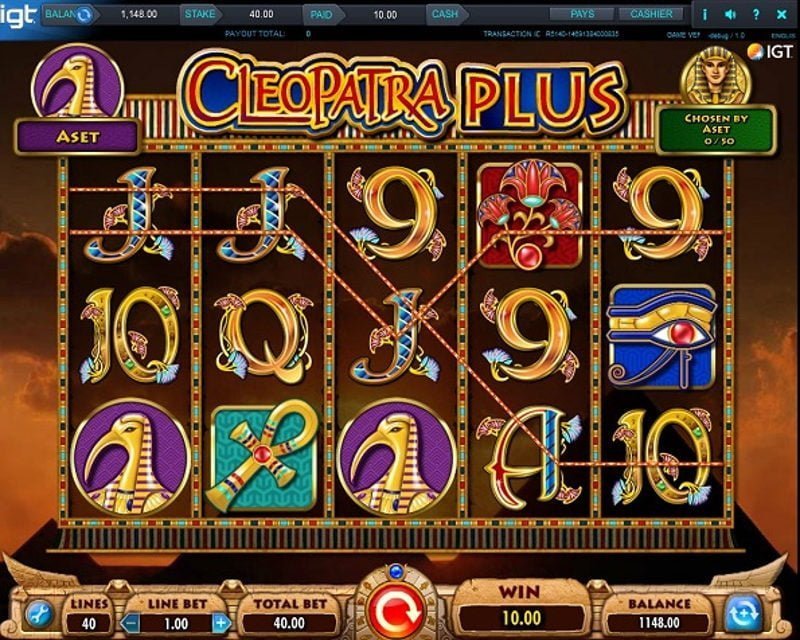 Once again I’m amazed by the coin diversity since it caters to players with different bankrolls. The spinning action starts off at 40 pence per spin up to a whopping £800. The game is playable on Androids, iPhones, iPads, tablets and desktop devices in the free mode or for real cash.

How The Level Up Works

To be honest I think it’s a innovative streak from IGT since it rewards prolonged game play unlike other slots. As you play you’ll accumulate followers (one follower per bonus symbol) until you unlock a new bonus symbol that awards you 2 or 3 followers. As you work your way up the various levels you’ll unlock stacked idols, bonus maps, free spins with multipliers and then there’s the Super Spin feature.

All wins are doubled (2x) when 2 or more wilds appear on the reels during the main game. Keep in mind the wild also acts as a 2x stacked wild where stacks of 10 with 2x multiplier wins pop up.

The Cleopatra Free Spins feature is unlocked/triggered when 3 or more scatter icons appear (regardless of position). A new screen opens up with a bonus map where you must pick one: Alexandria, Nile River Valley or the Pyramids of Giza. In general the maps offer the same cash prizes but when you hit levels 7 to 8 the Pyramids of Giza offer the biggest wins.

The free spins starts off by rewarding you 5 with a 1x multiplier-not much I know but bear with me, it gets better. The number of bonus symbols used to trigger the feature depends on the amount of followers you have-it starts with 3 and 7 followers. Once you’ve selected the map you wish to play with, followers can be spread out in any location or you can lump them all into one place.

The key in this section of the game is the location in which you placed your followers, it reveals the number of free spins (30 of them) with possible 5x multiplier wins. The free spins multiplier (depending on location) can shoot up to 50x. An additional 20 free spins is added if you’re on levels 1 to 5 with 4x multiplier wins paying out a cash prize of 18x your stake.

The nice thing about Cleopatra Plus is that it has a built in memory. In other words you won’t lose the progress you’ve made if you stop playing. I’ve played the game and reached level 8 and managed a nice win (1,500x my stake) when the 50x multiplier kicked in triggering the 10 Super Spins-my biggest win on any slots! If you’re fortunate enough to trigger the last spin multiplier on the last spin of the free spins, a giant multiplier can pay up to 350x your stake.

IGT’s Cleopatra Plus might come across like trying to navigate a complicated metropolis without a road map or GPS. However, the trick of the slots is to keep on spinning those reels by unlocking new levels that offer increased cash prizes. The free spins feature is responsible for the biggest wins, but if you hit those multipliers and a couple of Super Wins you’ll win the proverbial riches of ancient Egypt. A tad complicated to my liking but really an entertaining game which I consider to be medium to high variance.