It Came From Venus

It Came From Venus is another classic 3D progressive jackpot slots release by Betsoft. With 30 paylines and 5 reels it’s easy to see why it’s a winner with players. A flesh-eating plant lands from outer space on the Sketters farm. Old Sketter and the plant form an unlikely bond. However, being an alien life form it’s not long before the government starts snooping around.

You’ll note that the game is replete with colorful icons that becomes animated when it pays out. The slots machine is like the little shop of horrors but with a ‘Hillbilly’ twist making it fun to play and it’s also funny to boot. The maximum jackpot win is 15,000 coins and the average payout ratio is 96.7%. It Came From Venus can be played on all desktop and mobile devices for real cash or for free. 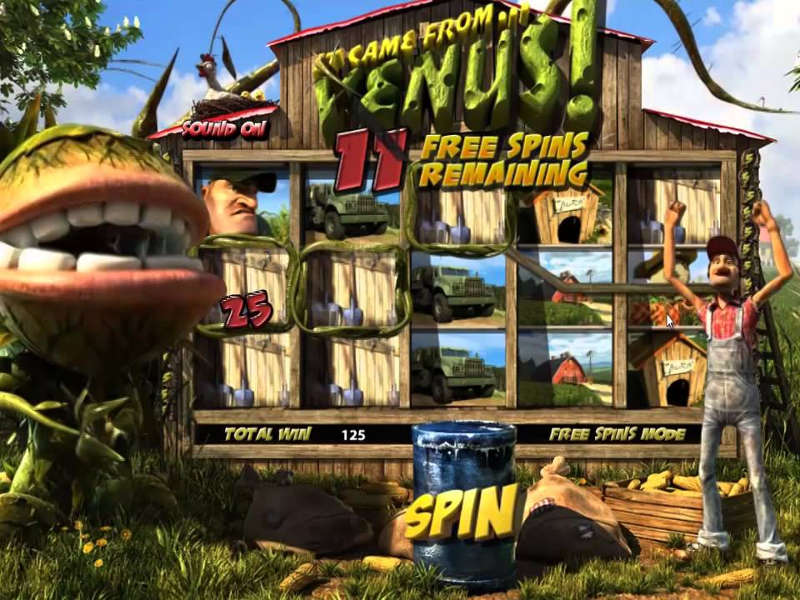 Five icons have a multiplier of 5x your initial stake. I hit 5 Barn House symbols at the max. bet of $150 per spin and won 625 credits. The scatter is the ”The Do Not Pass” symbol. If 3 scatters appear any place on the reels you’ll be smiling from ear to ear. Unlike other slots machines the scatter symbol does not trigger the bonus game.

Having an alien plant for a best friend has its own rewards. The more you feed it the more it pays out. It Came From Venus 3D slots offers you more bang for your buck. With loads of in-play bonus features it’s one of the loosest games I’ve played. Just a quick heads up. If you play the game from your mobile phone (Android or iPhone) I suggest you switch on your Wi-Fi. The game is loaded with high-end graphics which chews up normal cell phone data in a jiffy.

Once in a while a slot machine comes along that’s captivating and highly entertaining. It Came From Venus is one of those games. The game appeals to players with different budgets. The fact that it offers a progressive jackpot with healthy multipliers, scatters, free spins and wilds makes it a guaranteed crowd pleaser in my books.