Caishen’s Arrival with its 5 reels and 25 paylines from Betsoft Gaming whisks you off to the Far East. It’s not like we already had our fill of Asian-themed 3D slots for 2019. Players and software houses can’t seem to get enough of them. Why else would they keep on rolling them out?

This time around the developer focuses on Caishen, the Chinese God of Wealth, a mythological figure worshiped in the Chinese folk religion. His persona is depicted frequently on the back of a tiger. In Chinese culture, opulence is highly valued and of course, encouraged. If you are still new to gambling at online casinos, we also tell you how to play slots for real money.

The demand for Asian-themed slots continues to rise thanks to low-cost Internet access, penetration of mobile devices, and technology that keeps advancing at a rapid pace.  Cyber casinos that target the Asian market is one of the fastest-growing industries in the world, which explains why so many games are coming off Betsoft’s production line. The game’s visual representation is flush with colors of red and gold. The color Red symbolizes good luck, joy, and happiness while Gold also signifies wealth in the Chinese culture.

With a top cash prize (non-progressive) of 10,000x ($50,000) your stake up for grabs on a single spin, there is plenty in Caishen’s Arrival to keep the reels rolling. This includes an assortment of in-game bonus rounds that incorporate Re-spins, Free Spins with a 3x multiplier and a Caishen Wild that forms winning combinations when it replaces adjacent symbols. The slots is fully compatible with mobile phones (Androids, iOS and tablets). Caishen’s Arrival is now playable at our best online casinos from $0.25 to $5 per spin.

Symbols on the reels are the Golden Purse scatters, Red Ticket free spins symbol, the Caishen Wild (expanding), cards from 10 to Ace (low value), bonsai tree, tortoise, gold bell, golden cup, red envelope and bag with coins. This Chinese themed slots has a theoretical return to player percentage (RTP) of 95.74%, or an edge to the house of 4.26%. 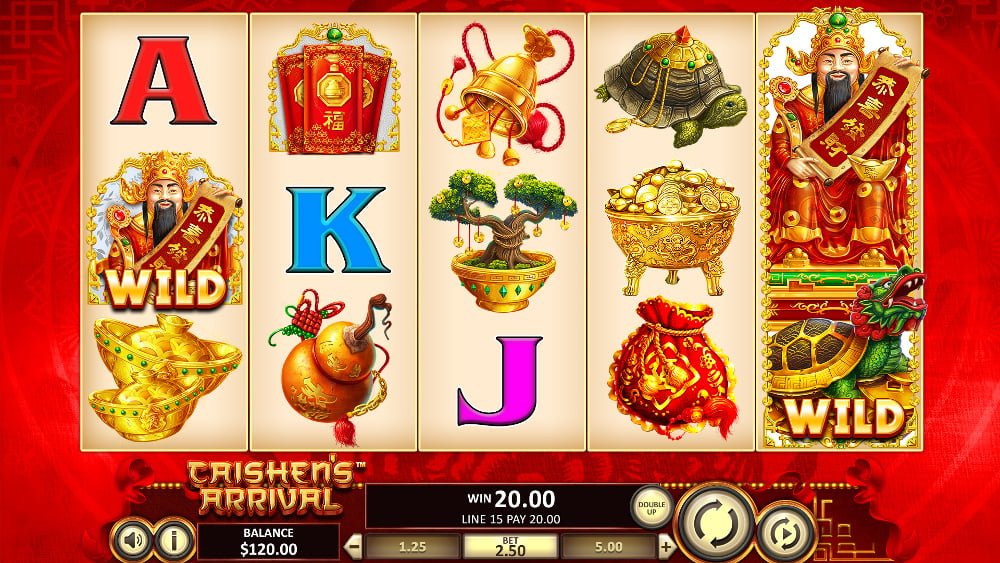 The premium symbol is the Caishen Wild. During winning combinations, the wild both serves as a stacked and standard wild. The wild symbol only pitches on the center reel. When it does pop up, it offers a re-spin, and it expands to cover the entire reel.

The Free Falls is Caishen’s Arrival most lucrative bonus round. To get into the feature, the Red Ticket scatter must appear on reels 1 and 5 respectively, and 10 Free Falls are awarded. The free spins also profits from a 3x multiplier (triples all wins) for the big wins, and the stacked wild pops up now again too. The game’s second scatter is the Coin Purse. When it appears adjacent to a wild/s, the wilds replace them for added cash prizes. 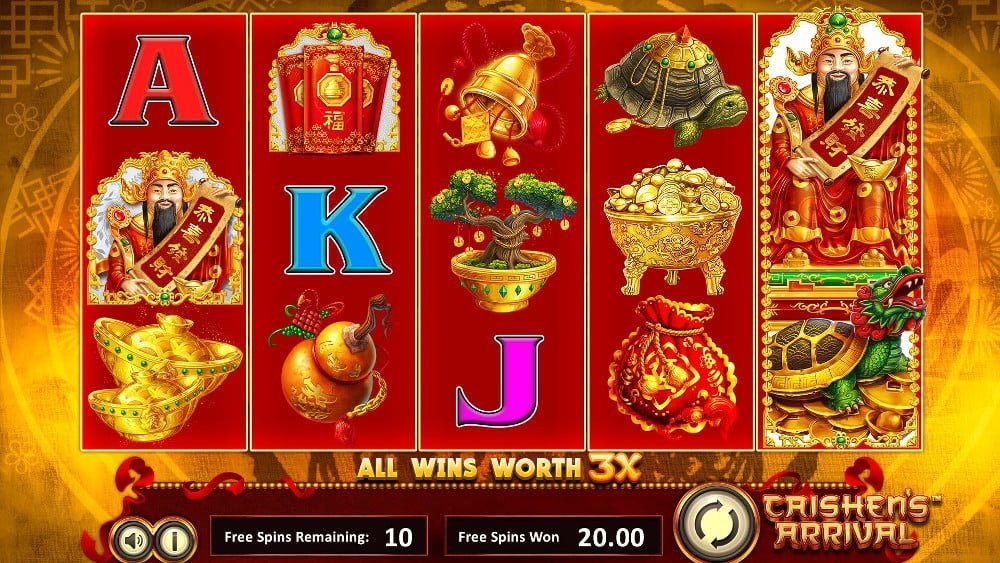 There are plenty of slot machine releases from other developers that mimic the theme and mechanic of Caishen’s Arrival’s; therefore, it’s not unique. Just like last month’s salary, we don’t think this one will stick.

Despite a slew of amenities like Re-spins, Stacked Wilds, Free Spins and scatters that combine with the wilds, the RTP of 95.74% tarnishes it a bit, because you’ll have to spend a few bucks if you want to win anything substantial. It’s a shining example of close, but no cigar, unfortunately. Should you be looking for a slot game that has a higher hit frequency, a higher RTP, more volatility, and plenty of bonus rounds, we highly recommend Bamboo Rush. 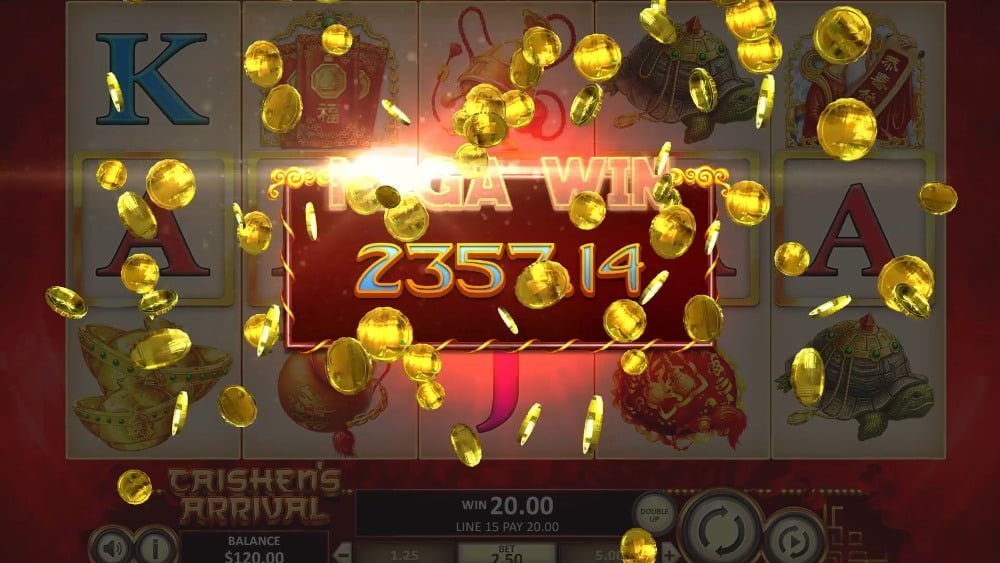 How Can I Trigger The Free Spins Feature?

Triggering 10 free spins, the free falls bonus is played when the red ticket scatter shows up on the first and 5th reels. In the free spins feature, the payouts are increased by 3x multiplier wins and stacked wilds. Due to the slots’ lowish RTP, we are inclined to speculate that it may take 70 or more spins to get into this feature.