Bushido Ways xNudge from Nolimit City takes players to the land of the “Rising Sun”, to be exact Japan. We seldom see an online slot with the theme. And, when Nolimit City rolls one out we take out pen and paper and start taking notes. The real money slots studio is now a software provider of note. One of its 2021 top releases, East Coast vs West Coast still has the industry buzzing. 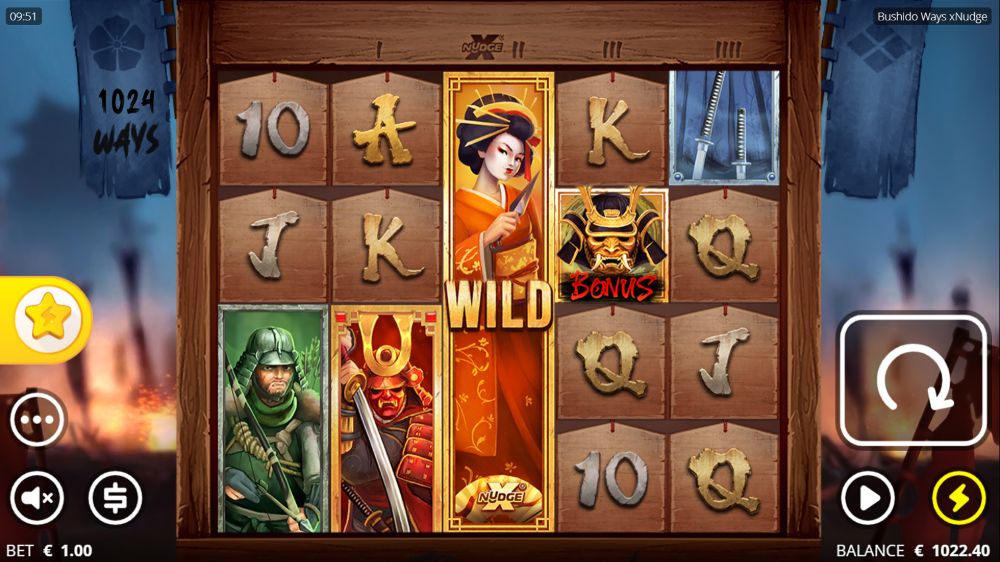 The theme of the Bushido slot is all about “The Way of the Warrior“. In Japanese culture, the warrior, or in this case the Sumarai epitomizes everything about their lifestyle and worldview. Even though there are no longer any Sumarais; the spirit of Bushido still remains. So, if you want to release the warrior within you, Bushido Ways xNudge is the perfect way to do so.

With regard to the slots’ in-game features. You can look forward to Wild Geishas, Sliced Wilds, and Oni Transformations.

Play takesplace on a 5 reel, 4-row grid with 1,024 ways to win. Moreover, Nolimit City chugs up a Sliced Wild feature that enlarges the grid. The reel set showcases the aftermath of a gory battle. Japan has a chequered history because during medieval times it had a bloody civil war. Several Japanese factions waged war against each other. Suffice to say, it was a blood bath on an epic scale.

Players can spin the reels from $0.20 to $100 per spin at our finest mobile casinos online. Bushido Ways xNudge loads seamlessly on mobile devices. Now, just a cautionary note before we press on.

The volatility clocks a 9/10 on the Whizz’s slots scale. As a result, winning spins are as scarce as a Catana blade. More importantly, you can play for a jackpot of 30,000x your stake. If you bet the max wager of $100 the earning potential is $3 million! 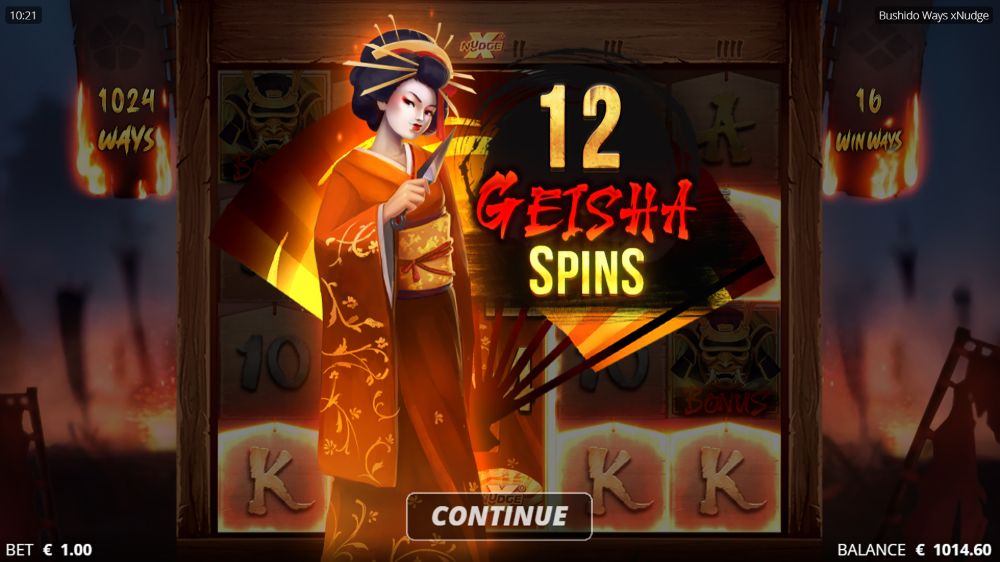 The RTP or the average return to the player of Bushido Ways xNudge is 96.01%. Keep in mind that online casinos can tinker a bit with the RTP. In other words, some sites will offer you a better payback rate than others.

The hit frequency is 25% meaning you’ll catch a winner on every 4th spin. Given the volatility of the slot, it’s good. A battlefield flanks the reel set. The symbols on the reels are card suits, Samurai warriors, a geisha, and the Bonus symbol.

To receive a winning spin you must land 3 or more symbols of the same kind. The warrior symbols can expand to cover an entire reel. The premium symbols offer payouts in the region of 1x to 2x your stake. Needless to say, it’s low.

American players can visit our legal casinos USA online for the best deals in Vegas. They offer hundreds of engaging slot machines from developers like RealTime Gaming and Betsoft. They offer bonus codes of up to 500% to play the best slots for money.

The Wild Geishas are 4-row high wilds that pitch only on the centre reels. When a fraction of the pitch the game’s engine nudges them to cover an entire reel. Thanks to the xNudge feature with every Wild Geisha nudge; the multiplier value increases by +1. Moreover, the Wild Geishas sub symbols adjacent to them to form winning combinations.

Tile Wilds pitch on reels 2 to 5 and when they appear on reels 2, 3, or 5; they slice into 2, 3, or 4 symbols. Hence the name ‘Slice Wilds’. Above all, they increase the win ways up to a phenomenal 12,288 ways. As they move further down the reels they also copy themselves before they slice.

The scatter is the Bonus symbol with the intimidating Samurai mask. When they appear as stacked symbols they initiate the Oni Transform bonus round. The scatter symbol transforms the low-value symbols into high-paying warrior symbols.

Then there’s the all-important bonus round – the Free Spins feature. You can trigger it in two ways. When 3x scatters pop onto the reels set they trigger 8 Shogun Spins. For every scatter that pops you’ll bag an extra free spin. Furthermore, the Geisha Spins also grace the feature. It rewards you with plenty of wilds and an extra spin for every nudge.

In case 3x scatters, and a Wild Geisha pitch simultaneously; you’ll catch 8 free spins. Unlike the previous free spins trigger, an interesting twist occurs. For every Wild Geisha Nudge, the value of the sticky win multiplier can go as high as 4x. Without complicating matters; the game engine drops at least one wild on reels 2, 3, or 5.

If you want to cut to the chase, you can trigger the Shogun Spins at a cost of 70x. But, the Geisha Spins will cost you a mammoth 700x your stake.

We’re not afraid of slots online with bruising volatility. It just makes us more calculated than we already are. We know they can wipe our bankroll out in only a few spins. We took the safest route available to us and that was to play the slots for free.

At an average bet of $1 per spin, we set the Auto Play feature to 10 spins. We received 3 winning spins or a hit rate of 30%, slightly better than the advertised 25%. From there on end, we played the slot at 25 session intervals.

The hit frequency dropped to around 15% to 20% but the pays in the base game were good. The average wins hovered from 0.5x to 7x our stake. Instead of triggering a bonus the normal way we triggered the Shogun Spins at a cost of 70x.

Upon conclusion of the Shogun Spins, we won 35x but still down on our initial investment of 70x. The point is just because you can trigger a bonus outright doesn’t necessarily mean you’ll show a profit. Since we played with free credits we also activated the Geisha Spins bonus.

It’s crazy expensive at 700x our stake. Though it can reach a maximum of 12,288 ways we never came close to it. We managed a few wilds but the payout we received didn’t justify the cost to trigger the feature. Once again it demonstrated to us how risky the bonus buy feature can be.

The best slots strategy we can give you when it comes to volatile slots; play it for 100 to 150 spins. Keep your bets down to a minimum even if you’re a high roller. Cash-out if you received a big win and continue to play with your original bankroll.

Nolimit City raised the bar extremely high for itself with its previous releases. Therefore, our expectations were sky high before we even reviewed Bushido Ways xNudge.

Compared to San Quentin, the slot is not on the same innovative keel. Yet, it brings to the table a bunch of arresting features such as the xNudge, Sliced Wilds, and multipliers. Of the bonus rounds, the Oni Transformations is the easiest to catch. As it awards a bunch of wilds on a single spin.

The Geisha Spins offers a sticky wild that covers an entire reel; not too bad we say. However, the game engine pivots around those sliced wilds. If the green samurai pops with a bunch of Geisha and Sliced Wilds – you can win thousands of dollars! Bonus hunters chasing the max win of 30,000x will have to battle Japan’s finest samurais for survival. Suffice to say, your chance of defeating them is remote.