Once again I’m amazed at the quality of the games Net Entertainment keeps on rolling out. This time round it released Boom Brothers 3D non-progressive slots. The game features 5 reels and 20 paylines.

Broom Brothers is a unique slots and draws its inspiration from mining for minerals deep beneath the earth’s crust. Game symbols that show off across the reels are the Boom Brothers, diamonds, rubies, gold and three dwarves. The average return to the house is 3% giving this game a 97% return to player (RTP). The total jackpot payout is 112,500 coins. Expect a lot of wins during the base game.

You can select the amount of paylines you wish to play, they start off with 1 to 20. The minimum wager per spin is $0.2 up to $100. There’s something in it for penny pinchers and high rollers. Normally the base game of most slots machines are dull and drab. Luckily this is not the case with Boom Brothers. I like the fact it added a 2nd Chance feature. When it appears a winning spin is awarded by one of the Boom Brothers. Just a pity this feature doesn’t offer larger wins. That said, I’ll take it any win is better than a dry spin. 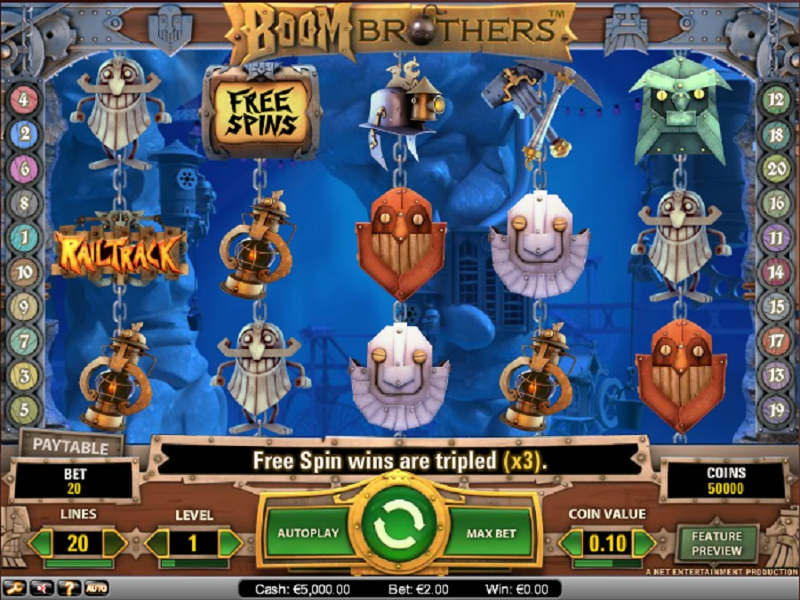 The Bomb icon is the wild symbol. It substitutes all the other symbols on the reels except the scatter (Free Spins symbol) to form a winning combination. The Free Spins bonus round is triggered when 3 Free Spins symbols appear across the reels. I tried but no luck. Triggering the free spins bonus round is not easy. However, you might be luckier than I was. If you manage to trigger it you’ll receive 8 to 50 free spins. As an added incentive, your winnings will be multiplied by a multiplier of 3x. Now this is what I call hot dog.

When 3 Railtrack icons appear on reels 1, 2 and 3 the Railtrack feature is triggered. In the bonus round 3 carts appear. Each cart contains a gold bar, diamond and ruby. You must pick a cart each has its own reward. But, there’s a minor snag.

Once the bonus round opens up one of the Boom Brothers will appear on the Railtracks and you must spin the reels for an additional two tracks. If you succeed you’ll advance to the bonus round, if not you’ll return to the base game. Suffice it to say I managed to unlock it three times and won $500-a nice little windfall indeed.

Boom Brothers was released in December 2010. In virtual terms this is an old slots but the game graphics and animations were way ahead of its time. This is a great game and I really had fun playing it. Expect loads of wins during the base game, it’s easy to trigger the Railtrack bonus round. Unfortunately I can’t say the same for the Free Spins bonus round. Hard as I tried I couldn’t trigger it.