Released on the 18th of October 2016, Novomatic’s Book of Ra Deluxe 6 is one of the best online slots I’ve played this year. It comes with 10 paylines, 5 to 6 reels and takes off where its predecessor Book of Ra Deluxe ended. The sixth reel really makes a huge difference and boosts payline wins by a considerable margin.

What makes the slots shine is its free spins feature with a randomly chosen symbol plus wins during the base game are really good too. All in all this video slots with its distinct land-based casino flavour is a high roller’s dream. Caution is advised though since it can cut through your bankroll faster than a warm knife through butter. The game plays just as well on mobile devices as it does on desktops. It can be played for free or for real cash and it whisks you off on an epic journey to the land of the pharaohs and pyramids like never before (https://casinowhizz.com/slots/book-ra-deluxe-slot-review-bonus/).

Graphics wise it’s pretty much the same as its 5 reel cousin, the only difference this time round is that it’s set within a pyramid. The audio of the game is captivating but even better once the free spins feature is triggered-it reminds me a lot of Loreena McKennit’s hit song of ancient Egypt. The symbol that offers the highest cash prize during the main game is the archaeologist, when 6 of them pop up on the reels at the maximum wager per spin, you’ll win a jackpot of a whopping 7.5 million coins. The game offers a return to player percentage (RTP) of 96%. 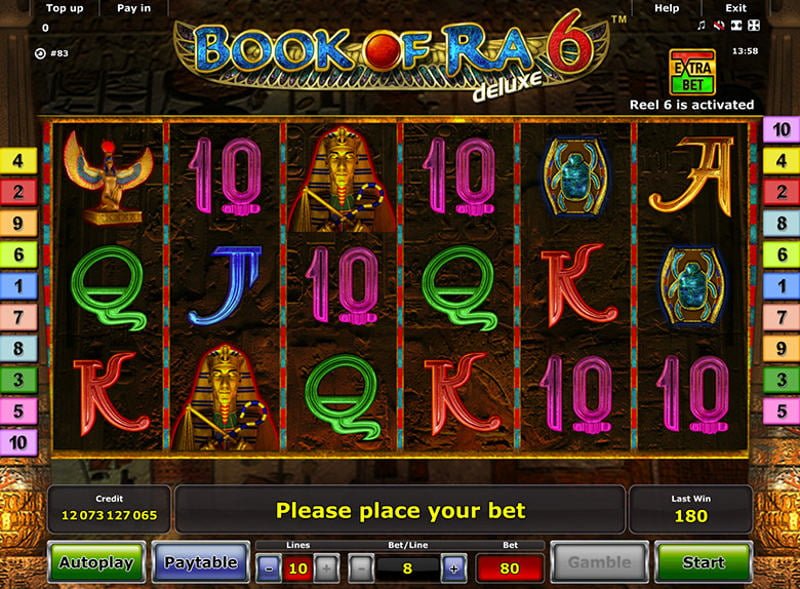 The ‘Autoplay’ button is a handy feature since it spins the reels automatically for you. Once you have activated the 6th reel the reels can be spun from 40 pence up to £100. There are 10 paylines (1 to 10) and the Bet/Line is from 8 to 1,000 plus it incorporates a Gamble game where winnings can be doubled.

During the base game the Book of Ra acts as a wild when it substitutes all the other symbols to form a winning combination. To give you an example. If 3 archaeologists appear along with to wilds you can win up to 100x your line bet.

Book of Ra Deluxe 6 really comes alive during the free spins feature and you’re guaranteed some incredible wins providing you’re lucky enough to trigger it. The scatter symbol is the Book of Ra, 3 of them on the reels, regardless of position triggers the free spins. You’ll get 10 free spins, Novomatic added an excellent streak which really boosts wins with an ‘Special Expanding Symbol‘. When the expanding symbol appears during the free spins it expands by covering all 3 positions on the reels. Suffice it to say you can win up to 200x your stake if all 6 of them pitch. The free spins feature can be re-triggered giving you another 10 making it 20 free spins in total.

Not wanting to blow smoke up Novomatic’s Book of Ra Deluxe’s skirt but without a doubt it’s the best slots I’ve played in a while. It offers some incredible payouts especially if the 6th reel is turned on. Triggering the free spins is not easy but I was fortunate enough to trigger it twice in quick succession and won £1,500 at an average bet per spin of 200 coins. Just in keep in mind that triggering the free spins can be an arduous task especially at the highest bet level. If you’re lucky enough to trigger it you can win a cash prize worthy of a Pharaoh.