Play N’ Go’s Big Win Cat will be popular among female slot players. The ladies love slots and what makes the game even more interesting is that it has a cat theme based on an Asian novelty shop.

The game is fitted with 5 paylines, 3 reels, a re-spins feature with a Wheel of Multipliers up to 10x, a RTP (return to player percentage) of 96.2% and it pays a top non-progressive jackpot of 800x your stake!

Player can start spinning the reels from 5 pence up to £100 a spin be it on PC desktops or mobile devices at all Play N Go Casinos. There’s a free play version as well which comes in handy since it gives you an idea how the game pays at different coin levels and how many spins it takes to trigger a bonus feature. Talking of which it’s jazzed up with a Re-spin of Luck and a Wheel of Multipliers feature which we’ll discuss in a bit.

Symbols on the reels are bells with blue ribbons, tiny bags, flowery fans, pigs, turtles, gold coins, cat toys and goldfish. Against the backdrop of the reels is the Asian novelty shop. 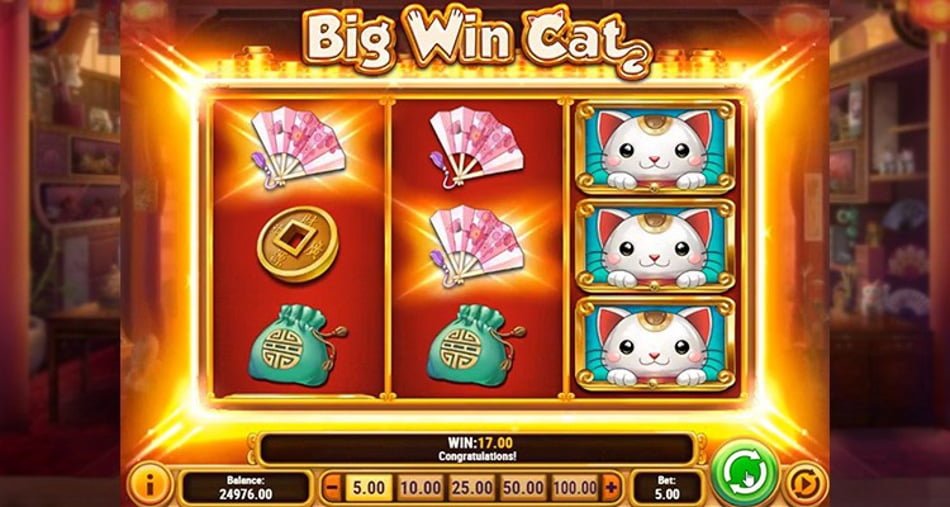 The audio is quite refreshing, normally we hit the mute button after 20 spins or so, not in this case. The wild cat is the symbol that pays the top prize, 3 of them on a payline at the maximum bet pays 24x your wager. An Auto Play feature spins the reels automatically for you up to 50 times.

The cat is the wild it completes winning combinations when it substitutes other symbols adjacent to it.

When the same symbols appears stacked on two reels the Re-spin of Luck feature is played which improves your chances of getting a decent payout.

Now if the same symbol pitches on all three reels the Wheel of Multipliers is triggered, you’ll see a wheel with multipliers up to 10x-the cat spins the wheel and when it stops on a multiplier the payout you got will be multiplied by. Suffice to say wins can be really big here as much as 800x your bet!

Strange as it may sound we really enjoyed Play N’ Go’s Slots Big Win Cat which we find to be of medium variance. It’s a simple slot that offers some great winning potential especially when the Wheel of Multipliers is triggered where you can pocket as much as 800x your stake on a single spin. Just a pity it doesn’t contain a free spins feature but we’ll leave it at that for now.