Powered by Quickspin casino software, Big Bad Wolf video slot is based on the fairy tale of the same name. The game features 25 paylines, 5 reels and pays a top non-progressive jackpot win of 1,000 coins. It can be played on mobile phones and PC desktops from 0.25 pence per spin right up to £250 per spin.

The game’s main draw card is its free spins feature where up to 20 free spins along with multipliers of 3x can be won (tripled payouts). It comes with a tumbling reels game mechanic where where winning symbols are swooped from the reels. When a slew of pigs appear on the reels they’re turn into wilds offering multiple wins. In addition to the free spins there’s a ‘Blowing Down the House’ bonus game where moons must be collected to win extra spins and those elusive multipliers.

If you’re not afraid of the big bad wolf you’ll find that the graphics and animations are well-thought out and crafted. Suffice to say it does the fairy tale justice.

Paying symbols on the reels appear cartoon-like, you’ll see the big bad wolf, the pigs and cards from 10 to Ace. The symbol that pays the biggest cash prize is the piggie with the straw in its mouth, 5 of them at the max bet pays 300 coins. Big Bad Wolf offers a theoretical average payout percentage to the player (RTP) of 96.3%. 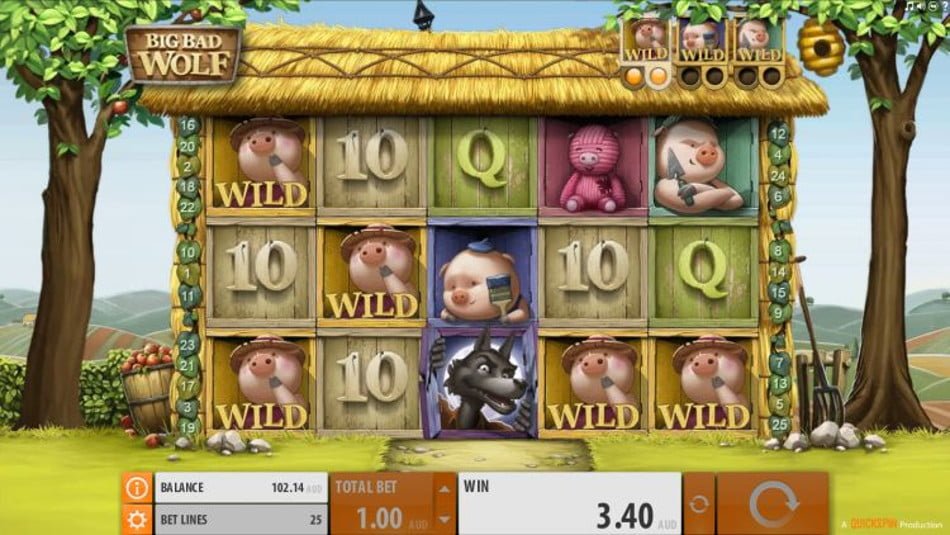 Players can spin the reels faster by utilizing the ‘Fast Play’ option. There’s a tab where you can adjust your coin range according to your bankroll. The audio fits the theme of the slots well adding another dimension to it. It’s got a bit of a farm beat to it if you will.

This is the meat (pork) section of the slots. Must say we’re pretty impressed with Quickspin’s swooping symbols mechanic, it kinda reminds us of NetEnt’s Gonzo’s Quest (Avalanche Reels).

Big Bad Wolf places a new spin on the word ‘Wild’. Although the beehive is the regular wild, the 3 little piggies also transform into wilds should they appear a number of times in quick succession.

After 2 wins the first pig becomes a wild, after 2 wins the second and after 6 wins the third turns into a wild. In the top right hand corner of the reels there’s a ‘Reel Meter’ (3 Piggies) which helps you to keep tabs on proceedings.

The scatter symbol is the wolf, 3 of them any position on the reels triggers the free spins awarding 10 free spins. It’s a re-triggerable free spins feature should another 3 or more scatter wolfs appear, they triple all wins as well. One thing we notice is that it’s relatively easy to trigger the free spins bonus mode.

Blowing Down The House

This is the last bonus feature, here you must try and land 3 Moon symbols on the reels, if you manage 2 additional spins will be awarded. If you succeed in landing 6 Moons you’ll blow down the brick house and receive an extra 2 spins along with a multiplier of 2x double all payouts.

Big Bad Wolf slots is of medium variance, thanks to its swooping reels feature payouts during the base game is good while the biggest wins occur during the free spins. It’s really a fun slots to play but it can be a tad heavy on the pocket so make sure you play it with a sturdy bankroll.