Yggdrasil Gaming is fast becoming the number one internet gaming developer of choice for most online casinos. The vendor is known for releasing games with high resolution graphics and entertaining themes. This time round it knocked another one out the park with its latest show stopper, Bicicleta video slots. If you’re wondering what Bicicleta means, in soccer it’s the name for a bicycle kick in Spanish. The game features 25 paylines and 5 reels with a maximum bet of £50 per spin.

The game’s animations are not sharp since it’s a football themed slots but payouts are huge-even during the main game. It comes with wilds and free spins. Five red shirt soccer players at the highest bet pays out of 250 coins. Different coloured card suites that resembles a football offer payouts but they’re quite low. The game’s release coincides perfectly with the Euro 2016 Football Championship. The average payout percentage is 95.6%. Bicicleta can be played on all mobile devices and desktops.

With a payout ratio that’s slightly above 95% it’s a bit more volatile than most Yggdrasil games. It pays out on average after every 5 spins but it pays out well. When a wild appears in a winning combination with 3 or more symbols you’ll win a hefty chunk of cash. Without any further ado this is a great game. It appeals to both soccer and non soccer fans. 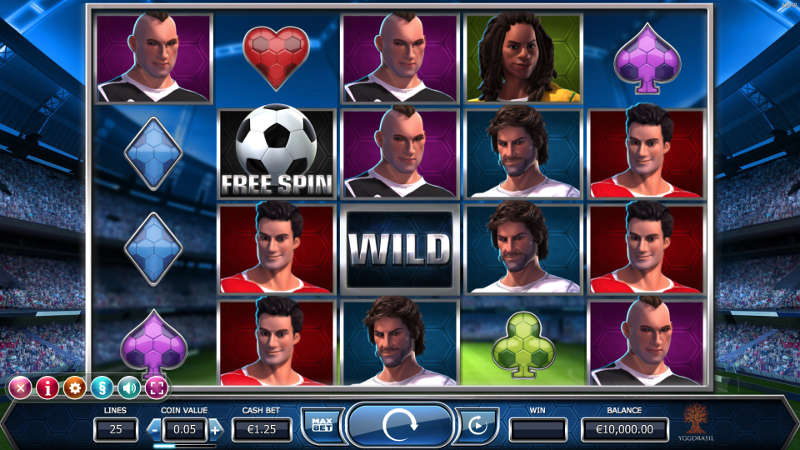 There are 2 bonus features: wilds and free spins (football). The wilds pops up regularly during the base and also responsible for the highest payouts. By way of payouts the 4 football players (each sporting different haircuts) don’t offer much. This is why it’s important to shoot for those wilds.

Wild: When the wild appears on an active payline it substitutes any symbol adjacent to it except the scatter (free spins) and trophy icons.

Free Spins: When 3 or more free spins icons appear anywhere on the reels the free spins mode is triggered. Three footballs award 8 free spins, 4 of them award 16 free spins and for 5 of them you’ll get 24 free spins. The only caveat I have is that the free spins can’t be re-triggered.

This is not the type of game that offers a slew of wow graphics. Expect loads of dry spins during the main game but when it pays out it will put a smile on your face. Features that make it a winner are the free spins, wilds and trophy icon. Look out for the trophy symbol especially when it forms a winning combination with the wild. I’d say Bicicleta holds its own against NetEnt’s Football: Championship Cup.