Beetlejuice Megaways has 5 reels, up to 12 rows, and its paylines clocks an amazing up to 248,832 ways. As you can see there’s a lot of action on the reels. And, it’s another exciting Megaways high variance slots for real money albeit with a horror theme. Besides, there’s no doubt that the Megaways slots are the next generation of online slot machines. We totally dig them!

Before we dive into the specifics of Beetlejuice Megaways. The younger generation, or to be more specific the Millenials, may not be familiar with it. The slot game borrows its theme from the 1988 cult movie of the same name. So, who exactly is Beetlejuice? Betelgeuse or Beetlejuice is a trickster and a mischievous ghost. The plot of the film is about a couple who died and who haunt their former home. Let’s just say that the evil spirit, Beetlejuice complicates matters for them. Barcrest powers Beetlejuice Megaways. If memory serves us correct it’s still a relatively unknown software provider. But, it’s also our first slot review from the developer.

Is Beetlejuice slots worth your time and money? Definitely! First, there is the Megaways mechanic. Second, it sports an incredible amount of lines. Furthermore, it runs on the Cascading System and it has unlimited multipliers! Let’s not forget that it has a Free Spins feature with unlimited multipliers. Beetlejuice Megaways is no slouch in the jackpot department either. It offers a jackpot (non-progressive) of 6,220.8x your stake (€250,000). You can play the game from £€0.10 to £€500 at our best UK online casinos. That’s a whole lot of juice right there! 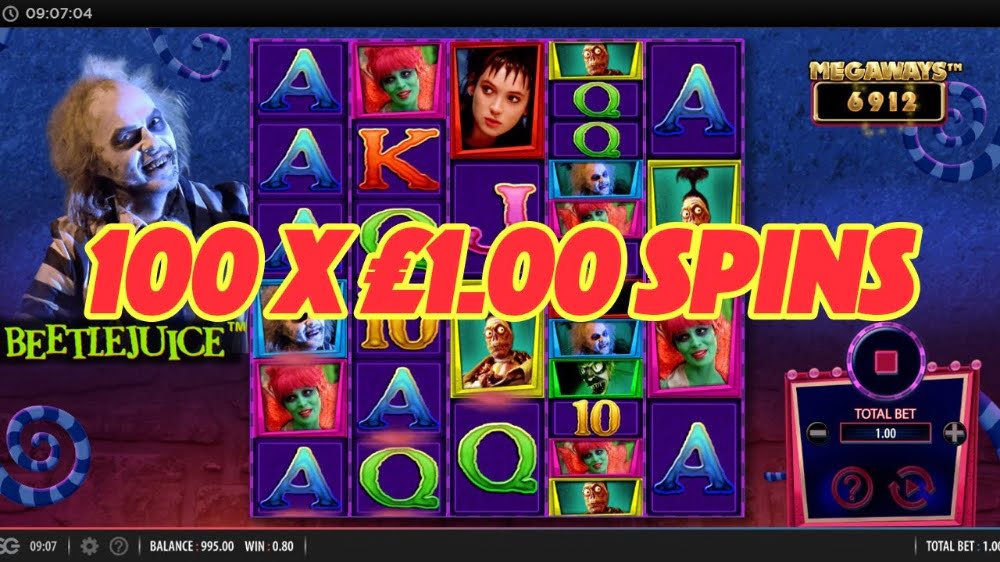 Beetlejuice has an RTP (theoretical return percentage) of 96%. However, because it is a high variance real money online slots. The actual RTP is 94.06%. If we turn our expert slots gaze towards the Hit Frequency. We reckon it’s in the region of 12% to 15%. On that account, you must grind it out for the big wins. We played the free slots version and we received a payout on every 7 to 8 spins. The symbols that appear on the reels are colourful, and they complement the theme. But, what impressed us is the mechanic that runs the slots.

Towards the top-right end of your screen is the Megaways lines. It ebbs and flows like the tide on a full moon. In other words, it fluctuates a lot since it can be as little as 200 ways up to a gargantuan 248, 832 ways. Now, the symbols on the reels are almost life-like. And they are the same symbols that appear in the Hollywood blockbuster film.

We’re not going to mention every single symbol because there are a bunch of them. Instead, we’ll just cover the symbols that you should focus on. They are Beetlejuice (Michael Keaton), Miss Argentina (Geena Davis), Alec Baldwin, Lydia (Winona Ryder), and the snake. The other symbols are the scatter and the wild. The top symbol is Beetlejuice when 5 pitch, you’ll pocket 5x your stake. A feature that strikes us about the reel set is that the top half is blank. The bottom half contains the symbols. The moment you score a winning spin, it changes dramatically because the entire grid becomes active! Anyhow, once you fire up the game you’ll see what we mean. If you’re from the States check out our USA online casinos. They offer you massive bonuses on deposit and they accept Bitcoin. 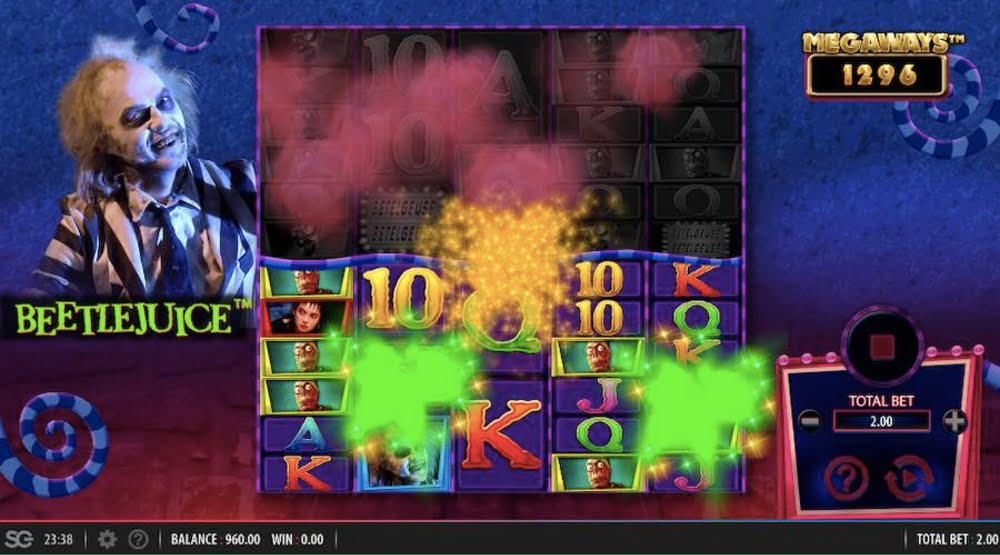 By all that’s Holy! Beetlejuice Megaways has a slew of bonus rounds including Cascading Wins. The latter feature occurs when you hit a winning combination. The winning symbols disappear and new symbols replace them. As a result, you can receive successive wins on your initial spin!

During a winning combination, the top half of the reels opens up. Long story short, 12 symbols pitch which cranks up the game’s juice to an amazing 248,832 ways to win. Welcome to the Mighty Ways feature!

Keep your eyes on the ghost symbol because it kinda makes a nuisance of itself. However, we mean it in a good way of course. The ghost symbol triggers the Mystery Symbols bonus round and it transforms adjacent symbols for cascade wins.

Even though the former in-game features are important, we’re just glad that it has a Free Spins feature. To be honest, the free spins is what sells the game to us. It also takes the edge off an otherwise very volatile RTP. But, before you can run with the Beetlejuice gang, you have to trigger it first.

The symbol you want to see is the Betelgeuse scatter because it is the symbol that unlocks the Free Spins feature! You need 3, 4, or 5 Betelgeuse scatters to trigger the free spins. When they pop up, 3 scatters award 8 free spins, 5 awards 12, and 5 scatters a cool 16 free spins. Now, the free spins feature scores a few home runs with its unlimited multiplier. On every winning spin or cascade, the multiplier increase by 1+. Technically speaking, there’s no limit to the size of the multipliers. And, you can re-trigger the feature indefinitely!

Beetlejuice Megaways stands out from the previous Megaways slots releases. For the simple reason, the top half of the reels are empty. Our first response was, okay this is interesting. There’s plenty of moving parts at play here too.

We compliment Barcrest with the visual fidelity, but it Is the cascading mechanic that really makes it work. For the simple reason, everything else pivots around it. For example, when you hit a winning combo, the reel set changes. Let’s not forget about the unlimited multipliers and extra free spins! The only thing where Barcrest slipped up is that it caps the jackpot at £€250,000. Therefore, even if you bet the maximum £€500 per spin, the top cash prize remains stuck at that amount. Did Barcrest pull it off? Aside from the jackpot, yes, it did. If you’re want to play a Megaways slot machine that trades no punches. We highly recommend, Legacy of the Gods Megaways.