I’ve always been a fan of King Arthur and his knights of the round table. It resonates well with people from all walks of life and his heroic exploits echos across the centuries. Come to think of it, it kinda makes sense why Microgaming decided to roll out a slots based on this iconic king and his exploits. Based on its predecessor (Avalon I), Avalon II offers way more when it comes to overall entertainment and payouts. Without a doubt the highlight of the game is its Grail Bonus Feature.

Avalon II 3D online slots has 8 distinct bonus games laced with free spins, rolling reels, scatters, trailing wilds and multipliers. In my humble opinion it does give the player a sporting chance at winning a decent amount of cash. With 243 ways to win and 5 reels the game is simply dynamite. It comes with a medieval theme where the Arthurian legend comes to live across the reels. Your mission in the game is to find and to restore the grail to its rightful owner.

Avalon II is a medium variance slots where the RTP (return to player) is 96.5%. The total non-progressive jackpot is 120,000 coins. It pays out regularly during the main game but larger wins are reserved for the free spins games. This is a browser-based slots and can be played on the latest mobile phones (Androids, iPhones, tablets and iPads), Apple Mac and Windows desktops. 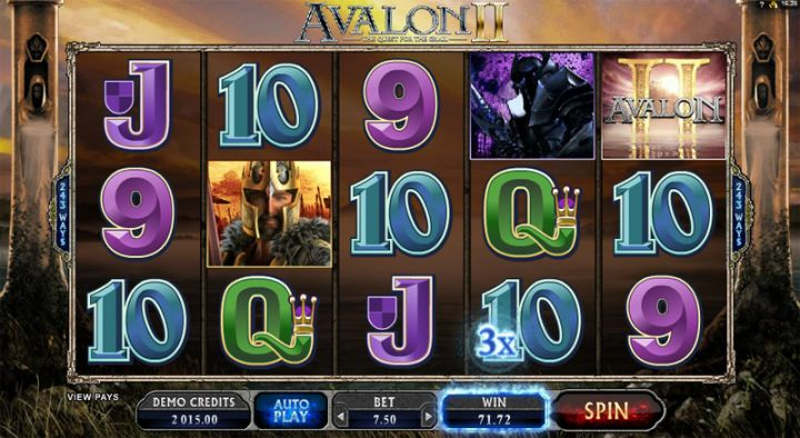 Before you embark on your quest for the Holy Grail select the amount of coins you wish to bet per spin. Depending on the size of your bankroll, bets can be made from a £$0.30 up to £$7.50 per spin. Normally the base game doesn’t offer much when it comes to payouts.

I’m happy to see that Avalon II had the player in mind this time round. It offers 2 random features during the main game that can be triggered randomly. The first feature is the Merlin icon. When it pops up on the reels you’ll receive a cash prize with a multiplier of up to 20 times your stake. The second feature is the expanding wild. When it appears on the centre reel it replaces all the other symbols adjacent to it offering you a nice win.

Avalon II is an epic slots since its main selling point to players is the ‘Grail Bonus’ which features 8 distinct bonus games, each with its own cash rewards. It’s triggered when 3 or more Grail Bonus icons appear randomly any place on the reels. A new screen opens up and you’ll start your quest for the Grail. Additional free spins can be won when you re-trigger the Grail Bonus feature.

My initial thoughts were phew, this is a lot of information to assimilate but soon realized that it’s not the case when I started playing Avalon II. The 3D slots plays relatively easy and it’s very entertaining to boot. Although the base game offers reasonable payouts it can’t compare to the payouts offered during the free spin bonus games (8 of them!). If you play at the max. bet per spin (£$7.50) you can win a payout of more than 16,000 times your stake. The Forrest falls is the pick of the bonus games because of its trailing wilds feature. When a couple of them appear you’ll win a hefty chunk of cash.