Based on Norse Methology NetEnt’s Asgardian Stones is a 20 payline, 5 reel, 3D online slots with astounding visual animations and soundtrack.  This 5 reel 3 rows 20 payline game is played on 2×2 and 3×3 grid with Colossal symbols.

Bonus feature wise it’s decked out with a ‘Colossal Crush‘ feature where rows of symbols are crushed by it. The crushed symbols are replaced by new ones offering multiple wins in quick succession-multipliers increase wins by 1x up to 4x.

There’s more! The Bonus Wheel is the star of the show it awards up to 25 free spins when it pitches plus the Colossal wilds boost wins to the tune of 2,000x your stake on single free spin!

”You’ll succumb to an enjoyable experience that splits the difference between mythology and real game action. Asgardian Stones is an unforgettable slots rich in graphics and bonus action that will blow you away.” Casinowhizz.com

Asgardian Stones can be played on mobile devices and PCs from 20 pence up to £200 per spin. The gates of Asgard are protected ancient magic that’s so powerful it’s as old as time itself. The game has 4 bonus features starting with an Avalanche, Colossal Crushes and Bonus Wheel and free spins.

Symbols on the reels are the various gods of Norse mythology, ancient runic signs (Q, K and A) and the highest value god stone pays 25x your line bet when 5 appear on a payline. The symbol with the ‘W’ on it is the wild, it replaces the other symbols adjacent to it when it forms a winning combination except the Bonus Wheel icon.

The slots offers a theoretical return to player percentage (RTP) of 96.4%.

”With most you have to wait for the bonus games or the free spins, but not with this Asgardian Stones NetEnt slot. Any spin, at any point, can lead to a culmination of big wins of up to 2,000 times your bet.” 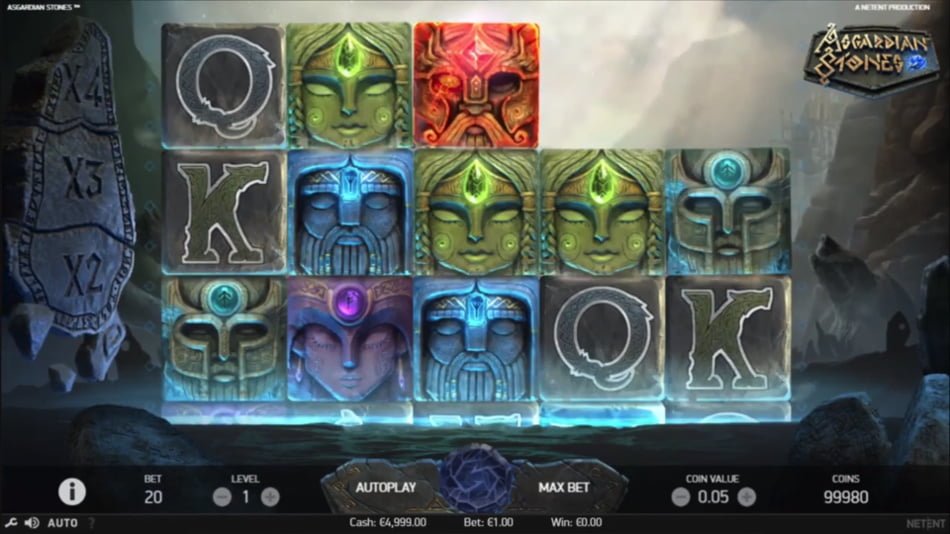 Another feature that strikes us about the game is that players with different bankrolls can play it. Winning symbols explode, they disappear while the second Avalanche bonus kicks in which awards multiple wins on every spin.

The Colossal symbols are the big blocks of 2×2 and 3×3 and aid in building winning combinations. During the main game that help initiate the Colossal Crush feature that’s also responsible for triggering the free spins bonus. The Colossal symbols crush all the other symbols they fall on which results in bigger payouts, each win has a multiplier of 1x to 4x attached to it.

The Bonus Wheel appears when 3×3 bonus wheel symbols pitch on reels 3, 4 or 5. When the Bonus Wheel spins it reveals a cash prize that pays as much as 5x your stake or you can win a bunch of free spins.

The Bonus Wheel also contains 3 free spins segments up to 25 free spins can be won. During the free spins the colossal wild splits into 1×1 wilds boosting payouts by a substantial margin. Basically the wilds explode and replaced by new symbols, if you don’t get a winning spin they remain on the reels until you receive one.

NetEnt’s Asgardian Stones has a lot going for it bonus wise and we’re impressed with the game mechanics of the slots. Once triggered the free spins feature awards up to 25 freebies along with those Colossal Wilds that pays a hefty 2,000x your stake on a single spin, it’s by no means the biggest out there but still generous enough.

All in all it’s a great game that’s worth the hype. We couldn’t take our eyes of the screen, the stone symbols drop and crush everything in their path not to mention the rising multipliers (up to 4x) which keeps the bankroll ticking over.