RealTime Gaming’s Asgard, All Ways video slots introduces a new slice of medium-denominational game play that combines one of the most popular themes that’s teeming with bonus features.

The game teleports you to the world of the Norse gods, the rulers of Asgard a place situated within the nine worlds of Norse mythology. The slots can be played on mobile phones or PC desktops for real cash or for free at RTG powered casinos.

”The Norse gods are waiting to power you on to massive wins with Real Time Gaming’s slot release, Asgard. It’s a bold and thunderous slot machine that immerses players into the realm of the gods, allowing them to engage with characters such as Thor who they will recognize from the Marvel movie franchise.”

To reel you in with excitement this 5×3 reel, all-ways payline online slots brings you the same characters of the Thor movies we’ve come to love and hate: Thor, Odin, Freya as well as the devious and ever-scheming Loki-these are the high value symbols. Asgard pays a top non-progressive jackpot of 6,000 coins and has an average payout percentage of just above 96% to the player (RTP) or an edge to the house of 4%.

The nuts and bolts of Asgard comes with an assortment of bonus modes each represented by a Norse god: It’s fitted with 4 impressive free spins features that awards 15 to 30 free spins with bonus wild multipliers of 3x (tripling all wins), extra wilds and morphing symbols. The base game is no slouch either, players can benefit from a Thunderbolt feature that’s activated randomly turning 5 reels fully wild. 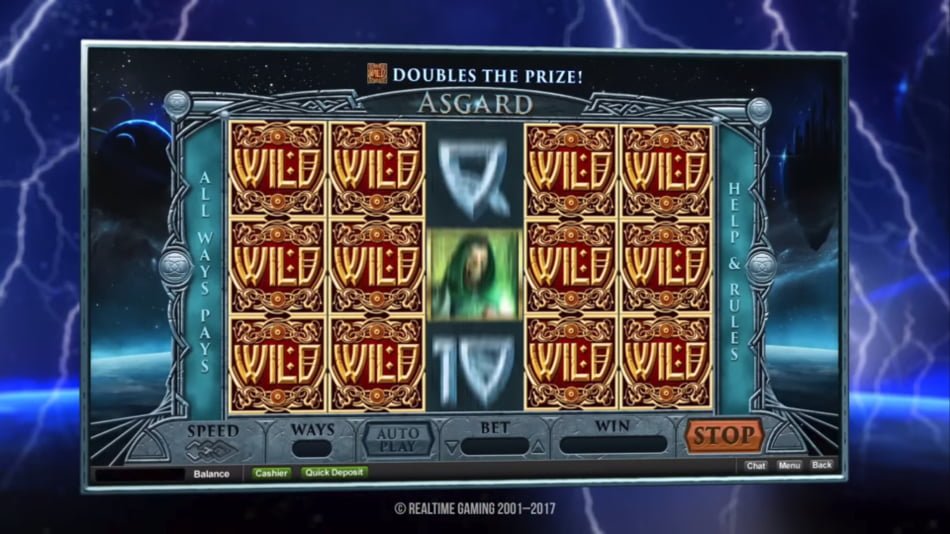 Due to its medium variance volatility we advise you to play the game with one eye on your bankroll. We find it to be a well-balanced slots with the potential for some big wins during the main game but more so during the bonus modes (free spins).

Asgard slots has a number of special features worth mentioning. The Doubling Golden Wild (doubles all wins) completes a winning combination when it replaces symbols adjacent to it bar the scatter. If you manage to land 5 scatters you’ll pocket a neat 1,250x your stake while the multipliers during the free spins can shoot up to 5x, hooked yet?

There are 4 re-triggerable free spins features each has its own set of wilds, multipliers and morphing symbols.

A free spins mode is initiated when 3 or more scatters appear any position on the reels. The Goddess free spins feature sees you pocketing 15 free spins along with tripled multipliers.

Since Loki is the bad apple among the lot he’s trying to make up for this by giving away 20 free spins where a wild boosts payline wins but only if it pops up on the third reel.

If you don’t know who the god of thunder is it’s Thor, he’s quite generous since he awards you 25 free spins that’s laced with wild multipliers from 2x to 3x. Should the Wild Multiplier appear in conjunction with the Golden Wild, multiplier wins will be multiplied by 4x to 6x.

The Valhalla free spins is played from the 15th trigger and up, once triggered it awards 30 free spins with morphing symbols. Anticipation is further increased when symbols morph into each other, the net result is jaw-dropping payouts.

Once the payouts have been given, winning symbols disappear from the reels which leaves a spot for the new symbols to form another winning combination. The re-spins awarded have multipliers of up to 5x, if you re-trigger the feature you’ll pocket another 5 free spins.

RTG’s Asgard propels the fan-favorite slot experience with 5 impressive in-play bonus modes of which 4 are free spins while the other one occurs during the base game. The slot machine has a lot going for it; doubling wilds, fully wild reels, multiplier wins of up to 6x, loads of free spins, re-spins and a cracking jackpot. Wrap all these goodies up under one banner it’s guaranteed to ignite a lot of excitement.