Artemis vs Medusa from Quickspin is another ‘fresh take’ on ancient Greek mythology. The slots for real cash online pits two ‘lessor Greek gods’ against each other. You’ll see the beautiful goddess Artemis take on the foul gorgon, Medusa. Suffice to say, with hair brimming with snakes and an evil eye that can turn anyone to stone. Medusa is the stuff of legend. 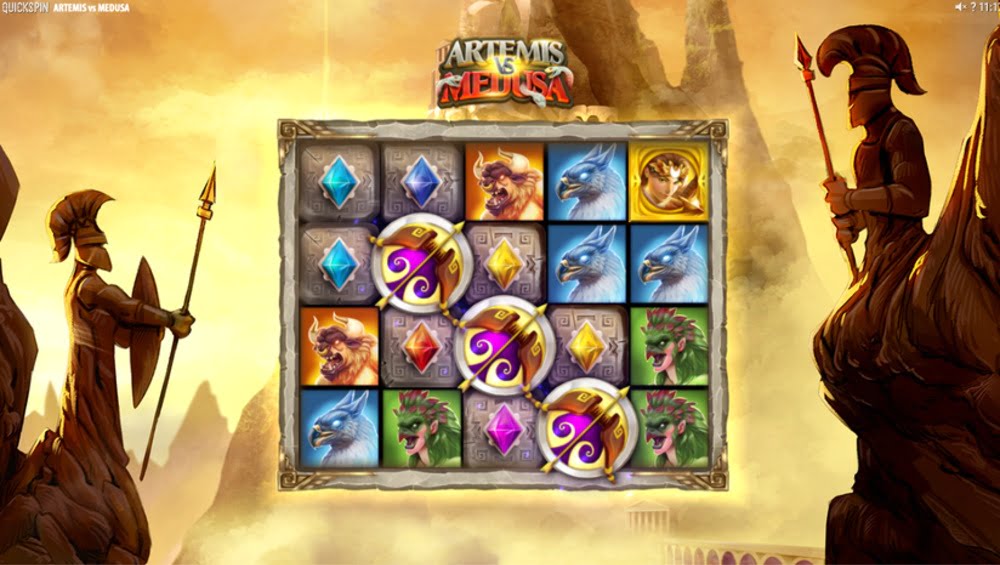 The volatility of Artemis vs Medusa is medium to high variance. As a result, it’s quite sharp on the pocket, yet you’ll see a winning spin often. Online slots fans of Greek mythology will note that the ancient Greece theme surfaces yet again. If you’re jonesing for a fix on Greek mythology you’ll find it right here. You can play the slots for real money from £0.20 to £100 per spin at our best mobile casinos. They employ HTML5 technology with a special user interface for mobile slots players. We suggest you play the game in portrait mode because it looks decidedly superior on your phone.

Furthermore, Artemis vs Medusa offers a jackpot of up to 5,288x (£528,800) your stake. The action occurs on a 5×4 reel grid and 1,024 Ways to Win. Special features such as an Unlimited Battle Free Spins, and the Monster Bounty Coins; ease the volatility blues. Without getting ahead of ourselves it looks like another classic performer from Quickspin. 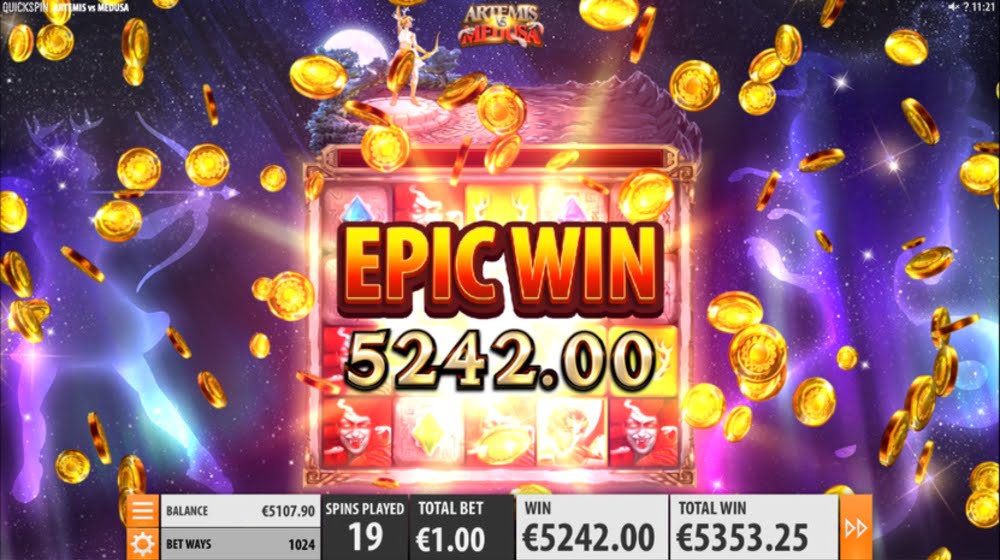 The RTP of Artemis vs Medusa is 96.17%. The base game carries an RTP of 44.76% while the RTP of the Monster Coin feature is 22.56%. When we turn our slots gaze towards the Unlimited Battle Free Spins. The RTP is significantly higher at 28.85%. Overall, the volatility clocks an 8/10 on the Casinowhizz.com slots scale. Players from the United States can’t play this slot machine, unfortunately. It doesn’t mean they can play the best Betsoft slots 2020 at our safe USA casinos online. If you’re looking for the best deals on this side of town, do check them out.

Mount Olympus, the abode of the gods serves as the backdrop for the reels. The symbols that appear on them are 6 colorful gems. Incidentally, they’re also the low-value symbols. The high-value symbols are the Griffon, Medusa, Minotaur, and the Harpy. Artemis is the top symbol, when 5 pitch, they offer a payout of 25x your stake. The golden antler is the Wild symbol. It replaces any symbol adjacent to it during a winning combination except for the scatter. 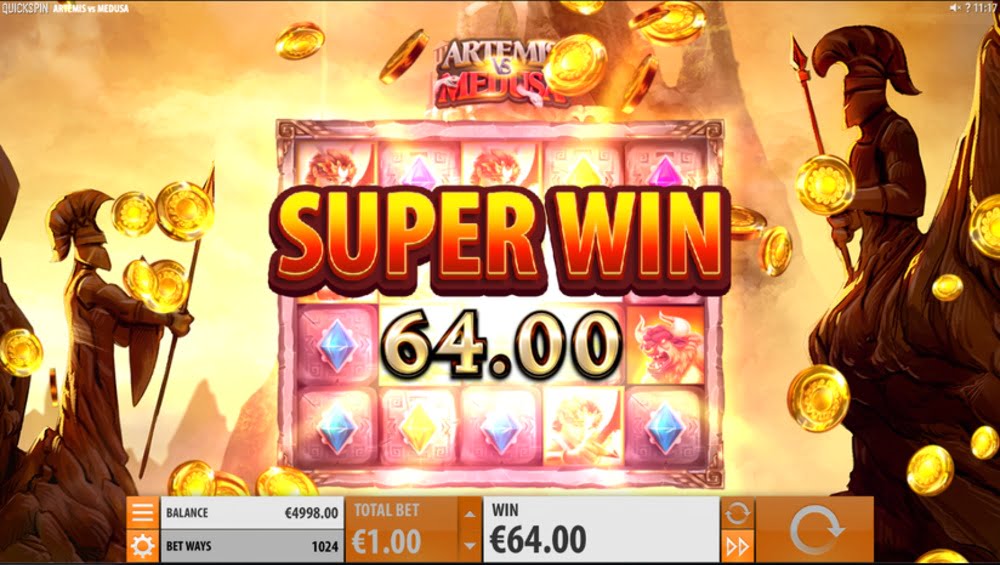 Artemis vs Medusa has two special features namely the Monster Bounty Coins and the Free Spins. During the latter feature, Artemis the daughter of Zeus battles against Medusa. If you want to see how the epic battle plays out, you must trigger the free spins feature.

Keep an eye on the Harpy, Minotaur, Griffon, and Medusa. When they appear in the base game they can pop up with a Monster Bounty Coin in them. Now, when Artemis appears on the last reel. You’ll collect all the Monster Bounty Coins for a Bounty cash prize.

The scatter symbol is the bow and arrow symbol. When three of them appear on the middle three reels, you’ll trigger the Free Spins feature. To us, it’s an extraordinary free spins feature because there’s no set amount of free spins. Therefore, you can receive any number of free spins until you defeat the evil Medusa.

It’s not only Medusa that appears on the reels in the Free Spins. You’ll see the Minotaur, the Griffon, and the Harpy. Keep your eye on the meter because every time you strike a winning combination it increases. In other words, when one or more Artemis symbol appears along with a monster symbol. You’ll win a bounty cash prize when Artemis appears. She removes the lowest to the highest value symbols from the meter.

At the same time, you’ll receive a bounty cash prize. As she shoots the Minotaur or the Harpy they explode into coin symbols. Besides, the free spins feature ends should the meter have more than 15 monster symbols, or when you defeat Medusa. Because it’s a medium to a high variance slot game. It can take as much as 80 spins to initiate the free spins. At an average bet of £8 per spin, we’ve seen payouts of up to £4,200 (600x your stake). Which is spectacular, to say the least!

Artemis vs Medusa from Quickspin captures the essential feeling of Greek mythology. The graphics of this ‘hack-and-slash’ slots brims with slick visuals and it sports an epic audio track. With a jackpot of up to 5,288x your stake in the Unlimited Battle Free Spins; and thanks to those bounty payouts. The free spins feature gives you plenty of free spins to see off those monsters.

However, just as long as 15 or more of them don’t appear in the meter, you’ll be right as rain. On the whole, it’s another big-action slot for real cash from Quickspin. The combination of its sprawling visuals and exciting bonus rounds makes it more than just a skill development. It’s relatable to almost everyone. If you had a blast we suggest you try out Medusa: Fortune and Glory