Ancient Gods is an Asian themed video slot powered by RealTime Gaming, it comes with 25 paylines (adjustable) and 5 reels. It’s eloquently dressed with cracking visuals (kudos to RTG), has a re-triggerable free spins feature that awards 10 free spins from the onset with multipliers of 3x, strictly speaking up to 20 free spins can be won.

The developer did not disclose the RTP (average return to player percentage) of the slots, we have it on good authority though that it is above 96%. The top cash prize (non-progressive) that can be won on a single spin is 7,500x your stake.

Symbols on the reels are the snake, red and green dragons (wild), tiger, turtle, phoenix and the golden medallion with green gemstones in it (scatter). This slot can be played at our best US online casinos. 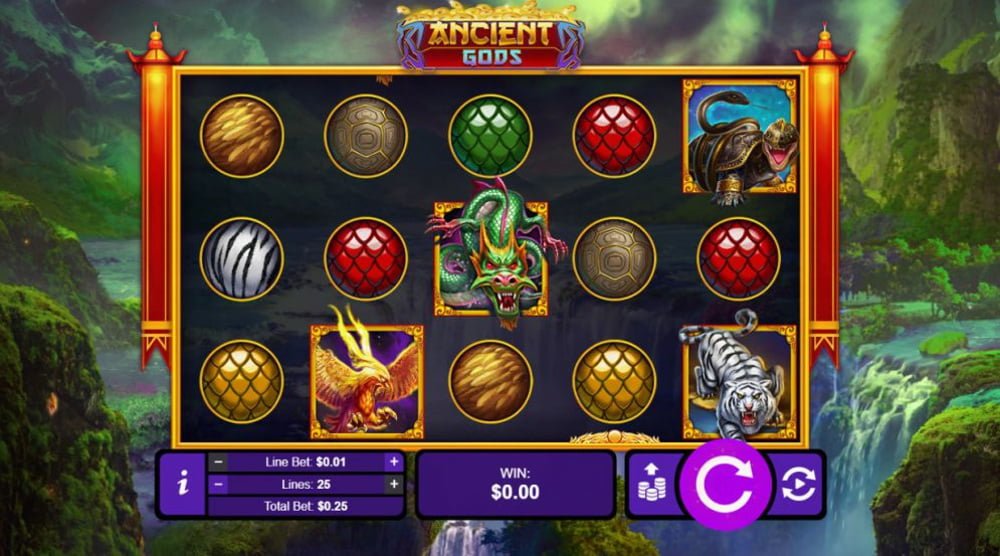 Ancient Gods can be played with different bankrolls, base game wins hover around 5x up to 30x your stake. The slot machine is compatible with mobile phones and PC desktops (Apple Mac or Windows). The control panel incorporates graphics/audio settings, average bet per spin, Auto Play and the Help Screen (i). Mobile players must tune on their Wi-Fi because the graphics are sharp, normal data will be chewed up in no time.

The yellow dragon is the wild symbol, winning combinations are completed by it when it substitutes symbols adjacent to it bar the scatter symbol.

When 4 scatters pop up on the reels all wins are doubled, but if 5 Golden Medallions appear, each free spin win spews out a not too shabby multiplier of 3x. In other words payouts will be tripled! Furthermore, extra Center Dragon wilds appear too during the free spins responsible for the big wins.

Has RTG stepped up to the plate with Ancient Gods? Absolutely, not only is the game laden with crisp and colorful game art, the wild doubles wins during the main game and it has a re-triggerable free spins feature with multiplier wins of up to 3x! It’s a well-balanced slots that pays well during the base game but even more so during the free spins.